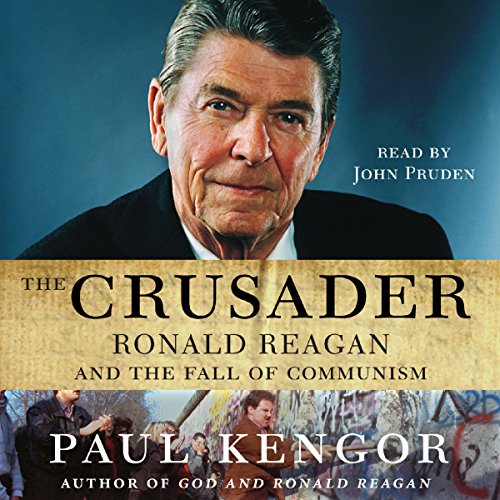 By: Paul Kengor
Narrated by: John Pruden
Try for $0.00

Based on extraordinary research, here is a major reassessment of Ronald Reagan's lifelong crusade to dismantle the Soviet Empire, including shocking revelations about the liberal American politician who tried to collude with the USSR to counter Reagan's efforts.

God and Ronald Reagan made presidential historian Paul Kengor's name as one of the premier chroniclers of the life and career of the 40th president. With The Crusader, Kengor returns with the one book about Reagan that has not been written: the story of his lifelong crusade against communism and of his dogged and ultimately triumphant effort to overthrow the Soviet Union.

Drawing upon reams of newly declassified presidential papers as well as untapped Soviet media archives and new interviews with key players, Kengor traces Reagan's efforts to target the Soviet Union from his days as governor of California to the fall of the Berlin Wall and the collapse of what he famously dubbed the "Evil Empire". The result is a major revision and enhancement of what historians are only beginning to realize: that Reagan not only wished for the collapse of communism but had a deep and specific understanding of what it would take and effected dozens of policy shifts that brought the USSR to its heels within a decade of his presidency.

The Crusader makes use of key sources from behind the Iron Curtain, including one key memo that implicates a major American liberal politician in a scheme to enlist Soviet premier Yuri Andropov to help defeat Reagan's 1984 reelection bid. Such new finds make The Crusader not just a work of extraordinary history but a work of explosive revelation that will be debated as hotly in 2006 as Reagan's policies were in the 1980s.

What listeners say about The Crusader

Whether you like Reagan or not, you will miss him after reading this book, especially when considering the state of affairs today.

What made the experience of listening to The Crusader the most enjoyable?

Learning about newly released documents that had been previously classified has added so much to the depth of our understanding of importance of Reagan's place in history.

What other book might you compare The Crusader to and why?

The Communist by Kengor. The story of Obama's "Frank". Flip side of the coin.

Loved it, as an exiled Cuban that lost his homeland to communism, this was a tremendous read about our 40th president's influence on the downfall of communism in the USSR and the breakup of the "Evil Empire."

We Know The Ending

We know how this story ends. New unclassified documents give new insight. Narration is substandard.

excellent book about a phenomenal president

Loved this book. Kengor did an enormous amount of research into Reagan's life-long crusade against the evil of communism then makes it all accessible and fascinating. Importantly, Kengor interviewed many key officials in the Reagan admin as well as the former Soviet Union. He weaved his mountains of facts and interviews into an accurate history of Reagan's successful fight against the Evil Empire.

Was hoping for pros & cons to policy & decisions. Story is fine but incomplete picture.

A gem for those that know little of Reagan's legacy, and enjoy learning that leads to a paradigmatic shift.

I was ignorant of Ronald Reagan's legitimate impact on history prior to reading this book. This book literally changed the way I judge anyone. We truly never know the intentions of others and would all be better admitting that and seeking to learn before opening our own mouths with gross assumptions and cynicism. I am changed from indifference to a passionate fan of Ronald Reagan, The Crusader.

Excellent review of one of America's greatest presidents who lifted us from the cold war threat of nuclear conflict with the evil (socialist) empire, USSR. Great narration, easy listening.

Interesting and focused on one subject matter

This book is utterly focused on Reagan's approach to communism. The narrator when quoting Reagan sounds eerily like him. The book begins with Reagan's life as a life guard, through to his election as president and then finally his alzheimers disease. I enjoyed listening to this book whilst walking the dog and cooking and there were several chapters that really captured the essence of the people behind the Iron Curtain. The book covers Reagan's relationship with Gorbachev and Pope John Paul II very well. It also covers and provides evidence of Ted Kennedy's softly softly approach to the Kremlin; often in an undermining way. By the time I listened to this book I was very well informed by Reagan's very personal stamp on his presidency and I think that but for his specific approach to the USSR, it could still be in existence now. This book clearly establishes that the Iron Curtain did not fall accidently. Anyone interested in recent political history and communism should listen to this book.

I found this book very informative. It provided a great insight to the history of communism, the cold war and the Soviet Union. Additionally it gave me a better understanding of America's polotical system.