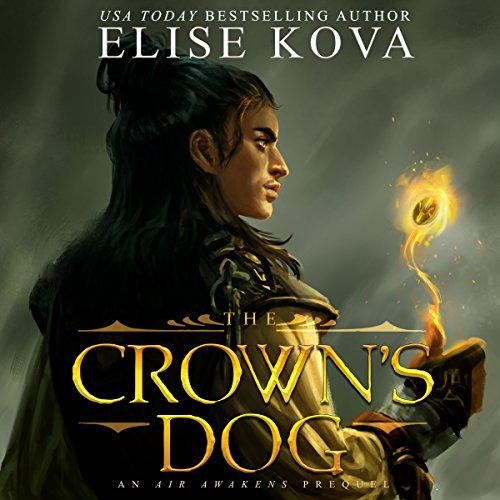 By: Elise Kova
Narrated by: Zachary Johnson
Try for $0.00

Book one in an Air Awakens prequel trilogy.

A coastal summer is turned upside down by a violent murder, and a quest for lost pirate treasure turns into a hunt for the killer.

Jax Wendyll is the crown's dog. As punishment for the unspeakable crimes that torment him to this day, his life has been conscripted to the Empire Solaris. However, in an empire afflicted by peace, his duties are relegated to unquestioningly aiding the antics of the youngest prince, Baldair.

Erion Le'Dan, a nobleman's son, expects a quiet summer visit to the Imperial Palace, his only agenda to visit with his unlikely friends. But Jax's discovery of the legendary pirate Adela Lagmir's old workroom inspires a hunt for her long lost treasure.

The pursuit of Adela's truth takes the three men to the imperial summer manor, built along the old pirate mainstays. When Adela's trident is branded into a murdered servant, Prince Baldair's summer amusement of treasure-hunting becomes a hunt to find the killer. But, as mysteries compound, the ghosts of Jax's past may not be the only things haunting them.

What listeners say about The Crown's Dog

I found this prequel story interesting, but slow at times. I actually sped up the narrative to 1.5X, something that I never do.

Jax calls himself the crown’s dog after an accident that he will never forgive himself for. Prince Baldair begs for his life and he becomes a guard to the 2nd son of the Emperor Solaris. When Prince Baldair indulges in his favorite pastime of deflowering the ladies at court, Jax discovers a secret room with a map to a legendary and dangerous treasure. Baldair, Jax, and their childhood friend Erion take up the hunt in the imperial summer manor. They soon grow bored and pick up their normal pursuits of drinking and ladies when the entire town clams up about the pirate Adela. But one morning Jax finds a dead woman in his room. A dead woman with the pirate Adela’s trident carved into her hand. Baldair decides he and his two friends will find the murderer and the hunt is on again.

As a first in a series, this listen was rather fun. Jax is tormented, mischevious, and complicated because of his past actions. He does the best he can but it becomes clear that he is a much different person now than he was three years ago when he was conscripted into the prince’s service. Baldair is fun loving and doesn’t take much seriously and Erion is so duty bound and proper that he is the perfect opposite to his friends. I would have liked more questions answered before the book ended but I guess I will have to look for the other books in the series to answer those.

The narration was quite good from Zachary Johnson. I have listened to him before and enjoyed his accents. He was the reason I chose this audiobook. His accents are really well done and I always know who is speaking. I will look for more from him!

A Killer is on the Loose..


This book was well written with developed characters Erion, Baldair, and of course, Jax.

This novel had a little bit of everything including friendship, a mystery, action, pirates and


Zachary Johnson did well with the narration.

Would you consider the audio edition of The Crown's Dog to be better than the print version?

Reading the e-book and having it narrated to me made my experience with this story so vivid. I could see the characters acting before my eyes. I think that if I had the print version, it would be a completely different experience. But there is no right or wrong way to read this book. Its about the story.

Can't pick favorites when I absolutely LOVE every single character.

The narrator, Zachary Johnson, does a really great job of bringing in the different accents of the Westerners and the Southerns to life. When I listen to an audiobook, I look for a very animated, motivated, style of narration. And Zachary Johnson definitely brings that to this book.

I laughed. I had some tears (because Baldair :`[ )

The Crown’s Dog was an audio that basically took up my entire day. I ate, worked, and even slept (oops) while listening to it because the mix of engaging story and Zachary’s reading was just too good to hold off on.

Our story focuses on two point of views, Jax and Erion. Jax is a sorcerer who has been conscripted to the service of the youngest prince. He has a past that haunts him, which we do get to see bits and pieces of, and throughout this story he is struggling to overcome the doubts and pain that it brings him. Despite his gloom he is really witty and has plenty of dry humor to go around. Erion is the more refined and quiet man in the group, he is more at ease playing the gentleman than the brash fighter. He has wit but he’s mostly focused on keeping the other two from allowing their quick wittiness from getting them killed. I really liked the hints at a strong friendship between Erion and Jax, but I really want to see more. They have a past together and it would be great to have that foundation, because Erion spends a lot of time worried about Jax’s current mental state. Baldir has a lot going on as well, he’s a playboy who is fighting the reputation he’s rightfully earned.Put all three of these men together and it’s like the perfect trio of humor and thanks to the narrator amazing accents.

I really loved the mystery element to this as I wasn’t expecting to play such a big part, and I loved getting to know more about the kingdom through the clues and inquires through out. However there were some elements that I wish I had learned more about, like the Crystal wars which are mentioned several times. It does seem like we might get more info on that in the next book though, so I’m hopeful. The magic is fairly cool as well and it’s interesting to see how it’s taken culturally depending on region.

Zachary Johnson’s work is phenomenal! He does a variety of really convincing accents AND even sings a bit! He has excellent pacing and his reading is animated, he really seems to get into character and it makes for an fun listen.

This series shows some real promise and I’m looking forward to further installments!

I received this in exchange for an honest review.

I'll be watching for more of the Golden Guards.

Would you listen to The Crown's Dog again? Why?

Yes, I love the accents which made the banterish dialogue even more fun.

The accents were different for every character. He also does a great job of imbuing each with personality right from the start. If I were reading, it would take longer to come to those conclusions.

Ghosts and curses can't hurt you if you don't believe in them, or can they?

This is my first experience with Ms. Kova's Air Awakens series. I found out, after the fact, that this is a prequel trilogy but it was intriguing and fun nonetheless and I didn't feel lost not having read the others. I haven't read a pirate queen story in ages so this was a nice diversion. Ms. Kova's handling of the magic and sorcery is seemless,as well as the tension between high and low borns. These three men, though often they felt like overgrown boys, certainly bear further watching. Her other trilogy is on my TBR list now.

What did you love best about The Crown's Dog?

The world structure. I like how we were given background about the world before things got interesting.

What other book might you compare The Crown's Dog to and why?

None really. I was on the shorter end of that I listen to.

I honestly can't answer that. I would need to listen to more of his stuff.

I was given a copy of this book free of charge by the narrator in exchange for an honest review through Audiobook boom.

Murder mystery in a magic world

This is enjoyable, quick mystery fantasy novella. It's actually much more of a mystery/police proedural type book than I expected, and it is all the better for it.

The story follows Jax, a foreigner and a sorcerer, as he works for the prince. He is haunted by his past actions, those that branded him as a criminal. A strange murder, and and old prejudices against strangers and magic, puts Jax and his regal friend / boss into the middle of a mystery that could mean great gain for them, or could mean Jax's life.

The key mystery (mysteries) of the book are engaging and keep you on your toes. The characters are well thought out and feel like real people. The world building is good, with an entire world and history outside of the story regularly referenced and hinted at. The world feels 'real' rather than just a canvas for the story to take place.

The narration by Zachary Johnson is a mixed bag. Generally he is great. He does accents and voices, and imparts emotion into the characters. He added a huge amount to making the characters and the action engaging. However, the pacing is all over the place. There are random pauses mid sentence all over the place. There are long pauses at the end of sentences that are just too long and break the flow.

Someone just needs to go in and cut a lot of the dead space in the audio and it would have been great, but as it is it is really distracting and, at times, a little painful to listen to.

Loved being back in this world. Elise Kova doesn’t disappoint.

Great narrator but for the love of… the mother, please don’t ever let him sing again. Beyond painful.