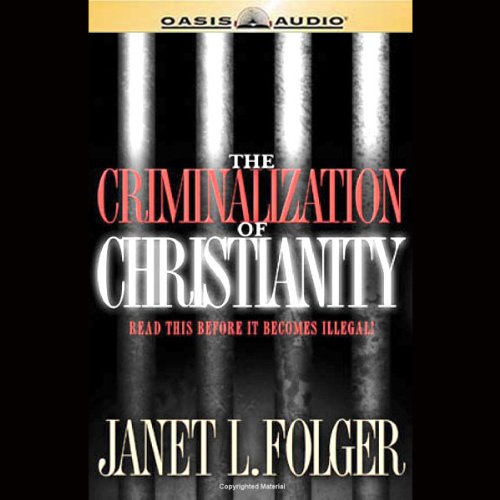 The Criminalization of Christianity

There is a war going on for the future of our country. Most people know that. What they may not know is that if Christians lose, the result won't merely be enduring public policy we disagree with, it will be a prison sentence for those who oppose it. We've all seen the attack coming. First the Supreme Court said kids can't pray in school. Then the Ten Commandments were ripped from the classrooms. Now pastors are being removed from their pulpits and put in jail for speaking out against homosexuality (Sweden). And things are only getting worse. How in the world did we get to this place? And why is it that Christians are singled out in this assault on morality? Serving as a wake-up call for America, this book will expose the truth that Christianity is being criminalized and that we must stand up against it now.
©2005 Janet L. Folger (P)2005 Oasis Audio LLC

What listeners say about The Criminalization of Christianity

If you are conservative you will like this book. If you are liberal you will hate it. It pretty much boils down to that.

The writer/narrator was very excited about her topic and it shows thoughout her reading. It comes across very well.

Right on the Button

At this time when Christian persecution in America is at an all time high, this book energized and angered me. I have a boldness of the spirit after reading this. It may offend some But the Truth often offends those who subscribe to "moral relativism" instead of RIGHT amd WRONG. As it was predicted we will be perscuted even more and I sure felt it at Christmas time when I was "encouraged" to be politcally correct. I never said "Happy Holidays" to any one...but Merry Christmas" to many. I rececommend this book to all.

She truthfully draws the line

If you are a Christian and see the assault taking place to undermine faith in our country, you will enjoy the reading because you agree with it. Her observations are accurate. The disdain and slander thrown at this piece makes her point perfectly.

The lobster is a warm pot

The true Christian of today knows that the LORD GOD is in control. It is the "I think I am a Christian and the I am definitely NOT a Christian" for whom this book was written The book is clear and factual. The lady is just and correct in her observations of what is coming and what has already happened.

Like the lobster in a pot with the heat slowly raising the "Christian" of today is unaware of what is going down around them. The Sodomites are true God haters who know that what they do is completely un-natural. I very highly recommend this book as it is frank, honest, and warns of much more dire things to come.

Look at the all out attack today on the Lord Jesus Christ today if 10 % of what people say against Christ were said about Allah, it would be an all out war against who ever spoke out against Allah.

If Jesus Christ is not "real" why is there such hatred towards Him and His Holy Name??? Try talking to your fellow counrty men in the same way about the false god Allah and you know what would happen.

Why are they afraid of the truth?

If you are a conservative, or a Christian, or if you care about the stability of our society, you need to know what is in this book. These one star reviews are evidence that there is a concerted effort to silence critics of the gay movement. There is a war raging in our culture, and our courts, and we will lose if we do nothing. I urge you to listen to this book before it is banned!

It's about time a Christian is not afraid to speak up about things going on in society.

Flawed, but occasionally hits the spot.

I don't have a problem with a book which presents a point-of-view, neglecting others. I rate it the same as I would rate a lawyer's presentation of their case. A lawyer need not present both side, but must be truthful with the case they present (i.e, Michael Moore would fail as a lawyer every time), and the lawyer must anticipate what opposing counsel would argue. That is where this book fails. There are too many moments where I can just imagine an opposing lawyer (or critic) would object or even completely undermine the argument. The book also neglects to stay on topic, and eventually reverts to simple preaching. A better, more focused book dealing with many of the same topics is Persecution by David Limbaugh.

well I see a lot of people are saying this book is full of lies, and/or just plain false....but these are the days of the internet, all you have to do is check her facts for yourself and you will find that the author has been accurate, some people hate the book and her because she is conservative, of course you can't believe everything you read,I don't, so read it and decide for yourself.

Okay, first, she uses examples from elsewhere in the world where Christians are actually persecuted (yeah, it actually does happen, though that Swedish priest is still a butthead) and suggests that it is as bad if not worse in America. Because we draw and quarter people who wear little silver crosses over here, so her case makes sense, except we don't and it doesn't.
Second, the examples of "American Anti-Christian Prejudice" are anything but. Taking christian prayer out of taxpayer-funded schools and removing the ten commandments from taxpayer-funded courthouses is not anti Christian. This woman's problem with these rules is that my and your money aren't being spent promoting her beliefs.
Third, in the sample and throughout the book, she cites examples of people who consciously instigate fights by, for instance, taking out an anti-gay newspaper ad, and makes them out to be martyrs who could not have forseen this coming. Honestly, it's amazing she got off her cross long enough to write so many exaggerations and outright lies.
The only thing being "criminalized" here (read: not being publically endorsed by the government) is the kind of severe evangelism that has been imploding in on itself as the public has finally percieved them for the self-righteous all-else-hateful bigots that so many of them are.
Lastly, this is a waste of your money because all these same pathetically weak arguments have been made on dozens of poorly designed webpages all across the internet, accessable for free. So don't bother.

I listened to this more out of curiosity than anything else. The author's theme is preposterous and she provides only unfounded illogical statements.