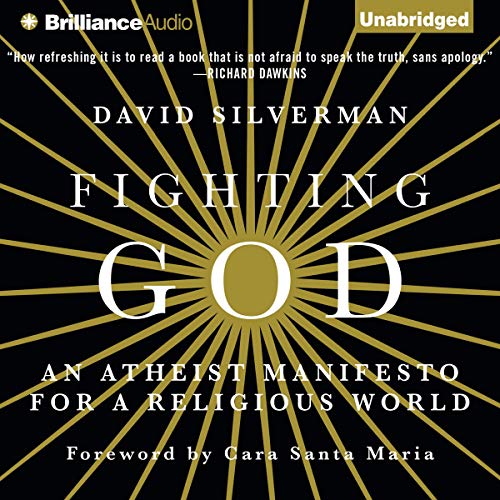 Fighting God is a firebrand manifesto from one of the most recognizable faces of atheism. In his audiobook, Silverman - a walking, talking atheist billboard known for his appearances on Fox News - discusses the effectiveness, ethics, and impact of the in-your-face-atheist who refuses to be silent.

Silverman argues that religion is more than just wrong: it is malevolent and does not deserve our respect. It is our duty to be outspoken and do what we can to bring religion down. Examining the mentality, methods, and issues facing the firebrand atheist, Silverman presents an overwhelming argument for firebrand atheism and reveals:

Fighting God is a provocative, unapologetic audiobook that takes religion to task and will give inspiration to non-believers and serve as the ultimate answer to apologists.

What listeners say about Fighting God

He is not shy

Firebrand atheism.... It's in here. I've been reluctant to call myself an atheist, but this book has changed my mind.

This is a fascinating history of atheist activism in the United States by someone at its forefront.

Although, in my 30 years of atheism, I have never been Silverman's "firebrand" type of atheist ("loud and proud"), never sure that pride is actually a good thing, and never wanting to be the "dick" that Silverman says comes with being a firebrand, I have to say he makes a compelling case for that sort of activism.

It seems clear to me that the promotion and growth of atheism among freethinking people is a great thing for society. I find Silverman's description of the effectiveness of his brand of activism with American Atheists in this regard to be convincing. He backs this up with facts and figures from what sound like more or less scientific studies.
Although, I haven't yet had a chance to check any of those sources. If indeed they can be taken at face value, then I think I love American Atheists.

The Most Addictive Book Ever

Once you start reading this book you would not be able to stop it. It is so amazing in its eloquence and covers the many ways religion is threatening civil society and science. It makes the case that religion is scared of its followers to learn and hear about the truth. Main Idea of the book is to not give up your rights away to religion, to tell people your views about religion, and educate them about their religion.

I listened to the whole book in one day, made me feel inspired and excited about the future of the movement.

I've heard David Silverman speak before and this book is just as inspirational. It makes me feel like I'm part of a community and lit a fire under my butt to fight for atheist rights with my (soon to finish) law degree.

Good read. I agree with most of his views. Everyone should read this. Awesome Atheist.

Silverman lays down the reasons for firebrand atheism.

Concise, well articulated arguments are David's bread and butter. This is one of the best resources in your arsenal against dogmatic thinking. Kudos!!!

Loved this! Awesomely places the demand atheists have for a seat at the table and a right for freedom from religion in society by eloquently stating inarguable examples of the harm religions' unearned "special priveledges" causes not only on non-believers, but society as a whole. Has me fired up to become more of an activist for the cause and I was thrilled to learn here of the 2016 Reason Rally which I plan to attend. Thank you David Siverman for your outspoken, savy, proclaimations that grab the attention of all on our way to equality.

Silverman knocks it out of the park!!!

Anyone who is on the fence just have a listen or read. The man speaks the truth. I urge you if you have any questions or are not sure if you are an atheist or not Dave clears it up real quick. Thank you Mr. Silverman, its a great read/listen.

Well, that was interesting

Growing up a Christian, I was very reluctant of listening to this book. I've heard David Silverman debate well respected evangelicals, and started to have some questions about my own faith. Do I believe all of the stories of the Bible? Should I believe all those stories lest I spend an eternity in hell for my doubt? I look around at all religions of the world and realize, am I full of shot like everyone else? Am I wasting my life looking around with bigoted eyes because I was taught atheists are of Satan, not realizing the damage religion in a nut shell could be hurting the progression of human kind? I would recommend this book to theists and non theists alike. Very insightful, and thought provoking.