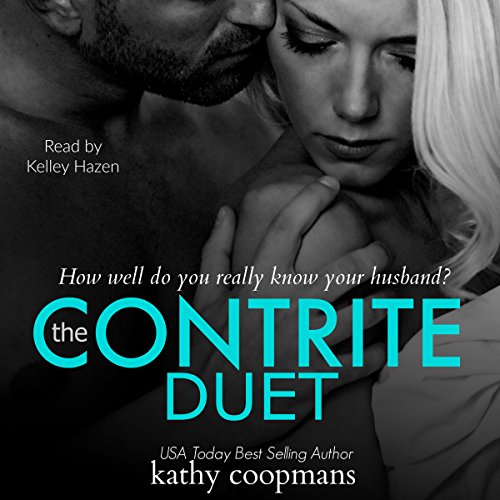 By: Kathy Coopmans
Narrated by: Kelley Hazen
Try for $0.00

What happens when the man you're married to isn't the man you married anymore? This duet includes Contrite and Reprisal, books one and two in the suspenseful Contrite series.

Clove Calloway knows within an hour of picking up her husband, Turner, from the airport that something is different. Yet she can't pin point what. Together since college, they know everything about each other. So why has she spent the last few days watching everything he does, hoping for a clue? What could have happened within that week he was gone?

One way or another, she's going to find out.

When Clove invests in the help of her brother, Zack, a police detective, she's afraid her suspicions of infidelity will be confirmed. Terrified that such news will crush her heart, she sets about preparing for the worst.

Only to find it's much more than she could have imagined - there is no other woman.

Clove's life is about to descend into a web of deceit, lies, and betrayal. Appearances can be deceiving... and only the Master Manipulator will be left standing.

"The eyes only see what the mind is prepared to comprehend." - Henri Bergson

Clove Calloway thought she ended her nightmare life when she stabbed herself.

When the darkness took over, she thought she'd find peace. Seeing her husband die by the hands of his traitorous brother, Trent, destroyed her. Little did she know her dreadful life without Turner is just the beginning. She awakens from one nightmare right into another, confined in a house with the Master Manipulator of them all.

Now, she's fighting for her life instead of trying to end it. As the truth unfolds, layer upon layer of deceit could suffocate her. How many times and in how many way can she be betrayed? But Clove refuses to lose. Just how she's going to win is a plan she's yet to determine....

Zack is determined to find his sister Clove, he knows she is out there somewhere. He can feel it. He wants her home. And he is going to find her! He’s ready to take down the evil that has her in his clutches. Only he's just as shocked as Clove when the truth unfolds....

What listeners say about The Contrite Duet

PHEWEE.. THAT WAS TOUGH GOING

This was a very dark and twisty journey filled with self-doubt, self-loathing and second-guessing as Cove is taken on a horrendous journey where her husband isn’t her husband, where she’ll fight to save him and herself, where she’ll end up powerless yet not alone and where she’ll find out exactly who the evil puppet master is who hatched a wickedly catastrophic plan. This emotional ride won’t make you happy, it’ll truly test your endurance, it’ll have its flaws and it may, like me, make you feel a tiny weeny bit sorry for one of the vile villains. There were some horrible nail-biting scenes and scenes you really won’t be able to imagine a HEA ending will ever come at the end, but hold on to hope because there is one. I can’t say more for fear of giving away spoilers.. but if you are tempted by this harrowing tale (book 1 told from the heroine’s PoV.. then book 2 told from multiple PoV’s), then hold on it’s going to be a chilling, thrilling and very bumpy ride.

Worth a credit? Yes.. but I’ll admit, I didn’t initially like Kelley’s narration much however her voice did grow on me.. and she was really good in book 2 which called for a wide variety of characters and emotions which she did very well. It was a long and arduous story with quite a lot of hot sex.. especially in book 1 and I ended up skimming a lot of those scenes, but it was also full of suspense, angst, drama, violence, obsession.. and a beautiful all forgiving love. Spoiler warning ⚠️ there’s a graphic rape scene.

Where does The Contrite Duet rank among all the audiobooks you’ve listened to so far?

I have only had a hand full of audio books that I have listened to and this is one of the ones that I would recommend that you listen to. thank you Kathy for writing such a great book

I loved that she kept it interesting it wasn't dull she put emotion into it.

okay I am an erotica lover however this would have made a good thriller story without all the sex scenes.
good story line with lots of twists and turns.
I also think it would have been way better with duel narration. the narrator had guys sounding like women and you really had to pay attention to which character was talking when they switched back and forth.
I found myself rolling my eyes during certain scenes where there was no need for a sex scene like who the hell would think a big sex scene when locked in a trunk of a car in fear of their life.... really?
I know this seems like a bad review but Truley its not just venting frustrations lol
can tell you how many times I wanted to just reach in and smack one of them in the head like when you watch a horror film and yell at the tv don't run that way