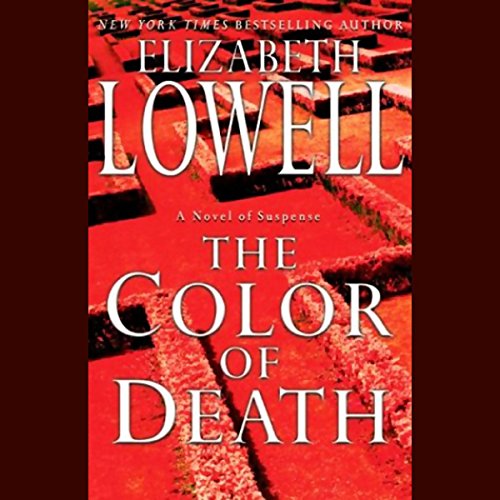 The Color of Death

By: Elizabeth Lowell
Narrated by: Maria Tucci
Try for $0.00

The phenomenal New York Times best-selling author Elizabeth Lowell brilliantly displays her incomparable talents in a story of treachery, greed, conspiracy, and murder that will hold the reader spellbound until the final word.

It is the opportunity of a lifetime for Kate Chandler, the chance to cut seven rare, priceless sapphires and solidify her reputation as a world-class jewel cutter. But something goes tragically wrong during the transfer of goods. The sapphires vanish without a trace. Missing also is the man Kate trusted to transport the gems, her half-brother Lee, who now quite possibly is dead. Suddenly, she is on the run, pursued by federal agents who suspect her of being the criminal mastermind of a cunning bait-and-switch scheme.

Special Agent Sam Groves, an essential member of the FBI's elite strike force, could never be scammed by a beautiful confidence woman. But something is troubling about this assignment: someone else is chasing Kate Chandler as well.

Kate suspects the awful truth: she has stumbled into a conspiracy that goes far beyond a simple jewel heist. Getting Groves, her constant shadow, to believe her is a step in the right direction, because the order has already been passed down to a ruthlessly efficient assassin: Kate Chandler must not be allowed to live.

"Lowell deftly explores the underworld of the gem trade, treating readers to a nail-biting search for killers with an eye for glitter." (Booklist)

What listeners say about The Color of Death

The Story was Better Than Reader

I am coming to realize that for audio books, even a great story can be undermined. Looking back on it, The Color of Death has a good story. Conflict, an interesting world of precious gems, love and violence. What made this book less satisfying was the inability of the reader to provide distinct characterizations to even the main protagonists. During dialogue I sometimes lost track if it was the man or the woman that was speaking, and I'm not sure the reader knew either. The main character is a woman, and there is one other woman in the book, while ALL the other characters (and there are a lot of them) are male. I'm not sure why the producer chose to use a female reader in this case; she had a lot difficulting coming up with multiple male voices.

I enjoyed this book and the added interest of gems and jewelry. The reader was okay but the scratchy voice used could be a little off-putting. It kept my interest and moved at a good pace with some good twists and turns thrown in. Once in a while the plot seemed so obvious to me that you wanted to yell at the characters to think logically, but that means I was involved in the book so that is a good thing. Would read another by this author given the opportunity.

The story is lightweight and has too much padding. I found myself losing interest while listening