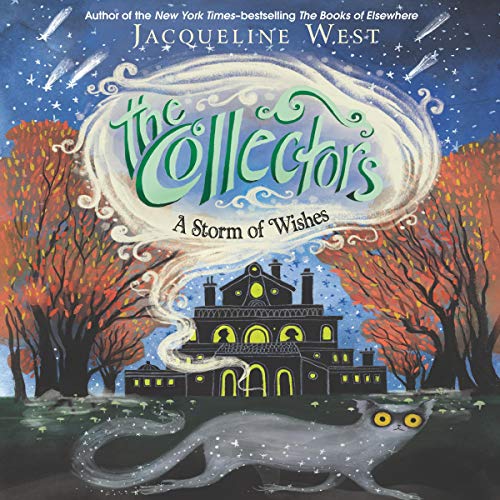 The Collectors #2: A Storm of Wishes

By: Jacqueline West
Narrated by: Ramon de Ocampo
Try for $0.00

Discover a secret society where wishes are stolen, and dreams have a price.

In the spellbinding sequel to New York Times best-selling author Jacqueline West's The Collectors, 11-year-old Van Markson embarks on a quest full of magic and adventure to rescue his best friend from a dangerous wish collector.

This contemporary fantasy is just right for fans of Trenton Lee Stewart’s The Secret Keepers and Jonathan Auxier’s The Night Gardener.

It’s been only a few weeks since Van uncovered a magical secret - that wishes really can come true, and that a mysterious society called the Collectors protects us from the dire consequences even the smallest wish can have. Van knows only too well how wishing can go awry: His mother is recovering from a broken leg, his friend Pebble has been stolen away by the evil wish collector Mr. Falborg, dozens of dangerous creatures called Wish Eaters have escaped into the world, and Van himself has almost died - twice - all because of wishes.

When Van's mother is offered a position at the renowned Fox Den Opera, located in the quiet, beautiful forest a few hours north of the city, she whisks Van away with her, hoping this will be a safer home for their family of two. But Fox Den is home to an ancient Wish Eater - a powerful creature with the ability to grant wishes that have catastrophic consequences; a Wish Eater Mr. Falborg would love to get his hands on. Van must team up with the Collectors and find a way to stop him before he makes a wish that leaves the world in chaos.

New York Times best-selling author Jacqueline West takes listeners on an adventure with magic woven throughout every minute. Fans of Cassie Beasley's Circus Mirandus and Robert Beatty's Serafina and the Black Cloak will love the thrilling conclusion to the magical journey begun in The Collectors.

What listeners say about The Collectors #2: A Storm of Wishes

Loved it! Just as good as the first one!

My 9 and 7 year old loved it! Nicely wrapped up. Wish should would write another one though!