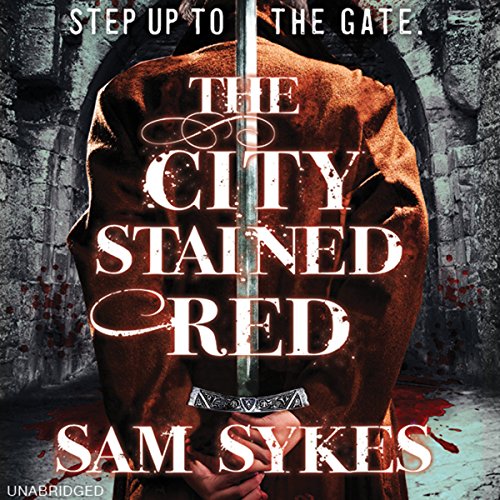 By: Sam Sykes
Narrated by: David DeSantos
Try for $0.00

Step up to the gates.

After years in the wilds, Lenk and his companions have come to the city that serves as the world's beating heart. The great charnel house where men die surer than any wilderness. They've come to claim payment for creatures slain, blood spilled at the behest of a powerful holy man. And Lenk has come to lay down his sword for good. But this is no place to escape demons.

What listeners say about The City Stained Red

The City Stained Red is a fantasy novel, but only in an aesthetic sense. Sure, there's magic, monsters, demons, and swordfights, but the author has chosen to subvert standard fantasy storytelling tropes like heavy exposition, heroic protagonists, or even a clear division between good and evil. These subversions all feed perfectly into the central theme of the novel: chaos. The world of The City Stained Red is dirty, disorderly, and cruel; and the protagonists (I hesitate to call them “the good guys”) are not here to fix it.

The story opens in medias res (kind of), so instead of learning about the protagonists via exposition, their characters are revealed through their actions and interaction with each other and the world. Each has a unique way of coping with the immense chaos of the setting, so any reader will be able to identify well with at least one of them: whether the reader would just want to leave the chaos behind, try to find personal connection in the chaos, try to help others in the chaos, be at home in the chaos, look down on the chaos through a lens of simple axiomatic truths, or try to control the chaos by (literally) burning it all down.

The structure of the story eschews standard fantasy arcs like redemption or ordained quests, instead choosing to follow this scenario to fruition: what if six uniquely powerful people with various levels of decision-making skills entered a city like Jerusalem at the peak of Roman occupation? “Powder keg” is an understatement. The protagonists are broken people in a broken world, so of course their stories can come across as dirty and disjointed. One character is revealed to be a terrible (almost vile) human being, but instead of being given a chance for redemption, his arc completes when he realizes and accepts that he is a monster.

I do not want to leave the impression that this book is overall dower or dreary; it is actually a very fun read. The author often portrays the most chaotic moments as whacky hijinks; the dialogue and descriptions are freckled with wit and hilarious analogies. David DeSantos’ performance is fantastic: despite the large number of main characters, he is able to make each voice instantly recognizable and characteristically appropriate. Bravo! I sincerely hope that Audible commissions his performance for the other novels in this series.

I'm not wild about it.

First thing's first: Sam Sykes is a great writer. The prose, the dialogue, and the characters in this book are all great; there's nothing to complain about there. The issue I have with this book is purely with regards to the story. There was never a moment, a definitive scene that grabbed me and held me wanting more. This story feels like someone took a unique D&D world with mostly unique races and a party of well developed characters and just plopped the reader into the middle of a campaign without much to capture the reader's attention. The context is thin and Sam assumes that there's enough of it to keep you going until finally something interesting happens. When the end finally came I needed to think "what actually happened in that book?"

Now for the good stuff. The characters are compelling, interesting, complex, and fun. The world is diverse and well built. The writing is caddy and cynical, in a good way. There's so much depth that this is what kept me going aside from the fact that I have a penchant for finishing what I start no matter what. The ending scratches the surface of the story that's actually being told. This book is not good as a stand alone story in my opinion, but will hopefully serve as a springboard for a truly epic tale.

I genuinely enjoy following Sam Sykes on twitter but I do NOT recommend this audiobook. As much as I'm impressed by DeSantos' range, his deep voice was hard for me to listen to for long periods and his delivery of jokes didnt do it for me (and there are a lot of jokes). The cartoony voices he gave some characters honestly ruined the story for me.... I may even buy the hard copy just to see if the voice Id put on these characters changes my opinions of them.

As for the story itself, it had a very lighthearted, humorous tone overall which unfortunately doesn't click with me in a fantasy setting, as funny as I think Sam is. It often came across juvenile. I would recommend this to anyone who would like to read a silly fantasy story with a lot of characters and interesting species... just read it instead of listening to it here.

This one didn't do it for me. I agree with the other reviewer called Chelsea who said it was juvenile. Every line was another attempt at wittiness, totally at the expense of a plot. Was there a plot? There certainly wasn't a protagonist. Just a group of tropes jaunting around telling jokes. Or worse--the author telling jokes and using the characters as props. There is zero depth or interest to these characters beyond cookie cutter stereotypes.

There are also vast numbers of original races, none of which I really had any interest in and which I felt cluttered up the world. This may just be me, because I honestly prefer my fantasy human-based, with at most a dwarf or an elf thrown in here and there. While a non-human race or two *may* add depth in some situations, to me, a half dozen or more is total overkill. This world is the fantasy equivalent of Deep Space Nine.

Given the title and synopsis I thought this book would be dark, but it definitely isn't. There are grim themes such as killing, sure, but they are wrapped up in so many jokes that the mood is the opposite of grim. The main mood seems to aspire to be humor, but if the author's style of one-liner comedy falls flat with you (as it did with me), then there really isn't much left. It's just random, unsatisfying events.

Okay, in total fairness, I did get a few laughs out of the giant guy from the sample. That's not nearly enough though. Learn from my mistake and save yourself the credit.

An awesome first book in a series, I wish there were more audiobooks from Sykes!

Narrator does a great job of presenting Sykes unique witty writing in a way that flows very well.

This series takes some fantasy tropes and turns them up on their head - a great thing for a genre that can become saturated with predictability.

Moments of laughter, confusion (the good kind), action, and sadness all happen organically, leaving you wanting more. definitely worth a listen.

superb start to a fantasy series

i enjoy the more modern style of characters as they interact and speak with each other. This isn't Tolkien. This is Mickey Spillane playing Dungeons and Dragons.

not my cup of tea

So the fantasy book has a lot of humor but I just could not follow the plot.

picked this up after a panel where sykes talks about the characters being the most important thing to a story, not magic systems, the setting, etc.
unfortunately, didn't see any of that. aside from a bunch of great one-liners, all six of the main characters were entirely unlikable, one-dimensional tropes; for instance, the main hero spends most of his time moping about how much he hates killing, though any instance of it is glossed over. there's almost enough change in the group as a whole to equal a single character's growth in another story.
the story was uninspired, with plot hooks ignored in favor of angst and monologue.
will not be seeing what happens in the next book.

Such a good narrative.

This books is a wonderful romp through a high fantasy setting that follows a diverse group of adventurers with different individual goals. It's a wonderful story with heartwarming characters and lovely philosophical topics best discussed in fantasy settings, imo.

If you enjoy The King Killer Chronicles then you'll love anything by Sam Sykes.

I want to hear the next story

This is solidly written an performed. I'm completely invested in the characters. There are definitely some questions that I can't wait to have answered!