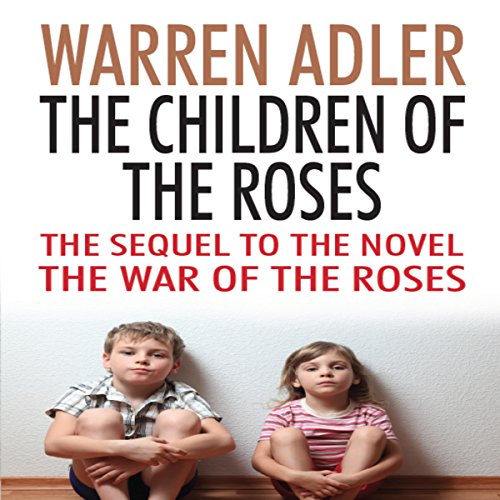 The Children of the Roses

By: Warren Adler
Narrated by: Dominic Lopez
Try for $0.00

Warren Adler's The War of the Roses leaped into the public consciousness and has since remained an essential thread in a wider tapestry of divorce iconography. Now Adler presents us with the chandelier-shattering legacy of Barbara and Jonathan Rose relived in their children, Josh and Evie, in a hilarious sequel to the original iconic tale about the perils of marriage, divorce, and the destructive power of materialism.

Unlike the legendary Roses, Josh's marriage to Victoria should have all the qualities of an everlasting union. But when an innocent caper involving missing Milky Ways catapults out of control at their son's elite private school, they find themselves entering into a shattering warfare of a different kind. Armed with the emotional mayhem inherited from their parents as well as compounded pressures involving a depraved headmaster, clandestine affairs, and Victoria's male-hating mother, The Children of the Roses presents a gripping story of the lengths to which parents will go to protect their children.

Little more than a child herself, Josh's ever-sympathetic and overstuffed sister, Evie, lavishes her "food is love" obsession on her beloved niece and nephew, who are coping with their own sense of loss. Meanwhile, Michael and Emily, soon-to-be children of divorce, orchestrate their own plan to keep their family together at all costs.

Adler once again demonstrates his storytelling mastery by revealing the intricate blending of the past with the present and how time unravels all seemingly perfect things to be darkly and even comically dysfunctional.

What listeners say about The Children of the Roses

Good wrap up to the books

I find these characters even more engaging than their Parents in the first book. War of the Roses wasn't necessarily a book that left me wondering how Josh and Eveie turned out so I was surprised I really liked this one more than the first. The narrator wasn't my favorite at first but he transitions into the other characters flawlessly and except for one accent that reminded me of George Takei's affected "Oh My!" voice I was very engaged with his voice acting to the point I nearly missed some editing snafus where he can be heard starting a sentence over again. I can't even complain because I was too happy to find this story on Audiable! It's a shorter book but worth it if you're ok with few surprises but interesting turn of events and characters. It's become one of my longer list of favorites.

I would recommend it with the disclaimer "the war of the roses was one of a kind, don't expect the same tension in this book".

I was very creeped out by the children. I can see a possible third book. i would like to know how the kids grow up and what they get up to.

didn't really like the narrator. perhaps a female voice would have been more engaging.

if it was on netflix.

The Children of the Roses

I haven't read "War of the Roses." This is supposed to be the children from that book, after their grown. The family is perfectly dysfunctional, thank you very much. Each side has their own issues and blame the other, all the while claiming they don't want to effect the kids.The kids seem pretty normal or are they? Keeps you guessing how it will spint out. A bit of dark humor too.