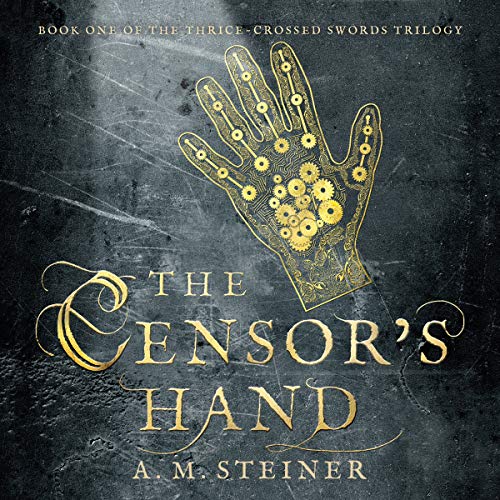 Book One of the Thrice-Crossed Swords Trilogy
By: A. M. Steiner
Narrated by: Michael Troughton
Length: 14 hrs and 10 mins
Categories: Science Fiction & Fantasy, Fantasy
4.5 out of 5 stars 4.4 (15 ratings)

By: A. M. Steiner
Narrated by: Michael Troughton
Free with a 30-day trial

Magic has transformed the Unity, but at what cost?

Miranda, one of the 100 adopted daughters of the Dowager Duchess, wants nothing more than to become a master of the cunning arts. Only a fool would doubt her genius, but never before has a woman been permitted to wield such power.

Jonathan faces ruin. The sails of his mill haven't turned since the Company of Cunning diverted the winds of Bromwich to their advantage. He's always been a devout and law-abiding man. How far will he go to protect his family from destitution and the gangsters at his doorstep?

If Daniel, his brother, passes the tests to become a censor, maybe he could protect them. He might even get the chance to make amends for what happened to their sister. But in the real world, justice is elusive, and the damage of the past can rarely be undone.

A fantasy thriller for the adult listener, The Censor's Hand presents a dark and intricate vision of a world transformed by magic.

"I recommend this book." (Ventureadlaxre, Australia)

"A uniquely crafted world of fantasy and magic." (The Joycean Booknerdery, Netherlands)

"Masterfully crafted...I'm hanging on the edge of my seat to read the next installment. By the end of The Censor's Hand, you will be too." (Reader Nature, USA)

"I really like this book." (The Weatherwax report, USA)

What listeners say about The Censor's Hand

There are parts of the book and others not so much. I don't know what it is but I found that this is not really for me. I usually like this type of book but it did not capture my attention as much as I would have liked.
Others might like it more then I did.

Wow!What a story!Many ups and downs.Likable characters. Michael Troughton was an awesome narrator.I was given this book by the narrator,author or publisher free for an honest review.

Not bad, but not great either

Was an OK listen. Not exactly what I generally like, but was still decent.

Daniel is at the end of five years training to be a Censor. He’s ready to start his career doling out justice. Miranda is ward of the Duchess of the North and has ability to use Cunning to control magic that gives her an opportunity no woman before her has had. John is Daniel’s brother who just wants to keep the family mill going. They all get wrapped up in a murder mystery that proves big enough to change their world.

I’ve read a lot of books lately, really! Just check out my reviews at Science Fantasy Hub if you don’t believe me. Anyhow, I know The Censor’s Hand is one of those that is such a vivid world, you’ll fall back into recollections of certain scenes from time to time. Especially when real life is boring. Like being stuck on traffic on the stupid bridge. You’d think paying fifteen dollars to get over a river would be a quick thing…

This book made a twilight trip over the George Washington Bridge into Jersey worthwhile! I was given this free review copy audiobook at my request and have voluntarily left this review. I’m going to use one of wifey’s monthly Audible credits for the other two books in the series, when she lets me.

I really liked all the freaky guys that practice Cunning with the Honorable Company. Their strategy is to appear “other-worldy” so that magic is attracted to them. A couple characters are very memorable. I don’t want to spoil, so you should just start reading for yourself.

I loved it! Give me the next book!

So I really loved this! I had a hard time getting started with it. It was a little confusing at first. But after a few chapters I got my bearings and was able to enjoy the story. I found the story very entertaining. I think this was very well written. The characters were well developed. I think there were time when I wasn't sure what was happening. lol But other than that I was invested! I would recommend this book. I'm wondering where the 2nd book is and how I can get a hold of it! I'm definitely a fan of the series now.

this start gives me a lot of hope for the future. This is a more serious fantasy novel. It was great and i can't wait for the sequel.

In this book I have found an author whose writing style and would building balance and complement each other. You feel as though the people and situations they find themselves in could realistically take place (given the magic system). The characters internal struggles are well captured. The background details and richness of the vocabulary employed are impressive. I can only hope that the author can continue supplying this level of engagement without too long a gap between books.

Not boring, but not interesting

Nothing about this book really captured my attention. The characters were boring, the plot was boring, and even the fights were boring. I had to reread several sections cause I caught myself zoning out.

This is the first book I have listen to by A.M. Steiner and I really enjoyed it. Steiner delivers a story that is different than most good vs bad and he keeps it very interesting. I enjoyed the action and seeing how the all of the main characters deal with the challenges and struggles they have to deal with. Michael Troughton does an excellent job in telling the story and keeping you interested.

The Censor's Hand is an excellent book. The setting is a rich and vibrant world where science, magic, political intrigue, rebellion, and ideologies clash and intertwine flawlessly .While I initially had a difficult time getting into it, it keeps getting better and better. I will absolutely be reading the next book in the series

Stats
Plot- Three characters with separate yet interwoven lives and drastically different goals, all directed by unseen hands as a culture heads towards war and disaster. All of these factors serve to produce one of the most intriguing and well-crafted plots I have seen. (5 stars)
Characters - The characters are impelling and complex and truly draw you into the story. (5 stars)
Storytelling - The author's talent is undeniable, while I at first thought the story to be slow I quickly came to enjoy Steiner’s eloquence. Moreover, by the time the book ended I was excited to read more. (5 stars)
World Building - The Censor's Hand is set in a rich industrial world ripe with clockwork and seeped in magic. However, world building is not the author’s primary concern, which does leave room for the world to expand in future books (4 stars)
Magic System- Magic in this world is clearly complex and will likely continue to play a large role it the story, yet it remains, likely purposely, undefined and abstract. (4 stars)
I received a free copy of this book in exchange for an honest review.

Morality rating- The Censor's Hand contains some language, violence, and sexuality as well as, an off-screen sex scene and the causal discussion of torture, sex, and homosexuality.

I saw this book mentioned in a Grimdark literature forum and thought I'd give it a go. Ever the optimist, I expected it to be pretty good, but not nearly as good as it turned out to be.

A lot of this genre is in love with its atmosphere and worldbuilding at the expense of plot and character. Not so here. Don't get me wrong; the worldbuilding is intriguing, thorough, believable and features some brilliant unique ideas. The plot and characters, however, are next level here. I am totally in love with Miranda (naturally), and throughout the author has that knack of writing 'in character' so that we see the world how the character would, we care about the things they'd care about, notice what they'd notice. Each plotline has a goal worth attaining, has some stakes and sense of risk, and there is plenty of properly-rationed mystery and genuine shocks.

For me, the writing style and general tone sets the book even higher above the usual fare. There are some masterful descriptions, and the sentences are elegant; there are features that remind me of Mervyn Peake, if he could write an engaging plot as well as a breathtaking paragraph. The research details (the workings of a mill, for example) and word choices totally serve the feel of the book and its world, and the complementary genre elements—a bit of fantasy, a bit of steampunk, a bit of classic mystery—are woven together with deft mastery.

Any criticisms I have are from a desire for more; I wanted Miranda's trajectory to be more drawn out, and reveal more of the workings of the Convergence. It's a testament to the depth and intricacy of the world-building that I felt there were some missed opportunities that could have been taken without my losing interest in the plot. To be fair, though, it might have interfered with the timelines of the various plots, which were able to join up satisfyingly because of a bit of abbreviation. It's rare I'd ask for 'more padding', but this is an instance where I could have listened to at least another four hours of Convergence business. Some might want more action, but in this case I think they'd be wrong, and I appreciate how each action scene has its own feel and new features, so that there's none of that 'here we go again...' feeling that makes me want to skip pages in some other books.

The conception of magic is one of the best features for me. Too often it's treated in Fantasy like something to be mastered like any worldy pursuit; like science, particularly. The whole point of Steiner's magic is that it is otherworldly—even 'interwordly', as shown in one absolutely golden episode—and harnessing it is not a comfortable matter of 'working really hard' or 'having talent'.

The narrator was good, with crisp delivery, a compelling cadence that took notice of rises and falls in the tempo of the plot, and a warm, pleasant voice. Good expression with character dialogue, which added to the immersion. Impressive accent work, although one, though technically pretty much there, wasn't at the level where characterisation could be as subtle as managed with other voices. SFX not to my taste, but sparingly used and so not an issue.

I'm eager for the next books in the series, and would be happy if the same narrator read it. The audio medium definitely adds something over text.