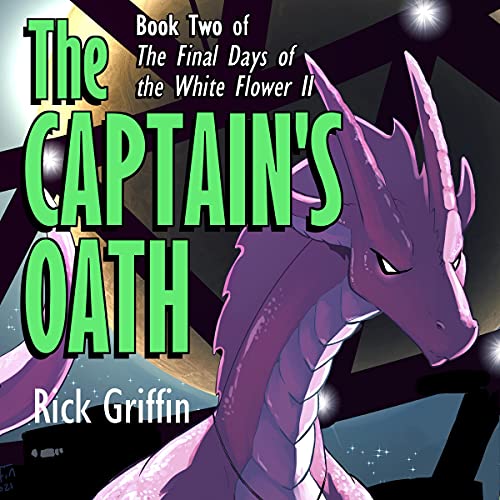 By: Rick Griffin
Narrated by: Piers Ryman
Try for $0.00

The best-laid plans of geroo and ringel often go awry. Nobody knows that as well as the crew of the White Flower II, the geroo ship whose captain still bears the literal scars of his last failure. Despite their best efforts, his ship and its crew still languish in slavery to the cruel krakun. But when a new opportunity for freedom presents itself, will the geroo be able to pull off an even more daring escape plan - right under the nose of a krakun overseer? The Captain's Oath is the second installment of The Final Days of the White Flower II Trilogy by multi-award-winning artist and writer, Rick Griffin. This science fiction epic continues the exciting story of struggle against oppression that began in Traitors, Thieves, and Liars.

What listeners say about The Captain's Oath

This was an outstanding story and literally the best I've ever enjoyed. The heroes are endearing, the villains are detestable, and even the minor characters are enjoyable. The action is thrilling, the suspense gripping, and the delivery was wonderful. I don't know what more I could possibly ask for in an adventure.

An Astounding Sequel to the Trilogy

"This reader was provided a copy free of charge and has left this review voluntarily."

The Captain's Oath put me on the edge and wanting more. What I like most about this series is the evolvement and development of the characters and storyline. It's a connection you can feel. In a lot of books I've read or listened to, author's have a tendency to drag out scenes and situations which Rick Griffin doesn't do at all. I'm hoping Piers Ryman narrates the third. I'm eagerly waiting for the third installment of the series :)

a great sequel to book 1 in the series. Piers Ryman delivered another great reading of the story and I am going he will be reading book 3 when that is finally released.

if you are into space stuff and furries this is the book for you.

A fantastic adventure with plenty of heart, this second book is even more gripping than the first. Heartwarming characters who struggle in their quest to be free make this series a joy to listen to! I can't wait for book 3!

Wonderful sequel in a great sci-fi

Fantastic sci-fi both familiar and alien in great balance. I love how the characters have proper facets and flaws that play into who they are in the best ways. I look forward the next one with open excitement!

Another Great Book for Space Opera and Furry Fans

The story me at the edge of my seat through out the whole book. All of the characters were interesting, and sometimes even relatable. The narrator did another great job with their performance. I'm looking forward to what will happen next for the crew of the White Flower II.

This book focuses on completely different characters than the first story and makes their whole world, ship, and the species involved even more three-dimensional by doing so. This is another excellent book and I feel so privileged to have discovered Rick Griffin's writing.
Piers Ryman has, once again, done a fantastic job of narration.
Bravo!

A Rollercoaster of suspense.

I had a most sinking feeling multiple times in those book alone. Can't wait for book 3!

This was such an incredibly engaging story

I loved this book, as well as it's first book in the series. the voice acting was easy to follow, the story had sciency tidbits that kept my interest and I was hooked even though I already had read the book.

Thank you for such an amazing performance.