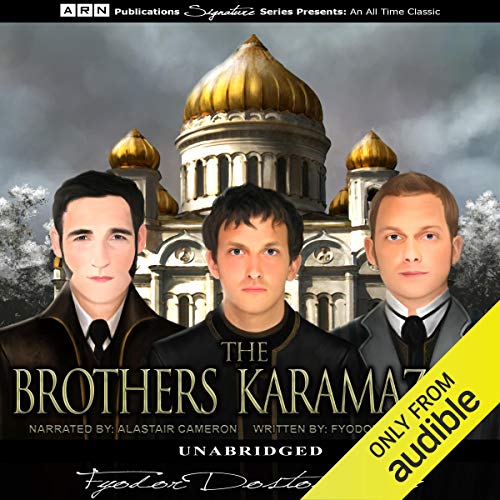 The Brothers Karamazov is a tale of a complicated and broken family headed by a father, Fyodor Karamazov, who becomes entangled with his three sons, whom he neglected, after both mothers died.

Dmitri, the eldest brother, has returned home, in search of his father who has in his possession the inheritance that Dmitri's mother left to him. The men quarrel over who should receive the money and the resentment deepens when the two men learn that they are both in love with the same woman, Grushenka.

Ivan, a superior intellectual, and Alyosha, an apprentice at a monastery, are the half-brothers of Dmitri and both try to help solve the quarrels between Dmitri and Fyodor. None of the men know each other really well, except for Ivan and Alyosha shared the same mother.

When it is discovered there is a fourth brother, Smerdyakov, who has been raised as a servant, more secrets start to emerge, and when Fyodor is murdered, one of the brothers is immediately given the blame. The Brothers Karamazov explores many different philosophical ideologies about family and religion and tests the strength of familial bonds, even those that are newly forged.

What listeners say about The Brothers Karamazov

A Great Voice for a Great Book

Fyodor Dostoyevsky’s The Brothers Karamazov explores different ideologies surrounding the notion of family and religion, testing the strength of these familial bonds. His beautifully crafted stories often engulf the reader with his distinct characters regardless of which novel you're reading. Dostoyevsky is known for his ability to craft characters and stories that explore the very idea of being human, and The Brothers Karamazov definitely achieves this.

Having read this book more than once in the past, I can say that reading through any translated work can be slightly awkward for readers, but Alastair Cameron does a spectacular job helping to distinguish and give identities to each of the characters through his narration style, making it an easier read to listen to than to actually read it. His warm tone makes it a delight to listen to and follow along without getting confused. Anyone who’s read other works of Dostoyevsky and knows of his ability to create brilliantly complex stories, will definitely appreciate The Brothers Karamazov as well.

Masterful reading of a great work

The genius of Dostoevsky is on full display in this novel.

The BK is a masterful story, plumbing the depths of human psychology long before Freud started writing about psychology. This book was loved and admired by Einstein, Wittgenstein, Freud, Leo Tolstoy, and Pope Benedict XVI, among others. It is a survey of both the human soul and the Russian soul; and the subtlety with which the human spirit is examined is dizzingly complex. It draws heavily on the insights of 1800 years of Orthodox Christian spirituality, and is a profoundly Christian novel, similar in spirit to Victor Hugo’s Les Miserables.

The demands on the (oral) reader are tremendous, and at first, I wasn’t sure I cared for the narrator’s voicing. But as the story went on, I came to feel that Alastair Cameron did a wonderful job, because the book consists of many strong characters, in constant dialogue, and his reading did a great deal to keep the characters clear for the listener. Readers and listeners owe Cameron, and the translator, Constance Garnett, a great debt of gratitude.

Dostoyevsky is one of the best of all time!

Even though this book is over thirty hours long it's certainly a great one to listen to. Dostoyevsky is one of the greatest writers of his time and his works have certainly earned the reputation of great classics. His own life and experiences heavily influenced his writings with some characters overlapping real events within his own life. Alastair Cameron does a wonderful job in this narration with a magnificent pace, adding drama and emotion where needed, and with crisp and clear articulation.

A great classical piece that's a must have for any collection!

This is an absolute masterpiece of literature and, to my mind, the greatest literary achievement. The performance is excellent as well, with Alastair Cameron differentiating characters very well in what can be a confusing mix of names and people. As I’ve said, this is a masterpiece in the fullest and truest sense of the term.

it took me 2 months to finish this long classic. However, it was worth it. It is a reminder that while circumstances and cultures are different, the human condition is similar across time and space.

It is impossible to listen to this book, the reading is awful. I gave up after an hour and will search for a new edition.

I got this Audible book because it was the same translator I had for the book, to which I read along. I heartily recommend this reading process, because the narration moves your eyes along and you use another sense to understand and appreciate the book. This comes from an English teacher of 34 years experience, seventh grade through graduate school.
The problem is the narrator. His sing-song voice does not give the book the gravity it deserves in parts. Worse yet, his pronunciation of French words and phrases is atrocious. This becomes a factor because Tsarist Russian nobility spoke much French: i.e. he pronounces "c'est" as "sest". Mon Dieu!

I can’t listen to this. After a few minutes my nerves are on edge, the reading is so choppy... reminds me of a record with a scratch. Horrible rhythm in the reading.

A good, if dry, reading of a classic

I'd been meaning to read from authors like Dostoyevsky, but such texts are quite intimidating when you lack enough free time to maintain a hold of the narrative. After taking a brief job as a truck driver, I figured it was a good time to try Audible and use it for such texts. I'm grateful that I did, otherwise I'd be still somewhat ignorant of this amazing story.

Dostoyevsky does a great job of portraying a gambit of perspectives, from the pious monk to the learned man of science. The various Karamazovs all had familiar perspectives and responses that I might have had at various points in my life. Certainly, the plot of the book gave plenty of opportunity for these Karamazovs to show their depth.

The narrator did well enough, annunciating clearly and somewhat mirroring the tone of the passage. The issue is, of course, that such a long book can make it feel dry without multiple distinct voices. Still, I got what I wanted out of the experience.

The Brothers Karamazov is the final novel of Fyodor Dostoyevsky. It is a very lengthy and sometimes complicated philosophical novel. As an audiobook it is sometimes difficult to follow. I often had to refer to an actual hard copy of the book to capture and comprehend details of the novel. Having purchased the least expensive audiobook I could find, if I had it to do over again, I would carefully select a narrator that I enjoy listening to, even if I had to spend more for the product. There are many to choose from and it is a LONG listening experience. I am very glad I read this book, but it required endurance. Thank You...

terrible narration, cannot listen to it

i did not think that every line ended with an exclamation mark, but it does with this narration.

unable to listen to it, absolutely horrible