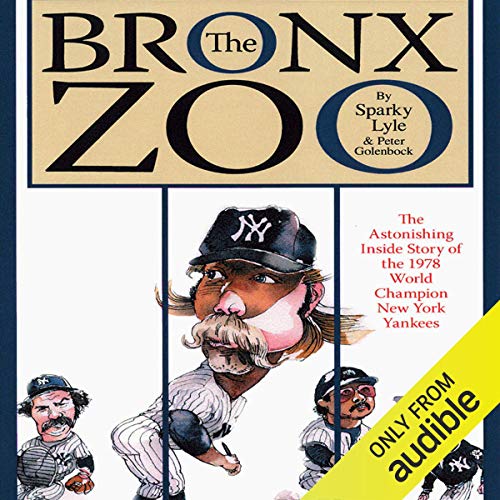 This best-selling, highly-acclaimed account is a hilarious but scathing baseball tell-all. After being voted the 1977 American League Cy Young Award winner, Sparky Lyle was rewarded for his efforts by being benched. The Yankees, a leader of free agency, signed Goose Gossage as their closer. Things only went downhill from there and the 1978 season turned out to be one of controversy, firings, fights, and acrimony. In short, it was a zoo.

What listeners say about The Bronx Zoo

This Should Be Your Next Listen

I have had an audible membership for years now and I love sports. I have listened to so many of the baseball books audible has and this is as good as any I have listened to and better than many. It is interesting throughout, not just a guy speeding through names and statistics so fast you feel like you are always missing something. This book has heart, Lyle narrates this story to perfection. He expresses emotion well, and you can begin to imagine what that year with the most storied franchise in professional sports was like.

Sparky's book on the Yankees 1978 season is a forgotten classic. Like Ball Four, Bronx Zoo is funny and insightful about struggling as a major league baseball player. The main difference is the Sparky is one of the gang so his comments aren't from the snarky outsider that overpowered Bouton's book. This is a star on a world championship team with appreciation for most of his teammates.

The first plus is that Lyle is observant and understands the game. He appreciates key players Munson, Chambliss, and Randolph. He tolerates quirky guys like Rivers who he understands are essential to the team. But he doesn't mind pointing out the foibles of Reggie Jackson. He gladly does so. But he is not above praising Jackson when he starts to hit. He just wishes Jackson could learn to talk less. What he likes about Billy Martin is that Billy treats his players like men. By the end of the season with Martin gone in favor of Bob Lemon, Sparky says that Billy is the reason the team can win, although he's not knocking Lemon. He likes Lemon. And he doesn't always like Martin, but he understands enough about baseball to put aside his irritations to evaluate the situation.

While it's a known fact that Sparky Lyle taught Ron Guidry the slider that turned Guidry into a Cy Young winner in 1978, Lyle downplays his involvement saying he may have given some instructions, but all pitchers really have to learn it on their own. He is proud of Guidry early in the season and then in awe of him. He reports two of Graig Nettles classic comments, about being a kid and wanting to join the circus and play professional baseball, and getting to do both with the Yankees. Of the Sparky Lyle situation he says that Lyle went from Cy Young to Sayonara. He is full of praise for Nettles as a hitter and third baseman. He recounts a game where Nettles says he is going to hit the ball over a sign a fan puts up in right field. He does so. Then he hits a homer later in the season and tells Paul Blair he will hit another one in the game and does that also.

Bucky Dent missed something like 40 games during the season and he was often pinch hit for. But with Randolph down Bucky was the guy hitting with 2 on in the 7th inning of the playoff game against Boston. The first pitch is a slider that Dent fouls off his foot. Dent hobbles around and tells the third base coach if Boston pitcher Mike Torrez throws that again he is putting it in the net. Torrez does and then Dent does. The Yankees win that game and then the World Series, which is just an epilogue in the book.

The tone of the book is that of an irritated and funny veteran who had the time to think about the game because he wasn't playing enough. The narration on audible is done by Sparky himself and he is great at it. I wish he had written a book for every year he spent in the majors.

I gave a book report on this in the 10th grade and the kids in class laughed quite a bit. A few even came up afterwards to offer praise. I thought I was so funny. And now reading it again I can see how easy it would have been to describe Lyle's practical jokes and bring the house down. The book is that well done.

I love this book but it is because the 1978 Yankees are one of my all time favorite teams. This book was also one of the first long and adult books I read as a kid so revisiting it beings a lot of good memories. Love the book and the story but again there is a tremendous amount of good vibe bias in this review.

Good book. Was so controversial when it came out. Now looking back. It was just a fun book. Sparky reading it made it better. He would laugh telling funny stories. I remember that season like yesterday. I was 10 yrs old and thought those players were gods.

A classic baseball story about one of the greatest comebacks ever. Lyle from cy young also ran

A worthy successor to Ball Four

The truly astonishing story of the ‘78 World Champs capably told by Sparky Lyle. I liked Ball Four better, but Lyle is a fine storyteller. And by midway through the book, Lyle warms up to reading it aloud and chuckles a few times at the some of the stories. Recommend.

Unique but a great listen

I liked the format of this book which was pretty much in a journal format. Since I was born in '93 I obviously never got to see this team play but I knew about them since my father would always talk about the players in this book and I'd occasionally see whitewashed documentaries about this team. Getting a true insight of this team and the day to day life of a baseball player made it a fun listen for me. The candid approach of this book is what ultimately made this book so great since a journal format gives you insight into one's life a LOT more than an autobiography.

I enjoyed this listen but it required limits. in parts it was so negative I couldn't listen too long or close to bedtime. Some content a bit jarring from a 2020 perspective. the secret to this listen is to but not take it too seriously. Lyle is a real character but amazingly among the sanest in the book. His observations are quite good about baseball and in a twisted way about people. I was a little disappointed that his entries did not continue into the postseason. PS I have decided NOT to recommend this book to young developing men I know even if they are Yankee fans due to the misguided misogyny

A fun review of the Bronx Zoo

Sparky makes you feel as though he talking to you. Insightful & funny. A c⚾️⚾️l respective to the 1978 season.