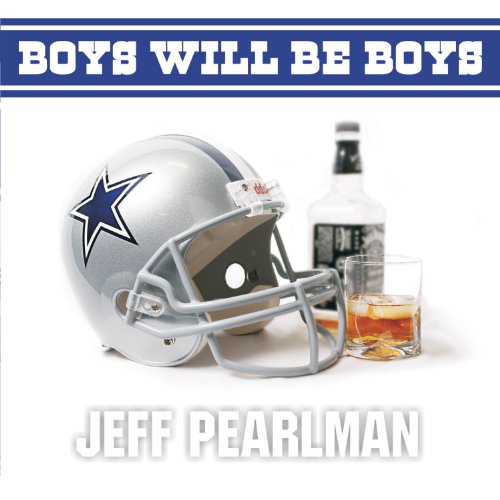 Boys Will Be Boys

By: Jeff Pearlman
Narrated by: Arthur Morey
Try for $0.00

They were America's Team - the high-priced, high-glamour, high-flying Dallas Cowboys of the 1990s, who won three Super Bowls and made as many headlines off the field as on it. Led by Emmitt Smith, the charismatic Deion "Prime Time" Sanders, and Hall of Famers Troy Aikman and Michael Irvin, the Cowboys rank among the greatest of all NFL dynasties.

In similar fashion to his New York Times best seller The Bad Guys Won!, award-winning writer Jeff Pearlman chronicles the outrageous antics and dazzling talent of a team fueled by ego, sex, drugs -and unrivaled greatness. Rising from the ashes of a 1 - 15 season in 1989 to capture three Super Bowl trophies in four years, the Dallas Cowboys were guided by a swashbuckling, skirt-chasing, power-hungry owner, Jerry Jones, and his two eccentric, hard-living coaches, Jimmy Johnson and Barry Switzer. Together the three built a juggernaut that America loved and loathed. But for a team that was so dominant on Sundays, the Cowboys were often a dysfunctional circus the rest of the week.

Irvin, nicknamed "The Playmaker," battled dual addictions to drugs and women. Charles Haley, the defensive colossus, presided over the team's infamous "White House," where the parties lasted late into the night and a steady stream of long-legged groupies came and went. And then there were Smith and Sanders, whose Texas-sized egos were eclipsed only by their record-breaking on-field performances.

With an unforgettable cast of characters and a narrative as hard-hitting and fast-paced as the team itself, Boys Will Be Boys immortalizes the most beloved - and despised - dynasty in NFL history.

"Terrific detail.... Pearlman has produced a narrative that is as entertaining as it is insightful." ( Publishers Weekly)
"A lurid yet riveting account of an undeniably charismatic, and often loathed, championship team." ( Kirkus Reviews)

What listeners say about Boys Will Be Boys

This is a football book right?

Well then get someone who likes football to read it. Maybe try getting someone who knows what a football looks like to narrate it.

Arthur Morey is horrible. Who is Troy Ackerman? Daryll Woodson? Steve Beewerline? Mark Ripe yen? Can the Cowboys really lead a game 13 and oh? It is borderline comical to hear Michael Irvin quoted by a guy who is more white then Woody Paige.

The story is good but it is almost unbearable to listen to this nitwit. This is akin to having Troy Aikman narrate a book on Albert Schweitzer. If you can stomach 14+ hours of mispronunciations and monotone drool, then this audio book is for you. You are truly better off just reading this one yourself.

I found the background stories of the infamous 1990's Dallas Cowboys to be fascinating. I wasn't so much surprised that women, drugs, and a fast-and-loose lifestyle were common, but the absolute debauchery that was their culture, especially following the 1994 Super Bowl, was at a level I had not ever previously conceived. My wildest teenage dreams never came close to a typical Cowboys party. In the last few years, I have watched two seasons of Dwayne Johnson's Ballers series on HBO but I honestly just took that for typical HBO sex appeal. In truth, HBO looks extremely tame compared to Pearlman's account of the lifestyle of NFL's demi-gods. Equally interesting was the characterization of owner Jerry Jones who can be easily summarized as a rich old man with an ego bigger than his massive bank account.

As a lifetime Washington Redskins fan, I'm not quite sure how I even picked this book up. And while I admit that I selfishly and naively enjoyed learning all the disgusting details of the loathsome 'Boys (as if Washington didn't have its own tawdry personalities) it was a much more interesting read than I could have predicted. Highly recommend to any football fan.

The narrator did no research on how to pronounce people’s names. It was very hard to Take over and over. Other than that it was good. But my Lord do some research and learn how people pronounce their names

The story is fantastic. Lots of winning, drugs, sex, and big personalities. Not a fan of the Cowboys but this book should be good for anyone who likes drama or football.

Similar to Pearlman's book on Favre but this one takes it up a notch.

Boys Will Be Boys was the finest sports book I've ever heard/read. The authors research and presentation were excellent. I am an avid football fan and I consider myself a quasi historian of the game. Yet, on numerous occasions I found myself listening to facts that I'd never heard before. The story itself was so hard to pull away from that I would have listened to it in one sitting if I had the time. It is so interesting that you don't have to like sports at all and you would still love this book. I actually think that people that don't follow the game would probably receive the most satisfaction because they wouldn't know the end result of the many great characters in this book. In this case, truth is more interesting than fiction.

One caveat though... The narrator was pitiful!!! He obviously had zero knowledge of the game of football nor of any of the Dallas Cowboys. The guy should have done SOME research into how to pronounce the characters names. It was very distracting because I knew the correct pronunciations. I found myself talking back to my IPod trying to correct the dude. Don't get me wrong... When he wasn't mispronouncing names his work was good. He has a good narrators voice, but he constantly jacked up names. In spite of that this was still a 5 star book. If you download it you will not regret it.

another great boom by Jeff Pearlman with tremendous balance and details. Gives the full picture of what happened in Dallas from the late 80s thru the 1990s. the Narrator was average, I had to replay certain parts cause I had trouble decerning who was saying what at different points

It’s a lot. Sometimes too much.

Certainly can’t detract from Jeff Pearlman‘s research. He delves into every nook and cranny of the Cowboys’ lives for a ten-year period. Can’t fault his storytelling, since he takes an awful lot of puzzle pieces and puts them together in a well-fitting puzzle. However, whether you’re a Cowboys fan or not, this still comes off as a very negative book. Not that the players actions or attitudes don’t lend themselves to that mightily. They do. However, there were several times where negative spins were put on obviously positive situations - seemingly to just fit the theme that none of these folks had any redeeming qualities at all. If you want salacious, this is where you can get it, and the book details certainly don’t hide from that. But it’s likely way more than you ever wanted to know. About the Cowboys… Or anyone. Finally, the narrator’s pace may turn some off, because it is very slow and plodding, and he does butcher several names (although if you weren’t a Cowboys’ fan during that period, some of them are easy to mispronounce), he does a satisfactory job.

As an Eagles fan I have nothing but hatred in my heart for Cowboys. But this book made me admire that generation. Fighting through adversity and flawed character of players and coaches they owned the league. Great listen. Great

Not a Cowboys fan, but I’d still recommend to sports fans

I wish Pro Sports Clubs in general would quit protecting their players as if they were their children. They’re grown men & should pay the price for their actions ... then it wouldn’t take them 20+ years to have the revelation of Michael Irvin with which the Author closes the book.

Narrator does a better job than the 3 stars I gave him, but I had to remove 2 stars for the horrible pronunciation!

If I heard the narrator refer to Atlanta’s “Fulcuns” instead of Falcons one more time ...