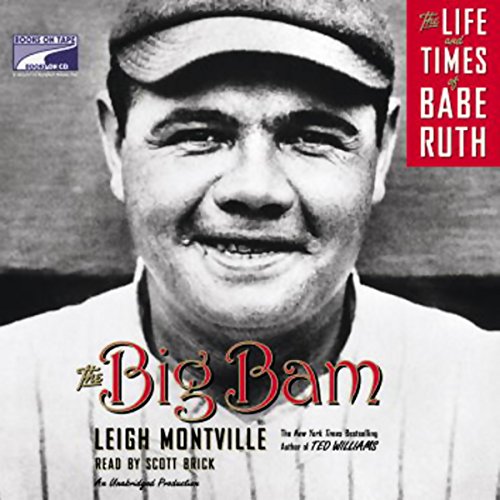 By: Leigh Montville
Narrated by: Scott Brick
Try for $0.00

Babe Ruth was more than baseball's original superstar. For 85 years, he has remained the sport's reigning titan. He has been named Athlete of the Century...more than once. But who was this large, loud, enigmatic man? Why is so little known about his childhood, his private life, and his inner thoughts? In The Big Bam, Leigh Montville, whose recent New York Times best-selling biography of Ted Williams garnered glowing reviews and offered an exceptionally intimate look at Williams's life, brings his trademark touch to this groundbreaking, revelatory portrait of the Babe.

Based on newly discovered documents and interviews, including pages from Ruth's personal scrapbooks, The Big Bam traces Ruth's life from his bleak childhood in Baltimore to his brash entrance into professional baseball, from Boston to New York and into the record books as the world's most explosive slugger and cultural luminary.

At a time when modern baseball is grappling with hyper-inflated salaries, free agency, and assorted controversies, The Big Bam brings back the pure glory days of the game. Leigh Montville operates at the peak of his abilities, exploring Babe Ruth in a way that intimately, and poignantly, illuminates a most remarkable figure.

"[Montville is] one of America's best sportswriters." (Chicago Tribune)

What listeners say about The Big Bam

This was an excellent book on the life of Babe Ruth. Every baseball fan should read. Babe Ruth was probably one of the greatest or the greatest ever to play the game. This book tells a story not only about baseball of this era but the life he lived.

I haven’t read a baseball book in a long while but when I saw the narrator was Scott Brick - I’m in. The story moves along quickly, more focused on the man than on his baseball prowess. There is enough about baseball to keep fans reading, but enough character study to keep avid readers enthralled.

Scott Brick narrates the book. Enough said - he’s the best in the business.

Great story.
The Babe saved baseball no doubt about it.
This was great book.
I wonder if he would hit a hundred HRs today!

See Just How Great the Babe Was

We know he hit a lot of home runs, but his single season and total records have been broken. So was he really a big deal? This book puts it all into perspective. His stats were staggering compared to everyone else in the era... 3 times as many home runs as the previous leaders. He was as popular as Michael Jordan and John Mayer put together... a symbol of the country. And wait until you read how fast the Babe was going when he was ticketed for speeding down Broadway. The Brick / Montville duo is the best. I would say this is not as good as the Ted Williams book, but close.

I nearly gave up on this book. Over 40 minutes into it before the author stopped speculating and inventing heresay. Reminded me of the awful Babe Ruth movie "The Babe" with John Goodman. Lots of information, but overall disappointing for a baseball nut who understands that Baseball is a game re-invented because of Babe Ruth and that no other figure in its history has been as significant.

The Legend, and the Man

Leigh Montville is a long time sportswriter for the Boston Globe goes behind baseballs greatest player and finds; well basically, he finds mystery unanswered questions and many stories of excess. He also passed on many of the extraordinary legends surrounding "The Bambino's" excessive appetite for food, drink, women, and spending.
He also brought forth the less well known facets of of the slugger's life; Ruth seeking out a personal trainer. Ruth being one of the few players making enough money to not need an off-season job. The unwillingness of the games owners to look past his earlier indiscretions, his image having been forever forged by his wild, reckless twenties.
Montville investigates stories about the supposed feuds between Ruth and fellow Yankee legend Lou Gehrig, his Hall-of-Fame manager Miller Huggins and his chief challenger as the games preeminent player Ty Cobb. A better than average biography and an excellent book on baseball.

What a ride thru the life and times of the Babe!!! The book had me smiling and laughing all the way thru, the guy just never stop moving!!!

A Biography Flawed by the Unknowable Facts

The book's first chapter is largely spent owning up to its biggest problem: There's a whole lot we don't know - and will probably never know - about Babe Ruth. In some cases there are major turning points in his life, or major figures in it, which aren't known to any historian. Look elsewhere online and you won't find more than a couple of other details about the subjects. In some cases it simply feels as though we're watching a celebrity from afar, because the small anecdotes and thoughts of private life weren't recorded. Some famous people record all of their mundane thoughts and feelings in letters and diaries, or have hordes of associates eager to blab about them in interviews. Some barely ever wrote a sentence and kept their real circle of trust fairly small. Ruth is in the latter category. I don't blame the author, but it does at times make the book less exciting or fulfilling than other historical biographies I've read.

Excellent in every way, especially the first section that describes in great detail his upbringing at St. Mary's School.

The Sultan of swat!

This book captures Babe's personality and larger than life baseball career. He is personally an idol for me and has been for years, although this book informed me of some facts that I didn't know before.

His personality, his humour, his home runs and his baby face are what make Babe Ruth one of the most entertaining sports personalities of the century. Whether you're a fan of baseball or not, buy this book as it will engross you and keep you interested throughout. Enough said - BUY IT!