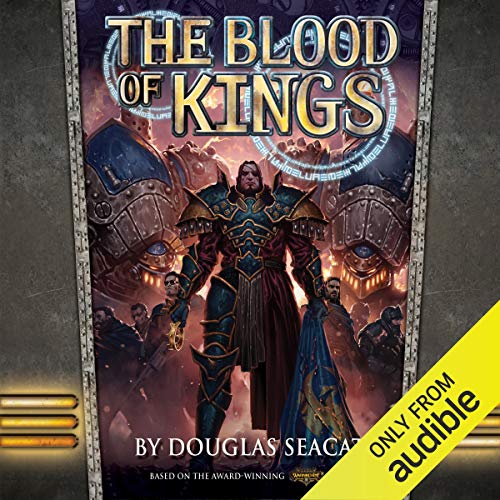 The Blood of Kings

By: Douglas Seacat
Narrated by: Bernard Setaro Clark
Try for $0.00

Forged in the fires of conflict, the Iron Kingdoms is a fantastic realm where the combined power of magic and technology thunders across a landscape shaped by war. Dominating the field of battle are rare individuals who have mastered both arcane and martial combat and who boldly lead mighty armies in the ongoing struggle to claim victory over these ancient lands.

Three men who would be king threaten to sunder a kingdom, provoking a war that will drown its lands in blood.

Amid the backdrop of a new Cygnaran civil war, the fate of the kingdom depends on the outcome of a covert struggle between two powerful warcasters - the gun mage Allister Caine and the mercenary warlord Asheth Magnus. Caine faces a moral quandary as he seeks to kill the bastard son of Cygnar's former king, knowing he must end an innocent life to preserve the peace. But Magnus is equally determined to see the bastard crowned as king - and is willing to kill anyone who gets in his way. Regardless of who emerges the victor, the blood of kings must be spilled to end an otherwise interminable war.

What listeners say about The Blood of Kings

Would you consider the audio edition of The Blood of Kings to be better than the print version?

Clark's narration really brought the characters to life. No offense to Doug Seacat but his prose isn't always the most engaging (world-building is definitely his strong suit).

What was one of the most memorable moments of The Blood of Kings?

I enjoyed the scene where the former ranger, now spy, was tracking targets through the city.

Which character – as performed by Bernard Setaro Clark – was your favorite?

Drake McBain, the mercenary commander. His constant talk about contractual details and payment brought a much needed levity to the fairly serious story of a kingdom in the midst of a succession crisis/civil war.

having listened to some other iron kingdom books i had my hopes up, but this fails to really give anything. the writing is dry and split between more characters then the writer can really do. it drudges along and reads more like a slightly embellished after action report from a table top tournament. good narrator, but thats all thats going for it.

spoilers warning don't read on if you don't want spoilers

over all a good story even if you know nothing about the world of warmachine. my one complaint is the same I have with all warmachine/hordes stories I've read and that is the stories never waiver from the way the models are in the game if Magna us is a merc at the beginning then he's a merc at the end just because it feels like they don't want to have people see story changes as game changes. same can be said for the relative safety of "main charecter" are they in the minis game oh they are cool here is some bad stuff for them to go through but there never ever going to be in real danger. it may seem like Caine is in some tight spots but he always and I mean always comes out on top in the end. but if you know what your in for when you pick it up which is a nice Warhammer fluff peace about the return of Vinter Railthorn and a cool Cygnar civil war then your in for a good read just don't expect it to be more then the fluff from the game books.

I loved this book. It was fun to have most of the timeline of Warmachine laid out and expanded upon.

Everything about this story just worked. The characters were all really interesting, including the minor ones. The combats were well written and the politics were well crafted and the decisions felt like they had an impact.

The combination of very engaging plot and awesome narration with different accents really kept me hooked! Book requires a bit of background knowledge, but it's nothing that can't be fixed by visiting WM wikia and learning a bit of the world.

I'm not usually one for fantasy novels but figured I'd give this a shot because of the unique combination of kingdoms, magic, and steam powered robots.

Turns out that all makes for a good story! The characters felt fleshed out and made decisions that were consistent with their earlier characterization. No one seemed to make a dumb decision solely for the plot, a rarity in modern times.

I enjoyed the way magic seemed to work, it felt grounded and not overly powerful. It was like a tool or weapon more instead of something just used to get characters out of impossible situations.

The robots essentially having the mental capacity of a dog was a nice touch.

All around I would highly suggest this book.

good primer to the iron kingdom

It lays the ground work for the Cygnar faction. you should read this book first.

Absolutely one of the better warmachine audiobooks

This is a great story for fans of Warmachine and newcomers alike. It really fleshes out the internal strife that cygnar suffers and brings some great characters to life.

As a warmachine player

This book is well read and a great listen for people interested in the background Lore for warmachine and hordes. It covers a broad range of characters featured in the miniatures game from the mercenaries and Cygnar factions. So if you are interested in Asheth Magnus, Allister Caine, Drake Macbain, Coleman Stryker, or even Markus Brisbane, we spend a decent amount of time on them and events that effect them pretty significantly, in this book. Lots of action and character moments. Probably a B grade read for someone who’s just into fantasy/steampunk warfare, but for a Warmachine player it’s delightful, and ranks higher as a result.

likely incomprehensible if you don't know the setting, good stuff if you do. particularly impressed by all the voices and accents done by the narrator. a lot of murky motivationa and uncertain reasons in this tale of a civil war :)

Pretty good all around

I got this book off of Audible premium. It does have slow bits and there is an over usage of the phrase "he said", but all in all it was a good story and it had a definite ending.

Storyline was amazing and performed beautifully. the Narrator was great. a good read for anyone.

An exciting conclusion to the last ten years

The Blood of Kings is a well written and well paced book, with plenty of fan service to those of us who play the tabletop game.
The novel is mainly about Captain Allister Caine and his misadventures and botched assassination attempts. Having not read any of the other books about Caine specifically, I found it very interesting to see the Warcaster represented in the novel so heavily, and am very excited to play him more in my tabletop games as well as to see what the future holds for the character.
Seacat needs a better editor. There was a few times where a particular character narrowed both of his eyes when he actually only has one (hint hint). And there was a few too many instances of He did this while he did something else to him, while talking about two different male characters. It lead to unnecessary confusion, but I still enjoyed the novel on the whole.

Highly recommended to fans of the tabletop game but I would still give it the thumbs up to anyone looking for a steampunk action fantasy book.