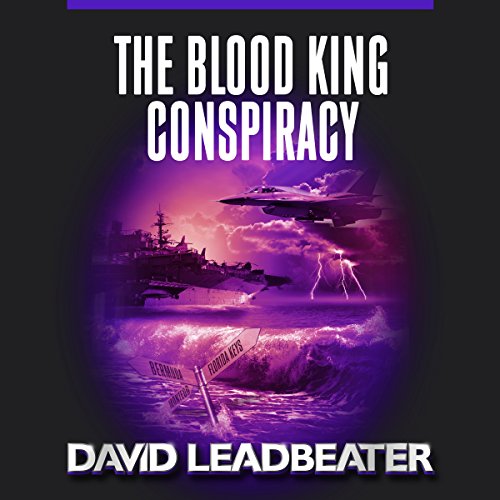 By: David Leadbeater
Narrated by: Nigel Patterson
Try for $0.00

In this much awaited sequel to The Bones of Odin, Matt Drake takes his thirst for adventure to an even higher level when an incredible device dating back millennia is salvaged from Blackbeard's ship, the Queen Anne's Revenge.

With the answer to the mystery of the Bermuda Triangle in their hands, America is attacked on its own soil by the Blood King - an underworld figure so powerful his very existence is a mere myth: a man who coerces people at the highest levels of government and society; a man who sends an army to first storm a USS destroyer guarded by hundreds of marines and Special Forces soldiers and then to steal the secret of the Bermuda Triangle - a source of power that will allow its owner to hold any civilized government to ransom.

Matt Drake and his friends must follow a treasure trail through rich pirate history that leads beyond the death of Blackbeard himself, through modern sea battles and warfare on the streets of Key West to a showdown with the most dangerous, well-connected, and feared man in the world - the Blood King.

What listeners say about The Blood King Conspiracy

Book 2 in the series doesn’t disappoint. It’s a rampaging thrill-ride with some outstanding characters. Not only are the best characters back from the first novel, but some amazing new good guys join the cast. Just as important, some outstanding new antagonists join the fray… folks who are likely to make appearances in the future.

While the book touches on the phenomenon of the Bermuda Triangle, and the source of its mysterious history, the plot never digs into the guts of the matter. Maybe the next book will pick up where this one leaves off. I hope so. So much fertile, unexplored ground is left waiting for readers to experience.

I liked Book 2 even better than book 1

Book one was great, but the story here was so much better for me. I love these types of books and will definitely look for more from this author and narrator!

Get into this series RIGHT NOW!

Unless the coarse language of military guys bothers you, this seems to be the fantasy badass series to read! What's not to like with Cia, SAS, Blackbeard, and time travel device. I loved it, and USMC grandson snarked at me because I found this first. Thank you AudioBook Blast!
NP is the PERFECT audio performer here. A Brit (see above SAS), cadence, rate of speed, inflections all great. Gives voice to all the characters and interprets their personalities with apparent ease. Way to go!

The "Blood King Conspiracy", This is a follow up for the 1st book . From high adventure to emotional turmoil - this book has it all. The author takes you on a rollercoaster of thrills and expectations.Good book 2

I have read all the Matt Drake books and seen the character development and interactions grow. This book introduces the Blood King, who is the starting block for all the destruction and mayhem that ensues in the first 8 Matt Drake books. These books are not really standalone reads and the same goes with the audio collection, you really need to have read or listened to the first book. The only downside to this book, no Mad Swede, Torsten Dahl!!

Nigel Patterson delivers another polished performance. He is very easy to listen to and understand, this book has more character dialogue than the first and it is handled very well and is easy to follow. This is important, as one of the best things about the Matt Drake series, is the character interactions and the quick fire comments between them.

Being a big fan of the books I was pleased to see the Drake Series being put into audible format. I like Nigel Pattersons' style of narration, which is measured, in contrast to the fast pace of the books. Looking forward to being able to listen to the rest of the series.
These books are best if read/listened to in publication order as there is a thread running throughout giving you greater insight into the characters history and motivations.