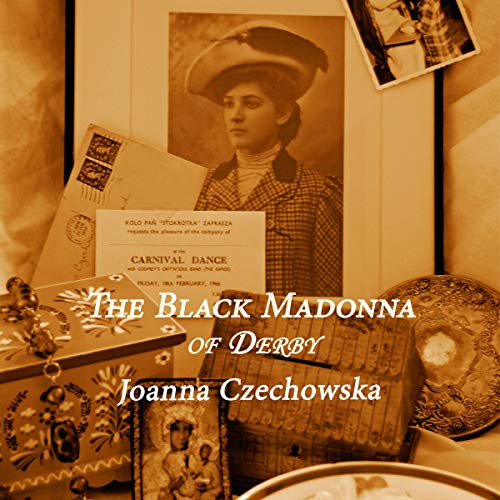 The Black Madonna of Derby

By: Joanna Czechowska
Narrated by: Claire Nicholls
Try for $0.00

During and after the Second World War, 200,000 Poles were given leave to remain in the UK as thanks for their help during the conflict - this book is a fictional account of just one of those families. Set during the 1960s and 1970s, The Black Madonna of Derby traces the story of the Baran family living in a provincial town in England. Their seemingly ordinary existence hides secrets of past betrayal, madness, and tragedy.

The story focuses on three generations: the elderly grandmother whose proud Polish patriotism hides dark events from the past that affect the present, the mother whose tries to meld her past life in war-torn Poland and Germany with her new life in England and the granddaughter who lives a double life culturally and linguistically - Polish at home and English outside.

The swinging sixties in London is vividly recreated, as is the hardship of life under communism in the Poland of that time. This book is unique in that there are no other novels dealing with the story of second generation Poles in the UK. It is a story that deserves to be told, a story of a group of people who have had little attention in the literature. Listen to what they have to say.

What listeners say about The Black Madonna of Derby

Gritty, compelling story of a Polish family in UK

The Baran family of Derby, England, is caught between its Polish past and its English future.

Barbara and her daughter Helena both survived the war, but separately. On one awful day in Warsaw, Helena got caught in a retaliatory roundup that Barbara just escaped, and was taken to Germany. She became a slave laborer in a clothing factory that made German uniforms. Barbara, left behind, kept her head down and survived the war. After the war, Helena made her way to England, married a Polish man who also came to England after the war, and had three children, Wanda, Zosia, and Janek. Eventually, she found out her mother was alive, in Poland, and asked her to come to England.

We follow the lives of the family through the sixties and seventies.

The three children all handle their Polish heritage very differently, with Zosia in love with her grandmother's romantic version of Poland before the war; Janek, the youngest, embracing England and English ways completely; Wanda, the oldest, caught between the two, running away from her Polish heritage but not completely abandoning it.

Over the years, we see how many secrets the family has. Barbara has important secrets she hasn't told her daughter and grandchildren about her husband, Pyotr, who was, she wants them to remember, a prince. Helena has her own secrets, about Germany and her war years there, and about how she really feels about her mother, just a few feet away from her, not having been caught in the roundup. Zosia never tells her parents about what she experiences at the "better" school she gets into with her excellent test results. Wanda, after she goes to London to work in a clothing shop, has secrets of her own, about her friends, and her experiences in the rented room in a vicarage.

These are each in their own ways strong characters, building new lives and new identities in what is, for them, a new country. It's gritty story with some real hardships and losses, but also real victories. Czechowska cares deeply about her characters, and makes them real individuals, with strengths and weaknesses. It's not an easy read, for the most part, but it is a good one.

I received a free copy of this audiobook from the publisher, and am reviewing it voluntarily.

Joanna Czechowska weaves the stories of three generations of women in a Polish family together, in both Poland and England. Beginning in WWII and continuing into the 1960s we become immersed in the lives of these women as their lives change and play out over the corresponding years. With flashbacks, dreams and actual life we learn about communist Poland, Poland during the war and some treatment of the Polish people by the Nazis, how certain companies flourished during the war, then life in the UK as an immigrant and second generation. It was interesting to see how each of the three siblings reacted to their Polish heritage. One refuses to speak the language and even changes his name, one embraces her heritage and visits Poland to see and learn what it is really like, and the third is somewhere in the middle. The Black Madonna of Derby is not a light read, it is gritty, and dark at times. It deals with ordinary people living an ordinary life. Secrets come out in some emotional sections of the story, but overall, it is an honest, dramatic story. There were parts of the book that dragged a bit, but for the most part, I was quite interested.This is a time and events that I was not familiar with at all. The original book was published in 2006, but the audiobook just came out this year. It was narrated by Claire Nicholls. I have never listened to any other books she has narrated, but I was impressed with her delivery. The pacing was perfect and her expression and pronunciation helped with with the names and polish words. I was gifted a copy of this audiobook through Rachel's Random Resources upon request. The rating, ideas and opinions shared are my own.

Secrets and tragedies of a Polish family in Derby.

This is a fascinating story about a Polish family living in Derby during the 1960s and 1970s. The family came to England after WW2. Behind the facade of an ordinary family hides the horrors they've faced, their secrets and tragedies. It's an extraordinary story.

The characters are authentic and relatable. The story draws the reader into the characters' lives, and you care what happens to them. The insights into the 1960s and 1970s in England and Poland are interesting and vividly portrayed.

The clear professional narration brings the story to life.

I received a copy of this audiobook from the author in return for an honest review.

I found this book difficult to follow initially, I think the unfamiliar names of Polish characters threw me a bit. Once I grasped who was who, and the story unfolded, I was hooked.
The narration saved me, being so easy to listen to, drawing me in to the fascinating history and experiences of the extended family.