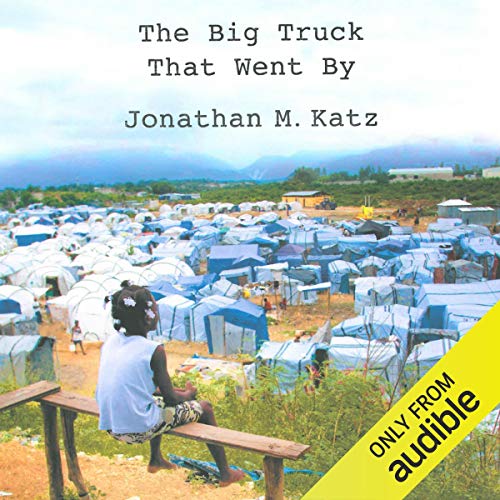 The Big Truck That Went By

On January 12, 2010, the deadliest earthquake in the history of the Western Hemisphere struck the nation least prepared to handle one. Jonathan M. Katz, the only full-time American news correspondent in Haiti, was inside his house when it buckled along with hundreds of thousands of others. In this visceral first-hand account, Katz takes readers inside the terror of that day, the devastation visited on ordinary Haitians, and through the monumental--yet misbegotten--rescue effort that followed.

More than half of American adults gave money for Haiti, part of a global response that reached $16.3 billion in pledges. But three years later the effort has foundered. Its most important promises--to rebuild safer cities, alleviate severe poverty, and strengthen Haiti to face future disasters--remain unfulfilled. How did so much generosity amount to so little? What went wrong?

The Big Truck That Went By presents a hard hitting investigation into international aid, finding that the way wealthy countries give today makes poor countries seem irredeemably hopeless, while trapping millions in cycles of privation and catastrophe. Katz follows the money to uncover startling truths about how good intentions go wrong, and what can be done to make aid "smarter."

Reporting at the side of Bill Clinton, Wyclef Jean, Sean Penn, Haiti's leaders and people, Katz also creates a complex, darkly funny, and unexpected portrait of one of the world's most fascinating countries. The Big Truck That Went By is not only a definitive account of Haiti's earthquake, but of the world we live in today.

What listeners say about The Big Truck That Went By

This story angered and cheered inside me

I had NO idea just how bad it was in Haiti and how America was as much to blame for the history as well as the current state of affairs in Haiti. I am ashamed of the way America has abused the country and left the people in dire living conditions and no way to fight their way out of it. In this situation - we, America, truly ARE our brother's keeper. But where have we been? Instead of helping these people out of severe poverty, we have contributed to their misery through greed, black markets, and just turning our heads away from what these people are facing every day.

We are making Puerto Rico into another Haiti if we don't step up our help after the devastation of the hurricanes which left the country (our American Citizens!) struggling for the most basic living items. Water, Food, Housing, Medical care. If we don't want a second Haiti on American soil, then we need to learn from Haiti and the mistakes made so they are never repeated. In addition, we need to gather other countries who are willing to start from scratch and build Haiti into a habitable country for once, and then take our greed home and let them manage their island.

Best book on Haiti by far. Katz nailed it and it was a fascinating read

loved it from start to finish. Gives us a perspective that we would otherwise not be able to get of it was not for the first hand in filtered experience.

The book was enjoyable and informative. I enjoyed learning about the island country of Haiti. I would encourage anyone who has had questions about the disaster of the earthquake and cholera outbreak to read this first hand reporters account.

Excellent first hand experience of the complexity that was the Haitian earthquake and the world's response. Highly recommended,

Anecdotes and jounalism. Mr Katz makes us live the analytic life of a foreign correspondsant .

Excellent Introduction to life in Haiti

Brief historical overview and life better explained from someone who lived and worked in the country. It’s a better overview than anyone could get on a brief visit or reading of a history book on the country. Thank you Mr. Katz.

This book was very well done, told the story from someone who was there and gave an overall great insight into why so many things failed

Read (or listen) before you go to Haiti

I have visited Haiti 4 times since the earthquake on January 12, 2010 in a humanitarian capacity. This book can help you!when answering the inevitable question we all get before we go to Haiti, Where did all the money go?! It would be a great introduction to a course on Haiti After the earthquake. Thank you Mr. Katz!

Shedded a lot of light on a highly politicized and distorted topic. I liked the use of the narrators accents to get the different nationalities.