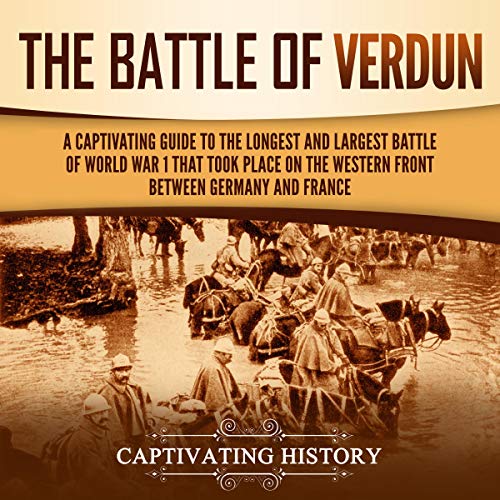 The Battle of Verdun: A Captivating Guide to the Longest and Largest Battle of World War 1

If you want to discover the captivating history of the Battle of Verdun, then pay attention...

Today, the landscape is marked by shell craters, pillboxes, and empty trenches. Mother Nature has tried to reclaim the terrain; the trees have grown again, and the ground is covered by lush green grass, but despite her best efforts, the scars on the landscape still remain, a constant reminder of the devastation and misery that was experienced here more than a century ago.

And that is as it should be because the world should never forget what happened in this small corner of France. The battle scars on the landscape of Verdun are a testament to the horrors of a war that will live on in the collective memory of a nation forever, but they are also a memorial to the brave men who fought and died in the muddy fields defending their country and their countrymen from a foreign invader.

But Verdun was not just a battle; it was a seminal moment in French history. This is the battle that defines the First World War for France, but it cannot be viewed in isolation. It is part of a far greater story, influenced by the many events and battles that took place during this bloody time in Europe’s history.

In The Battle of Verdun: A Captivating Guide to the Longest and Largest Battle of World War 1, you will discover topics such as

So if you want to learn more about the Battle of Verdun, scroll up and click the "add to cart" button!

What listeners say about The Battle of Verdun: A Captivating Guide to the Longest and Largest Battle of World War 1

No drama or human interest. No background or political story or intrigue. Basic facts for a fifth grader.

I really enjoyed this book as an intro to Verdun, and WWI as a whole. I knew the basics of WWI: trench warfare, major battles, some political issues, etc, but nothing in-depth.

I really enjoyed listening to this book. I found it to be a clear, understandable description of the entire battle and its main protagonists.

The author reads both German and French and had excellent access to archives and personal interviews. This book is a fantastic page-turner.

Listening to it one comes away with a sense of the appalling waste and uselessness of it all. Amazing

I Loved This Book

I'm just beginning to get involved in World War I history and I found this book to be an excellent introduction to the Battle of Verdun. The author does a good job showing the political intrigues by the generals at the top and how they were utterly out of touch with the experiences of the soldiers in the field, and of the reduction to the meaninglessness of the courage of the individual when faced with an artillery barrage.

The start of the book is a little assuming, however, covers itself when talking about the battle. Rest guaranteed, every name is accounted for and the author lets you get to know who's who throughout the book.

This book does give a very good summation of the events leading up to Verdun and its aftermath. It is the second of Horne's series on important French events.

The French considered the best defense was the assault, so their uniforms were blue to blend in with the sky as they stood up and hit. This made them good targets. French soldiers attacked in waves over and again and suffered enormous losses.

It is exceedingly refreshing for once to read an author who pays more than trivial attention to both the successes of the French Army and the importance of fortifications in World War One.

This story is well told. It serves not only as a first-class history of one of the world's most ferocious battles but also as a proof to the banality and waste of war. Highly recommended

The author's research is remarkable and even the account of the German capture of Fort Douaumont by Kunze and Radtke have drawn credit from Kunze himself years after the battle.

This is a good book on the battle of Verdun. It's apparently the best book in English on the subject and it very accessible to the ordinary reader in terms of explaining the battle and reporting its story.

Best book on the Battle of Verdun. I will understand this book again multiple times.

Great book on the Battle of Verdun by a Master Historian! Although it was written over 50 Years ago (and gets some criticism from young Historians) it still rings true with the action, experience, and political/Military machinations inherent in World War One!

A frightening account of a terrible battle in WW-I. This battle was all about artillery, not necessarily infantry movement.

The story of the battle of Verdun. A very sad occasion, that is so well written that it is so easy to understand. This is a great book that everyone should read to understand what young men had to endure for their individual countries.

A model of military history for the public at large, Captivating History’s work is as timeless as the Battle of Verdun itself.

Captivating history is a writer par excellence, his writing style is beautiful which the reader soon learns to appreciate as he tells the complex story of one of the great battles of World War 1.

This was an awesome book. I would highly recommend it to anyone interested in reading about World War I. This is an excellent writer.