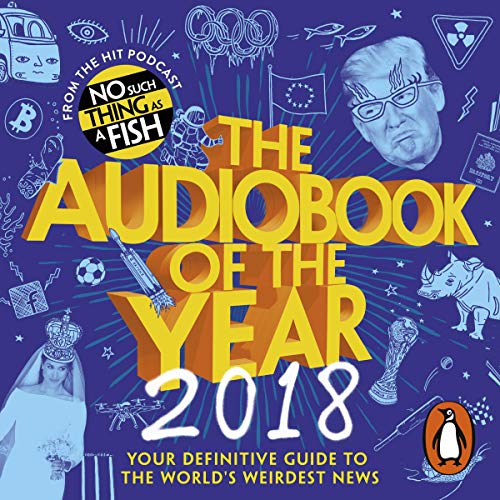 Random House presents The Audiobook of the Year (2018), written and read by the team behind hit podcast No Such Thing as a Fish: James Harkin, Jane Hill, Dan Schreiber, Andrew Hunter Murray and Anna Ptaszynski.

Think you know what happened in 2018? Think again.

Compiled and written by the creators of the award-winning hit comedy podcast No Such Thing as a Fish, all of whom are researchers for QI, it will establish - among other things - that:

Ranging from the distinctly offbeat to the wonderfully ludicrous - from the South Africans who were rationed to just one toilet flush per day, to the Nutella riots spreading across France, via the Miami bitcoin conference that stopped accepting bitcoin - The Audiobook of the Year (2018) promises a fact for every occasion and will prove the perfect Christmas gift for all trivia buffs.

What listeners say about The Audiobook of the Year (2018)

if you like the podcast, you'll love the book.

if you like the podcast, you'll love the book. always a joy to listen to!

this is an extended fish podcast, straight up. It differs in; having chapter titles, more "layout"than their regular episodes, and written word puns (which are always explained by the narrators). it's also more current event based (or recently current) than their normal episodes, speaking moistly of things from the year in the title, rather than doing historic dives like they do on the podcast. All of their charms and quirks are present and on full display, if you enjoy the podcast there's very little reason to think you won't enjoy this "audio book" *cough*long form podcast.

I've always wanted them to have a Patreon setup, and I feel this purchase will have supported them, without the bonus of ad free episodes (there are no ads in this audio book, but I really wouldn't mind paying to have ad free no such thing as a fish podcast)

always entertaining and I really enjoyed this book. I also learned a lot from it.

A book to listen to many times

Very entertaining, I have listened to this a couple of times and will probably listen a couple more. It never gets old.

Never Fails to Entertain and Educate

Love the podcast and love the audiobook!!
Off to listen to The AudioBook of 2019.
Keep them coming team!!

One of few good ways to remember 2018

All the nerdy joy of the annual compendium of facts, with so many hours of wit and silliness added that it’s like having three extra books. Perfect for driving or public transport (barring the odd bark of laughter), and the only retrospective of 2018 that I trust.

Perfect way to summarize a year

I mean, there is not much to review about this book other than to say that it was a 10 hour No Such Thing as a Fish Podcast which I can't complain about; makes a perfect way to summarize each year. The Audiobook version is 100% the only way to go for this particular book.

Perfect way to summarize a year

I mean, there is not much to review about this book other than to say that it was a 10 hour No Such Thing as a Fish Podcast which I can't complain about; makes a perfect way to summarize each year. The Audiobook version is 100% the only way to go for this particular book.

This book is just what I was looking for comedy. I'm glad ive found. It. I'm hope to buy more of them

Dale Turchan Patrick1335@att.net
Please email. Me when there's more of them Thank you. For your help..

No such thing as a bad audiobook

Absolutely loved every moment, tried to drag it out to prevent it from ending to soon and am about to start it again.

Love the content but bad editing nearly spoilt this. Multiple takes were left in and sometimes words were interrupted randomly.

still enjoyed it though

I really enjoy the podcasts to a 9 hour version is great for me. It suffers from poor editing however with lots of repeated sentences not being removed and chapter titles inserted in the middle of sentences.

I refuse to listen when British people refer to football as soccer. Sort it out guys

If you enjoy "No such thing as a fish" you won't be disappointed. Like an extended episode, with additions you won't get in the print edition.

Since it's written and narrated by the NSTAAF team, it's like a 9 hour podcast with the same demeanour and banter. If you're a religious follower of the podcast then you'll notice a few repeats, but the majority of the content is new and fresh. Unlike most current-event-based productions, this could be visited years down the line and still be interesting. NSTAAF did a great job producing a light-hearted review of the year's weird news,, exactly as I had hoped it would after following the weekly podcast.

If you love an entertaining and informative podcast this is definitely for you. Read out by the four QI elves who do the No Such Thing as a Fish podcast it's like the best, longest, podcast ever.

An improvement over the original as it's more chatty, like the podcast, with less long lists of things. It is hard to play this via Alexa if you also own 2019 though, Alexa will play 2019 unless you specify the name in a specific magical way. Listen to this first, then order 2019 if you'll be listening this way

Entertaining and worth a listen

Entertaining, interesting and worth a listen. I appreciated the extra content. I do slightly prefer the podcast though.

No such thing as a book as good as the podcast

Filled to the brim with interesting and hilarious facts of the year 2018, but I don’t particularity like that they read the facts rather than render them Moore freely like in the podcast.

loved it! Even better than last years!

I love them so much! Inertesting and funny as usual and could listen to these guys talk all day. I am a huge fan of QI, but these guys are the real stars of the show.

I love the Fish podcast, and this is basically like an extended episode of that. it's got all the best things about the podcast, especially Dan being an idiot and everyone else trying to work through it!

If you like the podcast you will like this. Very funny. Very limited life spam as current data.

Exciting and fun as always

If you enjoy 'Fish, you'll enjoy their audiobook of the year!

Another fantastic audio book from these absolute legends

Really interesting and often very funny, this is a great listening experience and highly recommended.

Loved it. Listened to it in it's entirety during a road trip between Melbourne and Sydney. It made the trip so much quicker. I did the same thing last year with the 2017 edition. I hope NSTAAF put out a new edition every year so I can continue the tradition.

As you can tell by the cover there's a lot of trump bashing in this book. I would have given it a higher score, however, when they're quoting things Stormy Daniels says as fact I find it hard to believe everything their actually saying.

Generally I do enjoy there podcasts, but I'm just a bit over the Trump bashing and it appears they a bit one sided in there opinions.