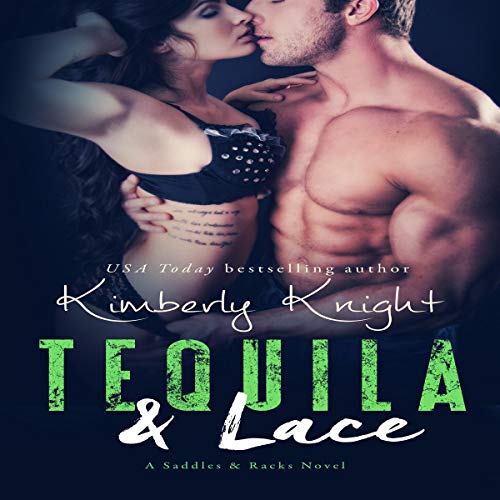 By: Kimberly Knight
Narrated by: Kylie Stewart
Try for $0.00

Army strong and dripping with sin....

Paul Jackson had his dreams mapped out. He’d graduate from high school, attend college, go pro for football, marry his high-school sweetheart, and live happily ever after. Until she threw away everything he never knew he wanted. Throwing caution to the wind, he put his country’s dreams before his own.

The army was a perfect distraction from her. It helped him become a man. To serve, to protect, to fight, to become strong. But when Paul returns home after three tours, he knows there’s nothing better than sexy woman, a shot of tequila, and a pocket full of cash.

But he still thinks about her....

Joselyn Marquez’s life changed the night of her 17th birthday. A 48-hour roller coaster trip sent her running for her life. She was homeless, and her family had disappeared. All odds were against her.

But sometimes, the odds work out.

Years later, she’s an FBI agent serving as an undercover escort to investigate sex trafficking in Las Vegas. When the investigation connects her past, will she be able to do the right thing, or will she still keep running from the night of her 17th birthday?

And the past will come knocking.

What listeners say about Tequila & Lace

This is Paul Jackson and Joselyn Marquez’s story and is darker than the first one.
Haunted by her mother’s betrayal and the pain she her mother’s actions caused when she was 17, Joselyn ran and didn’t look back, leaving behind her mother and 8 year old brother.
I really admired Joselyn and her dedication to bring the bad guys to justice. Her determination and tenacity in trying to make the world a safer place for women and children was truly admirable.
Tequila & Lace had suspense, danger, intrigue, steamy scenes and characters that you couldn’t help but like. There was also a twist that I did not see coming which added to the experience.
The narrators did a great job in bringing the story to life; all in all a captivating story and I am looking forward to more in this series.

I have enjoyed several of Kimberly Knight's books in the past. This was a reminder of why. This was the first book I've read/listened to in this series. I will go back and get book one! Such a hard, dark past for Joselyn. She is so brave and strong. Paul was a great hero, fun and caring. Couldn't help liking him. The twist towards the end was stunning! I look forward to Seth's story in the next book!

Kylie Stewart and Eric Rolon were EXCELLENT narrators. They both have quickly become favorite narrators of mine. I absolutely love Eric's laugh. It was the best!! Their performances were perfection.

book two definitely lived up to my hopes after book one! darker than book one but with the same awesome chemistry and steam! amazing narration again!
#audiobookobsessionreviewer

Paul and Joselyn’s story broke my heart but also put it back together gloriously. I loved being able to see snippets of Gabe and Autumn too.

Paul’s story!!! Two people who are absolutely lost. Their pasts have broken them. They come together in a way that never should have. Their love is sweet and yet 🔥🔥🔥

This took a turn very early on in the story. Joss and Paul had intense and instant chemistry. The story had some crazy turns

I received this book for free for a honest review.  I loved the characters and storyline.  it flowed very well and held together.  sexy,The narrator did an excellent job of bringing the characters to life.  reccomend

If you are looking for a great listen that has drama and suspense, then choose this book. The narrators did a pretty good job of conveying the characters and emotions along with story. I am a big fan of this series and cannot wait to listen to more.

Kimberly Knight story is about how a horrible act on Jocelyn 's 17 birthday changed her life and her younger brother, Brice, life forever. Jocelyn worked undercover at the FBI for sex trafficking. Never in her life did she think she would fall in love. Would her secret destroy what she and Paul built ? Would he understand why she's undercover? And the horrible surprise she found out about her brother and what he's involved in. That guilt has always plagued her since she was 17. Why didn't she go back for him?
Kylie Stewart and Eric Rolon told the story with such emotion. Giving each character their own voice and personality
🎧audiobookobsessionreview🎧

Paul and Joselyn were Perfect for Each Other!!!

Joselyn's life changed dramatically on her 17th birthday after being betrayed in the harshest way by her mother. She runs away and later joins the FBI and uses her personal experience as motvation to help take down a sex trafficking ring in Las Vegas. While working undercover in Las Vegas she meets Paul who is her roommate and they immediately hit it off. Paul had been burned by his high school love who broke his heart, so he decided to join the Army and then utimately found himself working in Las Vegas as an escort.

Joselyn and Paul had great chemistry from the start. Despite the unusual nature of their employment, they developed a friendship and then worked to slowly disengage from the escort business so they could ultimately be together. I enjoyed how Paul worked to get Joselyn to trust him and ultimately open up about her past trauma. This book did have a couple of little surprises thrown in which kept me on my toes a little. Overall I found this to be a really enjoyable listen and would definitely recomment it. I look forward to Seth's story next. I think Kylie Stewart and Eric Rolon did a really good job with the narration and found them enjoyable to listen to. #AudiobookObsessionReviewer

This story starts out crazy. What mother sells her own daughter. This was one drama packed story. This is the first book I have listened to by Kimberly Knight. It wont be the last.

The narrator was amazing. She is new to me. I cant wait to listen to her in more books.

While you can read Tequila & Lace without having read Angels & Whiskey, this isn't exactly a standalone. While it ends with an HEA, there are major elements of the storyline that continue into Champagne & Handcuffs.

This is actually a duet narration by Kylie Stewart & Eric Rolon. They both do a great job bringing the story to life, especially the scene with the drunken rant. The duet narration was well edited so that the voices blended together well.

HOT & FIRERY Chemistry, Which Led To An EXPLOSION

This was my first book I've listened to by Kimberly Knight but it definitely won't be my last, you can bet your bottom dollar. This started with EXPLOSIVE Beginning. What mother could ever set her 17 year old daughter up like this mother did, I would like to meet her in a dark alley or be hung out for the crows. I'm not going to give out any spoilers.

I'm just going tell you to listen very closely from start to the cliffhanger so you don't miss anything. I will need to go back and listen to Book 1, "Angels and Whiskey." This has been another EXPLOSIVE book of my 2020. Kimberly, you did it for me girl. You show me there are many ways to take something so terrible and to make it a WINNER and that you did here with "Tequila and Lace, Book 2" of your Series, "Saddles and Racks."

Kylie Stewart is a new narrator for me too. I LOVED her in "Tequila and Lace." She Shined BRIGHT and think this was PERFECT for her. I definitely rate both; author and narrator, 5-⭐⭐⭐⭐⭐ Well written book and very well narrated storytelling!!!

This book surprised me. It was so not what I expected. The story reeled me in and kept me engaged the whole time. There were some parts that broke my heart but others that I just adored. I would definitely recommend this book. 🎧AudiobookObsession

Jocelyn’s mother sold her virginity when she turned 17. She ran and never looked back.

Paul’s high school sweetheart broke his heart. He ran as well and never looked back.

12 years later, they meet when both are working in Vegas. He, as himself , and her as Andi, his new roommate. She has never told anyone what her mother did. He’s never shared with anyone else what happened with his high school girlfriend. As the spend time together, they learn about each other and learn to trust each other.

Will he be able to forgive her for her omissions? Will she trust Paul enough to share with him?

Kimberly Knight has written a good book, the story line is clear and makes you want to know what next.

Kylie Stewart and Eric Rollon were excellent Roth the narration! (I apologize if the spelling of Eric’s name is wrong.. he’s not listed in the credits I can see, so I’m not positive on the spelling).

Book one in the series set the bar pretty high, but I think book two held its own. I really love the characters, the set up, the background. Its such an important and relevant topic to surround this romance with, it’s a nice mix between fun/suspense, romance/kicking ass. Kylie Stewart was new to me before this series, but did such a great audio performance.

Dealing with her past, Jos finds a future

After the events of her seventeenth birthday, Jos runs to Seth.Seth is a police officer and Jos follows his lead after losing her family. but when her past creeps into her present, can Jos deal with the pain to focus on her job. The flashbacks gave such an indepth background to Jos and her state of mind. I felt as if I was right there with her. Jos has to face her past in order to save many women from the same thing that happened to her. While undercover, she meets Paul and they begin to fall for each other. But will their relationship make it through when the truth comes out? You want to read to find out. This is one suspenseful romance NOT to miss.

Kylie Stewart narrated this story wonderfully. I really liked that it was just Kylie narrating this story because most of it was from Jos's point of view. Kylie's narration of the male characters was smooth and transitioned well to and from Eric Rolon. KYlie brought this story to life. I hope to hear more from Kylie Stewart.

Wow. This book hits on relevant situations. I loved that the characters were able to come so far after such horrific beginnings. Wow. Kimberly Knight and Kylie Stewart make a great team. I enjoyed the dialogue a lot. Looking forward to more stories in this series.

When I star eyed listening to this book, I had no idea what I was in for, it was good and unexpected I didn’t predict anything happening the way it did.

The narration was great I loved the back and forth between the narrators.

Can’t wait to listen to the next book.

Both Kylie and Eric gives these characters such great personalities. Very enjoyable storyline with a line of gritty determination from the leading lady. I love a good survivor book.
#audiobookobsessionreviewer