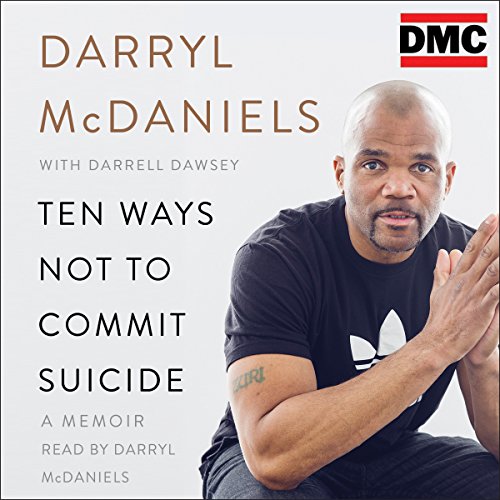 Ten Ways Not to Commit Suicide

In this surprising and moving memoir, the legendary rap star and cofounder of Run DMC keeps it a hundred percent, speaking out about his battle with depression and overcoming suicidal thoughts - one of the most devastating yet little known health issues plaguing the black community today.

As one-third of the legendary rap group Run DMC, Darryl "DMC" McDaniels - aka Legendary MC, The Devastating Mic Controller, and the King of Rock - had it all: talent, money, fame, prestige. While hitting number one on the Billboard charts was exhilarating, the group's success soon became overwhelming. A creative guy who enjoyed being at home alone or with his family, DMC turned to alcohol to numb himself, a retreat that became an addiction.

For years he went through the motions. But in 1997, when intoxication could no longer keep the pain at bay, he plunged into severe depression and became suicidal. He wasn't alone. During the same period, suicide became the number-three leading cause of death among black people - a health crisis that continues to this day.

In this riveting memoir, DMC speaks openly about his emotional and psychological struggles and the impact on his life and addresses the many reasons that led him - and thousands of others - to consider suicide. Some of the factors include not being true to who you are; feelings of loneliness, isolation, and alienation; and a lack of understanding and support from friends and family when it's needed most. He also provides essential information on resources for getting help. Revealing how even the most successful people can suffer from depression, DMC offers inspiration for everyone in pain - information and insight that he hopes can help save lives.

Featured Article: The Best Audiobooks to Help You Cope with Depression


Sometimes when the world feels like too much, it can be helpful to listen to an audiobook that explores similar feelings. Maybe you're looking for a first-person narrative about struggling with or recovering from depression, or maybe you just need a fiction title featuring characters with whom you can relate. Here are a few of the best books on depression—but before you dive in, please be aware that the subject matter might be triggering for some people.

What listeners say about Ten Ways Not to Commit Suicide

Really liked his honesty. Also liked that he narrated this himself. It made it very real and honest. Smart guy who had issues and he persevered to find himself his true self. I love the bonus track love the rock and the rap mixed.

DMC at his rawest

Must have for any Run DMC fan or anyone going through some crap. D tells it straight and hits a few things straight on. This book helped me more than I thought it would and I’ve got two new songs to listen to (one a hidden track!).

It’s a bit short but hits the spot for people who need that extra help getting clarity. Well worth the price of admission.

I loved this book, D you are my brother thank you

loved it it was so inspirational, I really feel like I'm ready to take on the world;

Everyone needs to listen/read this.

Everyone should listen/read this, if not for yourself but for someone you love going through difficulties. I plan on having several people close to me listen to this and hope it will help them deal with what they are going through.

The story is interesting however the jumping of events at times makes it harder to follow. It's obvious the overall pain that Darrel. Went through and there are points that could be helpful but overall ir needs more fine tuning

What did you love best about Ten Ways Not to Commit Suicide?

I loved the fact that he is so honest and able to learn from his mistakes...and I love that he found love in his wife and son.

I can tell you who my least favorite character is...."Rev Run."

Not quite. I give those books 5 stars.

Good solid memoir here. Worth a read for sure.

Great Book.. Been a Fan of Run Dmc for years learnt a lot of things I was unaware of.
Well worth a listen