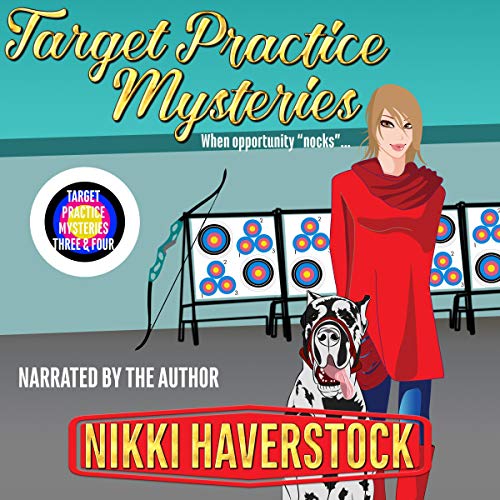 Books three and four in a series set at the fictional Westmound Center for Competitive Shooting Sports in rural Wyoming. The series includes competitive archery, a Great Dane named Moo, and lots of murder.

Death at the Trade Show

When Di grabs a last-minute invite to a trade show, she discovers a surprise: a dead body at the host hotel.

The Outdoor Industry Trade Show has vendors from archery and firearm companies, a 30-foot tall foam yeti named Karma, and at least one killer. Di, roommate Mary, and Great Dane Moo will have to discover who killed hunting personality Cash and why. But digging into the cutthroat world of outdoor TV shows means the hunter can become the hunted.

Di is competing in her first tournament of the competition season, but an annoying coach is distracting her and every archer around her.

When he is found dead of a heart attack brought on by Taser, then Di, Liam, and Great Dane Moo hatch a clever plan to discover which of the many suspects with motive and opportunity helped the coach shuffle off his mortal coil.

A humorous and clean cozy mystery for every sleuth in the family.