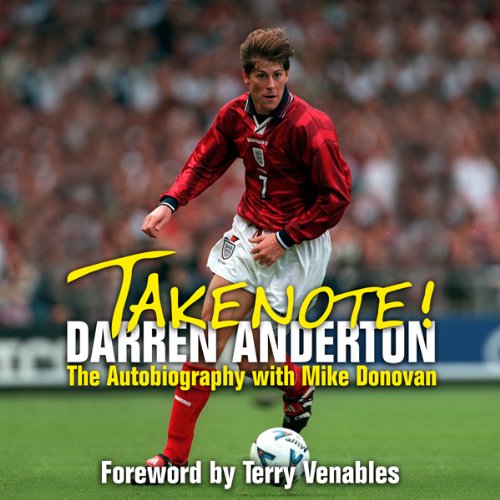 By: Darren Anderton,Mike Donovan
Narrated by: Bob Sinfield
Try for $0.00

This is a truthful and enlightening biography, told from the heart.

It includes new revelations, which will shock and intrigue fans. It features high-quality full-colour photos. Darren Anderton's story is of a kid who grows up to live the dream of being a professional footballer at the highest level. He shines for his country in major finals, develops a reserved 'Mr Nice Guy' image and gets labelled 'Sicknote', with the public viewing him as injury prone, despite the fact he makes over 500 appearances in a distinguished playing career, largely among the elite. Anderton appreciates how lucky he has been to cash in on doing something he loves and enjoys sharing his good fortune with family and close friends. But he goes through personal trauma as the condition of his beloved father, a shining light during his career and life, deteriorates through emphysema, while he and his positive-thinking fiancée Katie deal with her cystic fibrosis, a chronic, progressive disease. He keeps his own counsel through it all. But his retirement as a player and the death of his father three months apart - the tale which starts Takenote! - prompts him to open his heart and put the record straight.

Anderton gives untold behind-the-scenes insights into his public and private life which touch every raw emotion. In this compelling book he reveals: the heaven-to-hell-and-back journey with England, including European Championships and World Cup, Tottenham Hotspur, Birmingham, Wolverhampton Wanderers and Bournemouth. How it enables him to play in the biggest football tournament since England won the 1966 World Cup and to cross paths - and sometimes swords - with a few of the game's biggest names.

The list includes Terry Venables, his biggest top-flight influence, Glenn Hoddle, Ossie Ardiles, Kevin Keegan, Sven Goran-Eriksson, David Beckham, Paul Gascoigne, Ronaldo, Alan Ball, Daniel Levy and Lord Alan Sugar. How he came to turn down Alex Ferguson's offer to join Manchester United. His dismay at a being given a short 'thank you for your services' note - which included being told his contract was not being renewed - from Tottenham after 12 years loyalty. How he overcame lack of self-esteem to become a world-class performer. And a whole lot more.

This is the real Darren Anderton. If you think of him as Sicknote you will have to Takenote! This audio edition contains an added bonus in the form of a new interview with the man himself, taking in many aspects of his varied sporting career.

What listeners say about Takenote!

Strange, from the outset Anderton states he doesn't want to be known as a sicknote, but then spends 90% of book highlighting the fact he was injured for long periods of time.
The gentlemen reading the book should really have taken time to learn the pronunciation of players surnames. I understand foreign footballers have difficult to pronounce but Paul Scholes ?? Shoals? ? lol made me laugh.
All in all a pretty bog standard listen, the only thing I learnt was Anderton couldn't stand up for himself and then blamed the physios for being incompetent.

The most annoying thing about this book is the narration. Not being Darren, but a man sounding old enough to be his dad is bad enough. Worse still is the fact he can't pronounce half the footballers names or Football teams he mentions - it sounds like someone who has never even watch a game of football in his life. The story is also obviously padded out with lots of useless/boring facts. I endured listening to the book to at least get some interesting information from it, but by the end of it my impression of Darren Anderton was that he was a bit arrogent and big headed and everyone in his career was wrong and he was always right. It got painful by the end, listening to him throw his toys out of the pram when things didn't go his way.