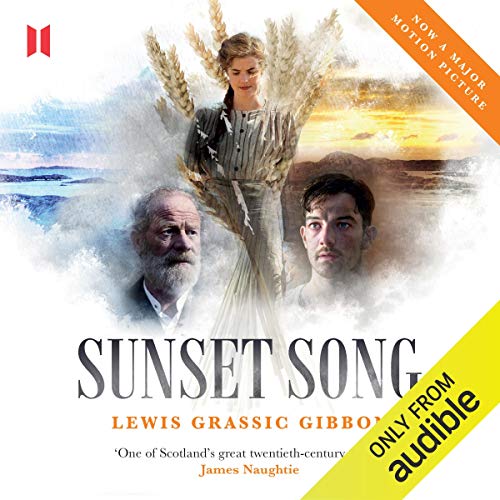 By: Lewis Gibbon
Narrated by: Eileen McCallum
Try for $0.00

The most acclaimed Scottish novel of all time, Sunset Song is a powerful portrait of a land and people in turmoil, seen through the life and struggles of its heroine, Chris Guthrie.

In the years up to and beyond the First World War, Chris' resilience, like the land itself, endures despite everything and is portrayed with a lyrical intensity that echoes through the years and still resonates today.

What listeners say about Sunset Song

This book was AMAZING and is being added to my all-time favorites list.

My wife and I are heading back to Scotland this year and I wanted to read something Scottish so I went to the 'ol Google, searched for “best Scottish novels”, and chose Sunset Song off the list. Win! .

Sunset Song was published in 1932, and the primary storyline takes place in the years 1911 to 1919. It is set almost entirely in a very small, fictional Scottish town called Kinraddie, only a few square miles in size. Kinraddie is located just off the North Sea, north of the Kingdom of Fife, south of Aberdeen and west of Stonehaven. I visited St. Andrews and a couple small fishing towns in the Kingdom of Fife in 2015 and I could picture what Kinraddie would be like in my mind. Since the entire story takes place in a small area, the natural landmarks, buildings, paths, roads, pastures, etc., all play important parts in the book and the ten homesteads and geography of Kinraddie are described in detail in the first chapter of the book to give you a mental picture of where you will be spending the next ten hours.

The book is read, actually performed, by Scottish actress Eileen McCallum. This is probably the best narration I’ve ever experienced in an audiobook. She makes every character come alive and brings life to the Scottish words and colorful language found throughout. She sings the songs the characters sing to each other and a couple songs from a wedding and this adds so much to the audio version of the book over just reading the lines in the paper version. Speaking of the paper version, after so many words befuddled me in the first chapter I bought a paper copy as it contained a map of Kinraddie and an eight-page glossary of the Scottish words used. According to the notes at the end of the book, the author reluctantly allowed the glossary to be included in the United States edition "should the context refuse to give up the meaning of a Scots word used" and he hoped it would be used seldom as to not break up the flow of the book. The author was also quoted as saying that his aim was, “to mould the rhythms and cadences of Scots spoken speech and to inject in to the English vocabulary such minimum number of words from Braid Scots as that remodeling requires.” The language gives this book an unique and enjoyable personality the likes of which I’ve rarely, if ever, experienced before.

Sunset Song starts by describing the history of the Kinraddie area, going all the way back to the 12th century and about thirty minutes later you are fully familiarized with the main inhabitants of the town as of 1911 when the narrative of the main storyline begins. The primary characters are fully fleshed out in this informative introduction so that you feel you know exactly what they look like, where they came from, and what their personalities were like. You even know how the gents styled their mousers.

The plot of the story begins to move forward in the second chapter when we are introduced to the Guthries, who move to Kiradde after the lease on their farm in Echt is not renewed. The Guthries become the major characters of the novel, with most of the rest of the novel told from eldest daughter Chris Guthrie’s perspective. The rest of the novel is absorbing and a joy to listen to. We laughed, we cried, and laughed some more. You feel like you know the residents of Kinraddie and feel their joys and pains as they go through life and are affected by the political and economic factors of the day, and eventually World War One.

Sunset Song is an absolute masterpiece. The cover of my paper book boasts that it was voted the "Best Scottish Book of All Time”. I can't speak for other Scottish books but I'm with the voters on this one. I can’t recommend the audiobook highly enough. Twenty stars.

Gibbon's poetic language spoken in McCallum's appropriately thick accent combine to require closer attention, but oh, so worth it! Gibbon tells an honestly realistic tale in words that make it beautiful.

Good book for learning about the land and its authors

I am going to Scotland and wanted to get in the spirit. This was a good one to give me a sense of the people, land and history. The narrator made the story come alive, with her authentic accent being both a pro and con. I enjoyed her accent and the colloquialisms of the Scottish but at the same time found it difficult to understand, especially when she was speaking quickly. I may have to get the written book to study and decipher some of the language. Would recommend!

A very fine book and surely a Scottish classic

Beautifully and evocatively read and very moving. Such a lyrical description of place and a culture no more.

Could not go pass Chapter 5

This was the first time I read/listen to a book by Lewis Gibbons. I first down loaded the audiobook, then I get the hard copy from the library. Due to a lightning strike, I need to read and hear the books in order to remember what has happened in the book. This is the first book I had trouble understanding the Narrator, the story or what exactly was going on in the book. I tried just reading thinking it was the narrator's Irish /Scottish accent, but when I I began reading It still made no sense to me. There seem to be no plot. I tried to return the book to Audible, but since it took me so long to actually give up on this book It was too late to return it.

I can't say enough about this recording of a Scots masterpiece. The reader's accent was very similar to that of my Granny from Ulster which added to the appral, though perhaps out might take some work for most Americans.

What a treat to hear this. Perhaps my first north east story. I look forward to seeing the show now. Thank you.

Brought up in Aberdeenshire I hear the voices of my ancestors given life by Eileen McCallum. What a skill she has in bringing out the beauty, poetry and pain of these words. She speaks the language of the Mearns.

How can she be persuaded to read the remaining two books of the trilogy? I feel we owe it to the next generations to have these books read in the authentic voice by someone who understands the people and can act as a bridge between that world and this.

Wonderfully read in a convincing accent.

Fantastic narration. I've read Sunset Song many times and will never tire of it. Eileen McCallum's voice is perfect and added so much to an already firm favourite of mine. I'm looking forward to listening again.

We chose to listen to this during our drive around Scotland.. having never heard of the book before!! We absolutely loved the book.. the story, writing and the reading.. thoroughly recommend it to anyone with an interest in Scotland

Perfect Narration of the Perfect Book

Forget the recent disappointing film version, this reading by Eileen MacCallum is definitive. She captures the accent, the humour and the profound humanity of Lewis Grassic Gibbon’s masterpiece.
I know that she also recorded the other two books in the trilogy, Cloud Howe and Grey Granite, at the same time as this version was made for Canongate back in the days of cassette tapes. Please release them as well. The digital works deserve to share the complete delights of A Scots Quair Trilogy - probably the best Scottish fiction ever written.

A perfect narration of a timeless story.

I loved this. It’s a book I know well, and there were times where I felt I was hearing the story for the first time, and from a friend.
PLEASE record the rest of the Quair!

Fabulous narration that brings the story to life so well. This is a book that few people could narrate and do justice to the language and Eileen McCallum is quite simply superb.

This is the best book I have listened to by a country mile. Eileen McCallum’s narration brings the story to life so well, I felt I was living alongside Chris! Knowing the area the book is set in, makes me embarrassed to think it has taken me over 40 years to ‘read’ it. Would highly recommend.

Beautifully written and read. Almost unbearably sad and intense as the story of a Scottish community in the era up to and including World War 2 unfolds.

no wonder this is voted as the best Scottish book!

I loved every second of it. Evocative of time and place, full of local colour and wonderful characters.