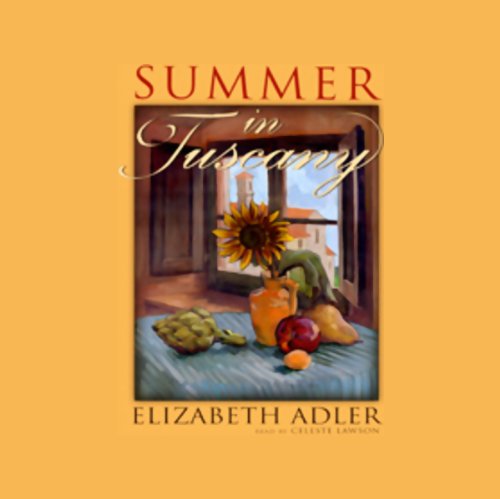 By: Elizabeth Adler
Narrated by: Celeste Lawson
Try for $0.00

Gemma Jericho is an overworked New York doctor with a handful of a teenaged daughter and a mother who worries that Gemma has no life. So when her mother receives a mysterious letter telling her about an even more mysterious inheritance in Tuscany, Gemma sees her chance. The three of them throw caution and convention to the wind and leave for Italy. Gemma hopes that a change of scenery will bring back the closeness she used to share with her daughter. And perhaps the challenges of living in a foreign country will give her mother something to worry about beyond Gemma's social life.

But what they encounter in Tuscany is far more distracting than Gemma expected: a crumbling old villa and a town divided. Half the residents believe that Ben Raphael, another American, is the rightful inheritor of the villa. As cultures clash, gossip soars and intrigue unfolds. Gemma is caught up in the most disturbing and delicious trouble she's ever had. And her summer in Tuscany will change her outlook and her life forever.

"The audio medium is probably the best way to absorb this collection....Valuable and well-performed." (Publishers Weekly)

What listeners say about Summer in Tuscany

Somehow I was expecting "Under the Tuscan Sun," and instead got a shallow, predictable, cliche-ridden romance novel, read aloud in a grating, irritating voice. I tried to stick with this novel, hoping it would lead somewhere other than down this sorry path, but I finally gave up before the end of Part One; I decided I had better ways to spend my time.

I tried to get through it, put it down and downloaded the second half after several months. What a piece of junk. The reader was extremely irritating, and the plot was ridiculous. It sounded like the author read a few travel books, then churned out this weightless drivel. This is no better than a Harlequin Romance.

"The greatest thief is a terrible book," and this one robbed me blind. I was expecting something, anything, and all I got was a ridiculous waste of a read. Don't bother.

The reader has a grating and irritating voice. Disappointing.

A delightful 'read'. I swear I could smell the air, taste the food; and now I want to pack my bags, say 'ciao', and head for Tuscany. I delighted in the small comical turns that Gemma encountered; and I think I've met her mother at least once.

Celeste Lawson's reading of this book is graceful and charming. And now I want more Elizabeth Adler books!

Loved the book, but the narrator was a little on the annoying side. Sorry to be so negative.

Droning monotonous narration ruined it for me

The least of my favorites by this author due to the dreadful narration. What could have been a great story became almost intolerably boring. Very sad.

The imagery in this book is fabulous. It brings back my memories of Tuscany, where I fell in love with my Prince Charming.
It’s a lovely tale and I hope you enjoy.

I thought this was a very good book. Do not listen to the other people who wrote bad reviews apparently they don’t know what they’re talking about. I liked that it kept you intrigued throughout the whole book. He gave you little snippets about cash but you don’t find out what happens till late in the book. Makes you want to keep reading just to find out what happens.

I always feel bad giving a mediocre rating on anything because what we like/don’t like is so subjective. This was a bit of a disappointment for me. I felt like it had so much potential. I glazed over a lot of it because it just didn’t have enough substance…not that I was looking for the great American novel or anything. But I like when I can connect with some of the characters or the story but this didn’t do it for me. I kept with it because it had some decent moments that kept me from giving up on it. The fact that it was included in my membership was good. If I had used a credit I would have been mad lol.