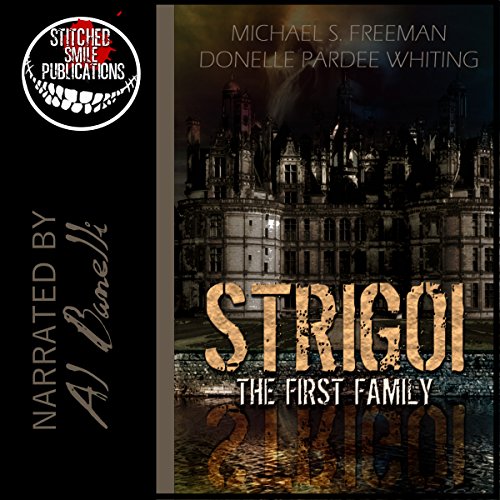 Not all monsters are made. Some are born. And sometimes, history gets it wrong.

A freelance writer is invited to an elderly man's home to witness his telling of the family history to his sons. The patriarch's reason for requesting a stranger into his home as he shares his tale is a simple one. He wants the young man to write the true history of Family Dracul, to trace the lineage back to the very first member of a family cursed. But, the old man has another agenda. He wants to warn humanity; what happened in the past was nothing compared to what is to come.

What listeners say about Strigoi

This Bloodline is Strong…

Strigoi sets itself apart from the nonsensical vampire tales that are out there and dives right into the heart of the matter, exploring the bloodline of the first family and tracing their roots throughout history. With this tale, there are no depressed teenagers in love or sparkling chests. The violence is brutal and the sex is erotic. In other words, this is not your daughter’s YA book of the month! (Seriously, this book is not intended for anyone under 18 as the feedings are graphic and the sex is explicit.) With that public service announcement out of the way, let me tell you what I loved about this book.

The majority of the story is a word-of-mouth handing down of the Strigoi family history dating back to around 988 AD and told by an old man to his sons and grandsons. I am a huge fan of vampire folklore and the authors bring about a fine balance between the folklore and actual historical events, each complimenting the other. Freeman and Whiting did their homework here and strategically pieced together fact with a unique blend of fiction that not only captivates the reader, but will have you wondering what is real and what is not. If you know your lore, you’ll love the way notable figures are woven into the story, especially the two most influential historical figures- Vlad the Impaler and Elizabeth Bathory. The book was packed with these historical references that have shaped and molded the vampire lore and it was a delight to have them play such an integral role in the first family’s bloodline. Being the greedy reader that I am, I only wished there had been more of these sprinkled towards the end (here’s to hoping that there is a sequel in the works!). I was also impressed at how they tackled many age-old questions about vampires and kept these answers grounded in reality. For example, I enjoyed how the vampires must learn the difference between killing, converting and/or manipulating a victim. It’s a small detail that goes overlooked in many vampire tales, so I appreciated that the authors addressed it. There are many small details like this one throughout the book that added to the integrity of the story.

As for the narration, Al Benelli brought this story to life with the voice of the old man. His accent was eerie and exactly what I would have pictured if I had read this as opposed to listening to it. He added a notable dimension to the work and did an excellent job. I will definitely keep an eye out for any other works he has narrated going forward.

Strigoi the First Family is how a vampire story should be told and is a must read/listen for the die-hard vampire fan. Can’t wait to see more from Whiting and Freeman!

Would you listen to Strigoi again? Why?

Yes, probably. It's an easy listen at first, but then the plot becomes complex and a bit muddled, with vampires begetting other vampires and I'd probably want to listen at least once more because I'm sure I missed some character connection along the way.

The story line is almost like an eyewitness account of the evolution of the family Dracu... You know that some of it is based on truth and some fiction... making it a "legend" more than a documentary... but the line between what's true and what's not... is very thin and hazy. Is this the real story of the legendary "Impaler", Vlad Dracula? Who knows?

Definitely the old man... Is he 90... or 900 years old? The voice is spooky and the Eastern European accent conjures up images of Bella Lugosi and the original Dracula movies. Not something you want to be listening to if and when you find yourself in a dark, Victorian mansion or anything else that could suffice as a haunted house.

Who was the most memorable character of Strigoi and why?

Again... the old man. The story is primarily a third person narrative... It's the old man telling the story of generations of night walkers as though he were one himself (Spoiler Alert!). The other characters in the room are place holders as the old man describes the events taking place over many prior generations with uncanny clarity. The old man goes into some pretty graphic descriptions as though he were delivering eyewitness testimony. (Spoiler Alert #2).

There's lots of blood, gore and fairly descriptive, hot steamy sex. Not a book for the kiddies!