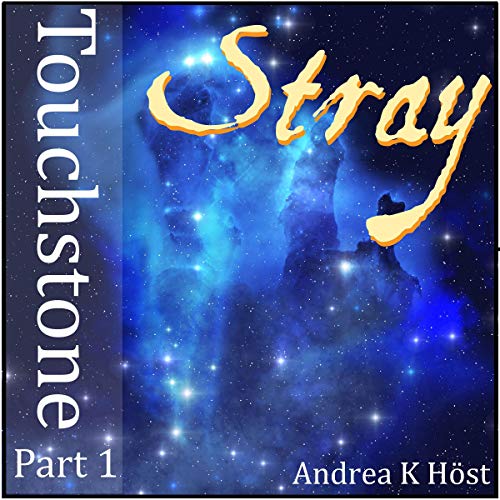 By: Andrea K. Höst
Narrated by: Stephanie Macfie
Try for $0.00

On her last day of high school, Cassandra Devlin walks out of exams and into a forest. Surrounded by the wrong sort of trees and animals never featured in any nature documentary, Cass is only sure of one thing: Alone, she will be lucky to survive.

The sprawl of abandoned, blockish buildings Cass discovers offers her only more puzzles. Where are the people? What is the intoxicating mist that drifts off the buildings in the moonlight? And why does she feel like she's being watched?

Increasingly unnerved, Cass is overjoyed at the arrival of the formidable Setari. Whisked into a world as technologically advanced as the first is primitive, where nanotech computers are grown inside people's skulls, and few have any interest in venturing outside the enormous white stone cities, Cass finds herself processed as a "stray", a refugee displaced by the gates torn between worlds. Struggling with an unfamiliar language and culture, she must adapt to virtual classrooms, friends who can teleport, and the ingrained attitude that strays are backward and slow.

Can Cass ever find her way back home? And after the people of her new world discover her unexpected value, will they be willing to let her leave?

What listeners say about Stray

Glad they had an Australian reading it.

Loved it! Except for the production slip that put the end matter 2/3s through the book instead of the end. Narrator is Australian, which can make it hard to adjust for an American English speaker, but it adds realism to the book and I like it better for it. Sometimes the narrative is rushed, and sometimes too chipper for the situation the main character finds herself in, but overall a good listen.

I read the print book for the first time years ago and was happy to pick this up in Audio.

I have read all 5 books in this series and was thrilled to find the audio book of the first book. I’m looking forward to Lab Rat One in audio.

This book is written in the form of diary entries. I really enjoyed the narration of the book, I think it added depth to the story. Stephanie did a good job of interpreting the story, which would be difficult seeing as it is written in diary entries of the main character, but she was able to give it added depth by representing the other characters with their own “voices.”

The story is about a young woman, Cassandra Devlin who was transported by a wormhole to another world. The world she initially encounters is filled with the ruins of a culture from thousands of years ago. There shevus found by the remnants of the survivors of the original inhabitants of the world that she had been transferred to. The first book describes her introduction into this new culture, with different beliefs and language. It follows her successes and failures as she attempts to navigate this weird world that is so different from her own.

The writing is well done in the manuscript and the audio book follows the book as it was written. It’s nice to hear the voice of “Cass” telling her own story and I like how I’m able to get a firmer grasp of her character through the audio presentation.

I have read this entire series several times and I look forward to the remaining audio books releases. I also hope that the author isn’t finished writing about this world and the people in it. There was a hint about Aunt Sue in In Arcadia that I hope that the author follows up on. I hope that she isn’t finished with the series yet. So I’m a nutshell, I’m waiting anxiously for the next book in audio to be released.

I keep listening to this series over and over again, I can’t wait for the final book to come out! I can’t describe how this book is I’m trying to figure it out so I could put it down in words but it is not happening. The characters are well written the story has a lots of twists and turns, the authors imagination is amazing

More than I could hope for.

It's worth a listen whether you're an old fan or not. Audio version is fantastic!

In love with this book!

No spoilers here. I so love following Cassandra's adventures on her way home from school, I have read the whole series and listened to the first 2 Audibles multiple times! I listen to them on my daily commute as the radio gives me mostly commercials for the short 15 minutes. Andrea K Host is an engaging author whose stories never get old.

So glad this is available on audio!

I've been waiting for this series to come to audio. Love the storyline, and can't wait for the rest of the books.

Please make the final part of the trilogy “Caszandra” available in the UK. It’s ridiculous to make only the first two parts of a trilogy available for purchase

A detailed adventure in several new worlds with psychic space ninjas and a ghost cat.
I have the printed versions and love them. Was very hesitant to get the audio versions just in case ruined books. They didn’t, thankfully Aussie narrator. Slight warning she does go at a pace so I ended up listening at 0.8 speed.
Found the summary of the novel at the beginning unnecessary.
Could we please have the Gratuitous Epilogue too?

A promising story, spoilt by the narration

I found this story interesting in concept and development. Firmly set in the Sci-Fi/Fantasy genre, it features an 18 year-old girl who suddenly finds herself transported to an alien world through an unexpected "wormhole" in the fabric of space apparently through no-one's intervention. She is eventually rescued by another species of humans and over time starts to identify with them and adopt their self-chosen role of protecting the various worlds from various malevolent non-human species. Her gradual transition and growing awareness of her unique qualities as a person are well presented and interesting to follow. Cassandra is developing into a very worthwhile person to know. It is the narration that lets the story down. It is quite obvious that the narrator is just reading the story, with little sense of the drama and various characters involved. The story is continuously rushed (you are struggling to identify paragraphs, and sometimes even sentences), and chapter/section headings are barely recognizable until they are well past. The narrator's accent is decent Australian, which fits the story nicely, but I question whether Australians really say "zee" for "zed", "levver" instead of "lee-ver", and various other mis-pronunciations. Her pronunciation of "Gamgee" from The Lord of the Rings trilogy is quite unique - she obviously hasn't watched the films for some time, or listened to any of the audiobooks. Despite the narrator's poor efforts, I will be following the story over the next two books - I want to follow Cassandra's story to hopefully a fulfilling end.

Last chapter and back matter out of order

The last chapter is positioned after the back matter in the audio book, i.e. chapter12 should be before chapter 10.

I Stray away from reviews

Stray starts off a bit slow, the first couple of chapters are building the world and how Cassandra (turn into Bear Grylls and) survives in the wild on Muina. Then the Setari (aka good looking mutants that belong in Xavier's School for Gifted Youngsters) arrive and this is where the story pick up, while Cass is with the Setari they begin treating her like a lab rat (Cass’ words) and install a Nanotech computer (Now the Nanotech computer they install into Cass sign me up I want one) Eventually find out she can enhance their abilities. After the discovery of Cass plans to help find earth are put in motion
Stray main focus is about Cassandra accidental discovery of the new world and the new worlds discovery of her, Cass’ new abilities (new to her and them) and finding her way home. Compared to other YA fantasy I have been reading Stray doesn't focus on romance though there is a possibility for it in the next couple of books (slow build romance maybe).
Book cover - I really like the 2017 cover just wanted to put that in haha

Audiobook:
-First thought listening to the Audiobook - My own accent sounds funny but that might just be because I mainly listen to American Narrators
- I'm unsure if its just the edit of the audio or if there are sections that were re recorded but some parts sound different (its the character voices that I'm talking about)
(The glossary and Character list is placed before the last two audiobook chapters so just got to skip about 5min unless that been fixed then ignore this)

so fun to have an audiobook version of this series

this is a comfort read I come back to again and again. great to now be able to have an audio version (and learn I've been saying so many Taren/Muinan names abd words incorrectly all this time!).