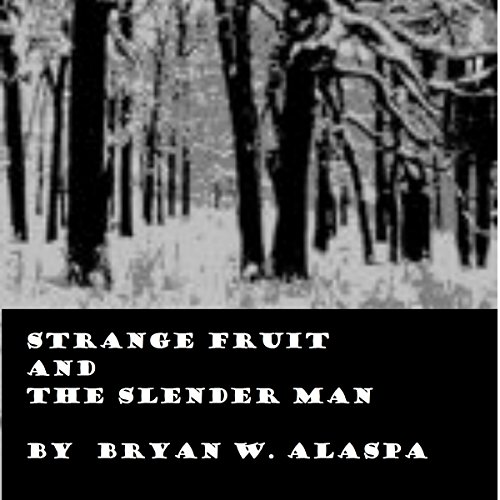 Strange Fruit and the Slender Man

Strange Fruit and the Slender Man

By: Bryan Alaspa
Narrated by: Scott Odell
Free with a 30-day trial

Chicago, 1957. Two sisters, the Haines sisters, have gone missing and the entire city is in an uproar. As word of their disappearance spreads across the country, two police detectives are assigned the arduous tasks of finding them alive or bringing their bodies home. However, as the two hardened cops begin to investigate, they soon find that things are not as cut and dry as they thought. This is not a simple kidnapping. Something ancient, primal, and utterly terrifying is at work here and nothing that they have ever known will ever be the same again. Something has lured them into a terrifying trap that will destroy their minds, take their souls, and leave the rest of the world baffled.

What listeners say about Strange Fruit and the Slender Man

I enjoyed this short story very much. What starts out like a hardboiled detective story gingerly weaves into a supernatural horror story that was for me one of the most original stories heard in a long time. Scott Odell's performance was great. This was my first Bryan Alaspa story, but it won't be the last.

excellent story from a simple creepypasta

honestly was quit thrilled to see a good story with the slenderman as there haven't been enough good storys on him, narration was brilliant pace was good, and the lore was well utilised.