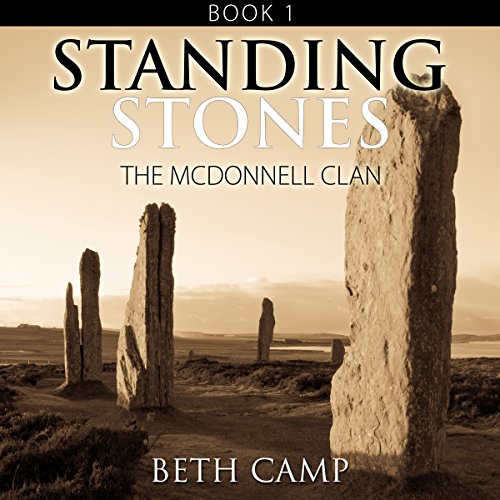 In 19th-century northern Scotland, Mac McDonnell's traditional way of life is challenged when Lord Gordon lays claim to their island home and threatens to replace farmers and fishermen with sheep. Mac leads a protest, but when evictions turn violent, Mac must decide what he is willing to risk - to protect his family, his sweetheart, Deidre, and his livelihood. Set during the time of the Clearances, Standing Stones won an award for historical fiction and was dubbed "a very promising work" by the Pacific Northwest Writers Association.

Mixing the pathos of poor fishermen with the triumphs of lov!

Mixing the pathos of poor fishermen with the triumphs of love brings dignity of the poor and triumph of the human spirit! The MacDonalds were the most respected members of their tiny fishing village. They were a warm, caring, family!but they made them the chosen. I thoroughly enjoyed this book and hope for a sequel. It was a page-turner. I recommend.

I would've liked a family tree in the Kindle edition. I had trouble keeping track of how the characters were related or romantically linked. This is even harder in an audiobook when you can't easily flip back.

Would you be willing to try another book from Beth Camp? Why or why not?

Yes. She's magnificent at setting, at recreating the daily lives or her characters, whether they're fishing or in prison.

Would you be willing to try another one of Darryl Hughes Kurylo’s performances?

Maybe. He mispronounced Edinburgh, and the falsetto voice he used for many of the female characters bordered on comical. I do think he improved as the recording went on, as if he gained confidence.

Absolutely. It would be a lovely film, or terrible in the terrible parts!

I liked the way Beth gave us the perspective of Lord Gordon and especially his wife Alice, whom I liked, as well as the Scottish tenants.