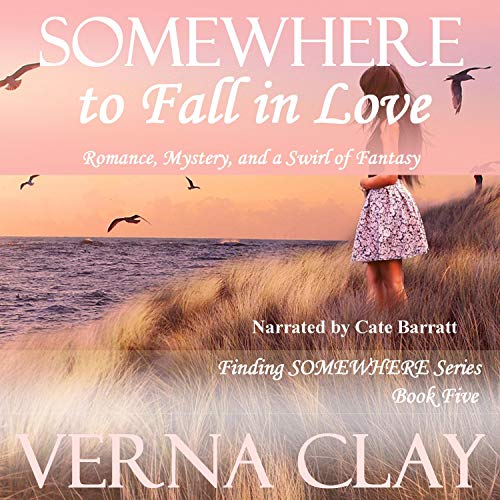 Somewhere to Fall in Love

By: Verna Clay
Narrated by: Cate Barratt
Try for $0.00

Nestled in a cove on Oregon's coastline, the town of Somewhere is charming, picturesque, inhabited by townsfolk who love their community - and teeming with mystery. You are invited to join the heroes and heroines of Somewhere as they solve mysteries, discover romance, experience inexplicable phenomena, and fight injustice - just the usual stuff!

Somewhere to Fall in Love

Is there somewhere the edges of reality and fantasy overlap?

Saul Flanahan, a physically challenged young man, has lived an off-grid, solitary life with his parents, and for as long as he can remember he has enjoyed their tales about mermen and mermaids inhabiting the oceans. As a child he believed their stories, but now in his mid-twenties, he indulges their whimsical proclivities because of his love for them. However, when a beautiful young woman "supposedly" washes ashore and claims to be the Princess of the Pacific, he is sure that his parents have hired a consummate actress. As to their motive, he hasn't a clue.

Raymond Johnson, III, decides to expand his non-profit veteran's organization headquartered in Portland, Oregon, to the charming and friendly coastal town of Somewhere, the birthplace of his deceased grandfather. While dining at Mama Pink's, the most popular eatery in town, he meets a cute, but clumsy waitress named Suzy, who trips and dumps his order in his lap. Rather than berate her, however, he hires her as his personal assistant. When Raymond meets Suzy's grandmother, he is confronted by a mystery involving his grandfather. Soon Raymond and Suzy are trying to piece together the senior Raymond's reason for leaving Somewhere in 1950.

What listeners say about Somewhere to Fall in Love