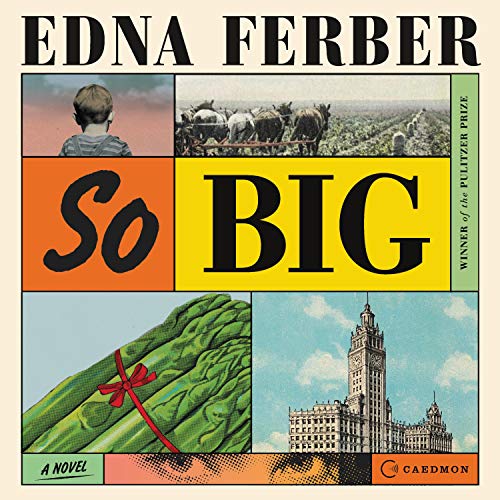 By: Edna Ferber
Narrated by: Cassandra Campbell
Try for $0.00

Winner of the Pulitzer Prize and widely considered to be Edna Ferber’s greatest achievement, So Big is a classic novel of turn-of-the-century Chicago.

Hailed as a novel “to read and remember” (New York Times), So Big is the unforgettable story of the indomitable Selina Peake DeJong and her struggles to stay afloat and maintain her dignity in the face of a challenging marriage, widowhood, and single parenthood. First published in 1924, So Big is a brilliant literary masterwork from one of the 20th century's most accomplished and admired writers and still resonates today with its unflinching views of poverty, sexism, and the drive for success.

Featured Article: The Greatest, Most Notable American Writers of All Time


To curate a list of famous American writers who are also considered among the best American authors, a few things count: current ratings for their works, their particular time periods in history, critical reception, their prevalence in the 21st century, and yes, the awards they won. Many of these authors are taught in school today, and hopefully, several more of them will be taught in school in the near future.

What listeners say about So Big

History of Chicago via One Family

Are you from Chicago? Do you love Chicago? Then, yes, you should listen to this book. Beautifully written with detailed language and references you’ll connect with, the story of this mother and son acts as the catalyst for listeners’ journey through an emerging great city. Poignant truths about is meaningful in line and what ultimately draws us together in relationships, Ferber’s novel had me from the opening line, throughout the saga, and pleased with its resolution.

of course to remove a novel from the Zeitgeist in which it was written is a mistake. nevertheless the author's treatment of race comes across as ham handed. her description of black neighborhoods "spreading ominously" and her description of a " correct Jap servant," come across as equally quaint and small-minded. more damning, is that her portrayal of men is ludicrously superficial. from her description of Dirk and Rolf as young boys who are little more than pet animals to her portrayal of Dirk as an adult who is little more than a marionette in the hands of his female controllers and the economy at Large.

finally, the main character Selena gets to have it both ways: she is successful in business while still pursuing romantic notions of art and beauty. she never makes a wrong decision – not one time - in the entire novel. the entire book comes across as a heroine tale written for young girls.

overall, however, the writing is more than satisfactory and the narrator lends distinctive accents to Dutch farmers and other recent immigrants to the US in the 1890s.