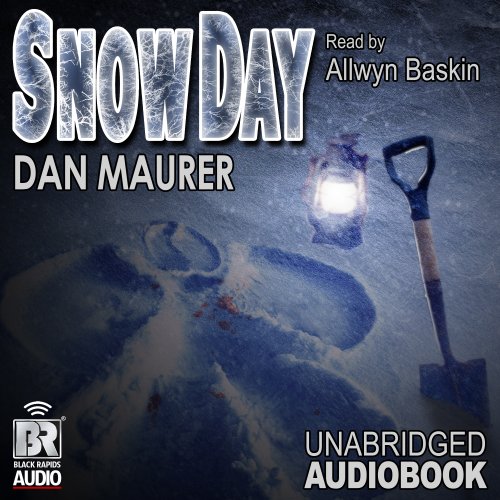 A Novella
By: Dan Maurer
Narrated by: Allwyn Baskin
Length: 3 hrs and 5 mins
Categories: Fiction, Horror
4 out of 5 stars 3.9 (9 ratings)

It happens each winter, and has for over 35 years. Every time the snow starts to fall late in the evening before a school day, the dreams begin again for Billy Stone. They are always the same - there's a dark tunnel, and there's blood, lots of blood, and someone is screaming.

Black Rapids Audio, and award-winning actor Allwyn Baskin, bring a chilling excitement to Dan Maurer's horror novella, Snow Day. Baskin, in an engaging and nuanced performance, recounts Billy Stone's childhood tale set in 1975. On that day, Billy and his friends played carefree in the snow, until an adventure gone awry left him far from home, staring death in the face, and running from a killer bent on keeping a horrible secret.

Set in a time before Amber Alerts, when horror stories were told around camp fires instead of on the nightly news, Snow Day is a blend of nostalgia and nightmare that makes us question if the good old days were really as good as we remember.

From a new voice in dark fiction comes a thriller about an idyllic childhood turned horrifying, a cautionary tale about how losing sight of the difference between feeling safe and being safe can lead to deadly consequences.

About the Narrator: Allwyn Baskin, an award-winning actor based in New Jersey, has appeared in a variety of musicals, comedies and dramas. He has performed voice-overs for commercials and public service announcements and brings a natural, engaging style to his work. In addition to his great love for the spoken word, he is also an interpreter of American Sign Language and received his theatrical interpreting training from the Julliard School. Snow Day is his third collaboration with author Dan Maurer.

About the Author: Dan Maurer is an independent author, publisher, theater producer, director, and digital marketer. Dan is a member of an acclaimed New Jersey theater company and has won awards for his producing, directing and sound design. He lives with his wife and their daughter in Robbinsville, New Jersey.

Would you consider the audio edition of Snow Day to be better than the print version?

I only listened to the audio book but I think that having the print edition would be good as well. Seems like a good night read.

What was one of the most memorable moments of Snow Day?

There were a few parts that really reminded me of growing up in the Northeast. I also did a lot of the stuff the main character did, minus the dead body and all.

Have you listened to any of Allwyn Baskin’s other performances before? How does this one compare?

Made me think about growing up and protecting my kids.

Great read for teens and adults. Book is very memorable, lots of substance and a great new voice. Looking forward to more from Dan Maurer.

scary, and it will make you think.

liked Snow Day quite a bit. "read" it in two sittings and will "read" it again. not only did it make this 40-year-old a little paranoid of his neighbors, but it made him wonder about his childhood and what might have been lurking there. as for the narrator's performance, at first i found it a little over-the- top but it quickly grew on me and i very much enjoyed it overall.