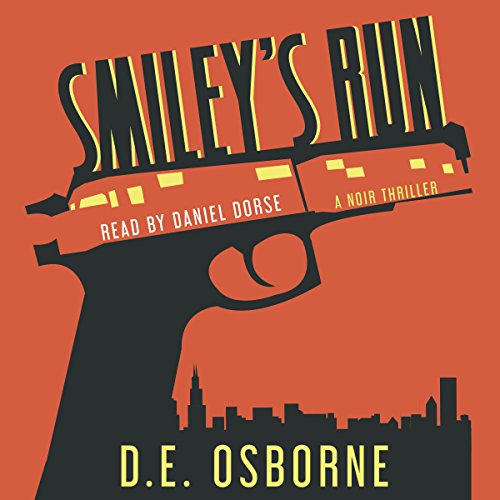 By: D.E. Osborne
Narrated by: Daniel Dorse
Free with a 30-day trial

War is hell, but coming home is worse. Jason Smiley, a cop in Chicago before he joined the Army after 9/11 came back from the wars knowing all the real heroes were dead. Now he's a private detective following trophy wives around LA. A call from his Iraq battle buddy, an undercover FBI agent is the first thing he remembers when he wakes up next to a dead man. The last thing he remembers is the surprised look on the dead man's face as he died, the smell of death and camel shit. Hell of a way to wake up on the day you're supposed to save the world. But first he has to find his clothes.

During an arms deal he brokered for the Mob between Middle Eastern terrorists and the Triads, Jack Nesmith, Smiley's battle-buddy from the war, stole circuits designed to trigger nuclear warheads as IEDs from the Chinese Triads in Los Angeles. Now everyone wants the triggers back. Smiley is coerced by the mob, the FBI and a mysterious redhead to find Jack, but when he does the problem goes from threatening to disastrous in a muzzle flash. Smiley's run to find his battle-buddy and the missing triggers takes him from southern California to the sun-drenched Jamaican shores, back to storm-tossed Chicago, and into the way of powerful ruthless men, with no one he can trust. Not even himself.

What listeners say about Smiley's Run

See publisher's blurb for clues without spoilers, then go out and get the book in the format you like best. It's a great action/adventure/suspense novel with a great cast of characters that grabs your interest and won't let go.
Daniel Dorse isn't a perfect fit for Smiley, but does a fine job nonetheless.
I requested and received a free copy from the publisher, author, or narrator courtesy of AudioBookBOOM, and my opinion of the book is my own.

What made the experience of listening to Smiley's Run the most enjoyable?

Being able to relax and enjoy a story while driving to and from work.

What was one of the most memorable moments of Smiley's Run?

I liked Jack, he seemed to be a few steps ahead of everyone

Not in one sitting but fairly close to it.

A Few Good Guys, A Lot of Bad Guys

A Few Good Guys, A Lot of Bad Guys and you are never sure which is which until the end.
Jason Smiley has a lot of in his past, some good and some bad but all needed as he must work through a cast of characters, that are not always what they appear to be, he world In and effort to save Chicago from a nuclear disaster. Sometime the plot line stretches reality but you still hang in to finish.

stories in this series reveal realistic investigative procedures and the characters are well developed. He stories are well written and readers can easily become drawn strongly into the story line. Highly recommend.“I was voluntarily provided this free review copy audiobook by the author, narrator, or publisher.


A book with many villains, lots of action, and plenty of suspense.


The narration was a bit slow for my taste. I would prefer pacing to match storyline. Otherwise the characters were well portrayed by Daniel Dorse.

I love a book where stuff goes wrong for the hero. It's not everyday that you find an author who has the ability to put real life screw ups in to the book. There were parts of the book where I was yelling CIA or ISI agents!!!! A lot of predictable twists and turns but overall a very solid 4 star book. I can't spoil the book for anyone, the narrator is rough and gruff to match the main character. I feel like he transitioned pretty well and did decent/good with the female voices.

I noticed a few grammatical errors and mismatched vehicle references, the editors did a decent job but missed a decent amount but it didn't take away from the book.

I'm really glad the author of the book provided me this book for review.

Fantastic, this book has it all, action, and drama galore. If you crave entertainment in a Noirish genre this book will fill the bill. So well written. My only disappointment is that the sequel is not up on audible yet. If I had not been provided an evaluation copy of this book, I would have bought one.

You might want to catch this one on sale

I enjoyed the book and I enjoyed the narrator. I am not so sure that I enjoyed the combination of the two together though. To me this book calls to mind a Mike Hammer novel, which I enjoyed very much and the narrator did an excellent job I just had a hard time picturing him as :-). Smiley. I was voluntarily provided a review copy by the author publisher or narrator