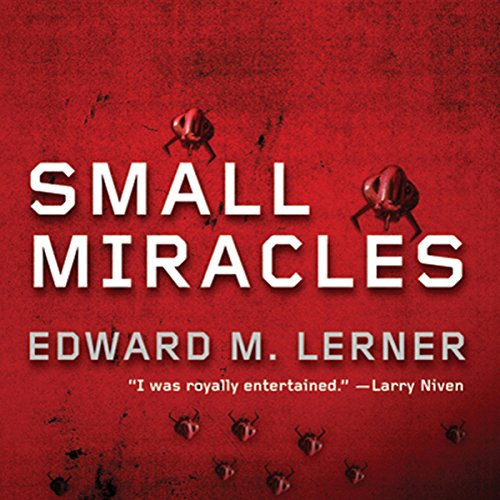 Near-death experience changes a person, so no one is entirely surprised when easy-going Brent turns somber and studious, focused and cold. Not at first. But Kim O’Donnell, Brent’s best friend, cannot get past some of the changes. This just isn’t her friend, and she wonders what’s gotten into him.

With an Army field trial imminent and the company’s future at stake, possible nanotech side effects aren’t something anyone wants to discuss. The bad news is, Kim’s right. Something has gotten into Brent - and he isn’t the only one changing.

This book was extremely well narrated. The story was quite good for Sci Fi of this type-- I enjoyed the evolution of Brent and Kim, the main characters. This is the 2nd Lerner novel I have read-- the first one being Fools Experiment. You have to know what type of book you’re getting into with Mr. Lerner, but if you like that style as I do, the narrator renders the characters in a way that enhances the narrative. Good audible version.

I’m a big fan of the merger of science fiction and technology, futurism and the corporate condition. Edward Lerner offers a fun ride here taking a look at those miraculous suits of Garner Nanotechnology with his protagonist Brent and worthy side kick Kim O'Donnell. This story deserves to be read aloud with its fusion of everyday problems answered by the transformation of physics and biology into medical nanobots capable of doing almost anything. The narrator, Gabriel Sloyer, contributes to the fun with an extremely intelligent performance. I welcomed his characters and many voices, excellent and believable. Smooth hours of great brain candy.

Like a nanobot, the reader is injected immediately into bodies in Small Miracles, both corporeal and non-corporeal. Nanotechnology is probed and prodded, along with the body of Brent Cleary. Up for dissection are the bioethics involved in this revolutionary technology, as well as the problem of how to rein in science gone wild. Cleary is employed by a company attempting to market nano bodywear; that is, a suit designed to shield its wearer from death in the event of major physical injury. While demonstrating the purported invulnerability of this armor, Brent is involved in a catastrophic pipeline explosion that decimates the population around him. He is the lone survivor, ostensibly due to the “ER” nanobots that are engaged to deliver coagulants and keep him in alive in the event of such calamity. Surviving this unplanned test drive has its own perils, however, as Brent is never the same, even though the nanobots that saved his life are theoretically dead and excreted after 24 hours of being activated. Brent's best friend, Kim, notices these changes, and the story propels forward through Brent's dissolution into a maelstrom of abnormal behavior and Kim's efforts to help recover her friend in the face of the One.
Small Miracles was my first foray into science fiction after a lengthy absence. Safe to say everything I know about nanotechnology I've learned from Edward Lerner, well supported by the reading of Gabriel Sloyer, whose voice mesmerized me into believing I could wade through the murky waters of a field I previously knew nothing about. I became invested in the characters, particularly Kim, and marathoned through the ten hours of listening in two days. The ride was that suspenseful and bumpy that I, for one, did not want to leave this cautionary tale of science that potentially becomes larger than we are.

Lerner's surprises and "TECHNO FUN" sometimes leads to "TECHNO BABBLE" lol. Still, the book is an attractive fantasy if you like future thinking about Nano Suits and Bio Mischief. Nicely helped by Sloyer's multi-voices.

I like stories that pump the imagination. I selected Small Miracles and just sat back and waited for things to get strange. They do. The book goes well, detailing the development of nanotechnology, but needs work. There are third person threads, machines stepping up to speak, then lots of technical jargon and human rewiring. Best of all is probably the narrator who does stay on top of the story with some interesting voices as it progresses.

Which character – as performed by Gabriel Sloyer – was your favorite?

Did Small Miracles inspire you to do anything?