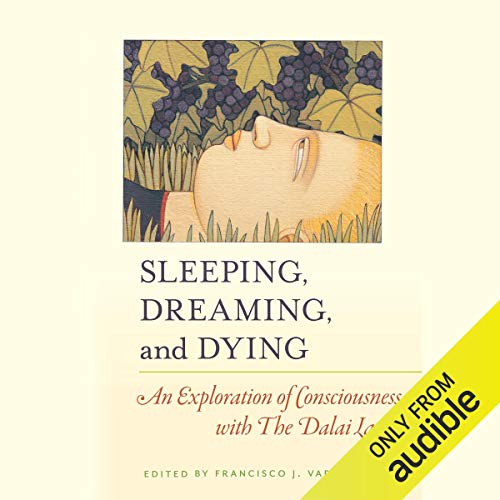 This is an absorbing account of a dialogue between leading Western scientists and the foremost representative of Buddhism today, the Dalai Lama of Tibet.

For modern science, the transitional states of consciousness lie at the forefront of research in many fields. For a Buddhist practitioner, these same states present crucial opportunities to explore and transform consciousness itself. This book is the account of a historic dialogue between leading Western scientists and the Dalai Lama of Tibet. Revolving around three key moments of consciousness - sleep, dreams, and death - the conversations recorded here are both engrossing and highly listenable. Whether the topic is lucid dreaming, near-death experiences, or the very structure of consciousness itself, the listener is continually surprised and delighted.

Narrated by Fajer Al-Kaisi, the book begins with insightful remarks on the notion of personal identity by noted philosopher Charles Taylor, author of the acclaimed Sources of Self. This sets the stage for Dr. Jerome Engel, Dr. Joyce MacDougal, and others to engage in extraordinary exchanges with the Dalai Lama on topics ranging from the neurology of sleep to the yoga of dreams.

Remarkable convergences between the Western scientific tradition and the Buddhist contemplative sciences are revealed. Dr. Jayne Gackenbach's discussion of lucid dreaming, for example, prompts a detailed and fascinating response from the Dalai Lama on the manipulation of dreams by Buddhist meditators. The conversations also reveal provocative divergences of opinion, as when the Dalai Lama expresses skepticism about near-death experiences as presented by Joan Halifax. The conversations are engrossing and highly listenable. Any listener interested in psychology, neuroscience, Buddhism, or the alternative worlds of dreams will surely enjoy Sleeping, Dreaming, and Dying.

What listeners say about Sleeping, Dreaming, and Dying

was captain Spock not available?

This isn't really a review since 10 minutes listening to this reader was like 3 hours listening to an accounting processer delineate the differences in state law for depreciating assets: I'm sure there are very valuable nuggets there for those interested in the topic, but Spock would put more humanity into the reading. I gave up After 10 minutes of cement being poured into my ears. Maybe I'll read it or hope for a different reader. I often wish Audible would give an option of three very different readers. I'm sure after a while they could develop a logarithm for what type of voices were most appreciated for what type of books.

Unlike any other book I have read

Enthralling overall. For someone who has journey’d through a near death experience and the wonderful and terrifying aftermath this book has offered some possible explanations for some of the experiences and post recovery feelings and thoughts. The book offers up many more questions than answers, however listening to a multidisciplinary panel of questions and opinions on subjects of consciousness and death has been invaluable compared with one alternative of picking myself up and dusting myself off. This book provokes thought and exploration

must reading for serious students

Must reading for serious students of cognitive science and mindsciences in general. same for Varela's Embodied Cognition.

Interesting, but a little dissatisfying

His Holiness starts out asking "teaching questions" as if he's trying to guide science to come to his own view, and by the end he's frequently relaying 'ghost stories', by which I mean secondhand accounts of supernatural events (possession, oracles, ghosts) which don't fit well in either the Buddhist framework or the Western. In between, there is certainly genuine Buddhist teaching and some genuine dialogue between the two cultures.

The scientists, for their part, do manage a middle ground, being respectful while asking some of the incisive questions a sceptical Westerner naturally has. However, as a group they often quickly forget careful distinctions that are introduced, most annoyingly continuing to bring up comparisons between ordinary orgasm and death well after it's clarified that the traditional Buddhist comparison extends only to a special ritual involving orgasm.

The Buddhist practices and beliefs which are discussed all relate to very specific convictions about reincarnation and how it comes to pass. How do Buddhists come to know these things, and why are they so certain? The challenge is never quite put to them.

This book is fantastic. I felt like I had a front row seat to the most intelligent discourse possible between mortals. Hanving just witnessed death first hand just a week ago with the loss of my Father in law, the descriptions of the subtle body really resonate with what I saw during his last moments.

there was some interesting discussion of sleep and NDEs, but you're better off reading a book about either of those things. nonsense may be a too strong word. I mean what they said about death and consciousness was useless info to me, and what they said about the mind I might understand with years of buddhist practice, but is nonsense otherwise

Bad accent made me return audiobook

This is a fascinating book and was read well by the narrator until he switched accents. If it was supposed to be an English accent then it was a poor impression. There were times when it sounded cockney, welsh and Irish, to be honest I couldn’t really tell what accent he was going for. It was so distracting that I decided to return the book and by the physical book as I couldn’t listen anymore to this narrator. Had he read the whole book in his normal accent it would have been fine as he read well and had a nice voice.