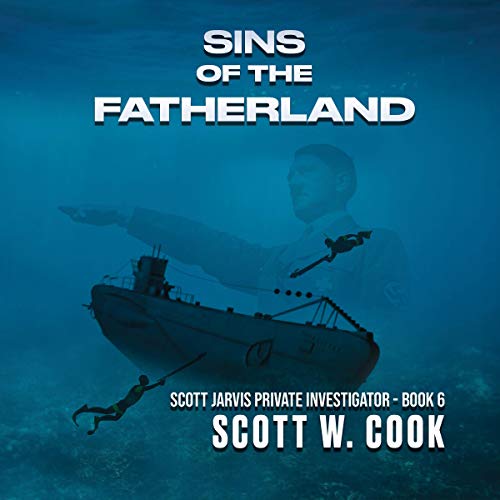 Sins of the Fatherland: A Florida Action Adventure Novel

A time bomb is ticking at the bottom of the Gulf of Mexico, and unless Orlando private investigator Scott Jarvis can find and disarm it in time, millions will suffer horribly.

On a sunny winter afternoon, Jarvis is doing nothing special when a new case walks into his life in the form of a beautiful blonde with flashing eyes. Jarvis doesn’t know it yet, but this new client is about to turn his life inside out.

Audrey Lambert and her grandfather need Jarvis’ special brand of hardboiled help, and they need it fast. Henry Lambert, the last survivor of an ill-fated submarine training cruise just after the close of World War 2, is holding Pandora’s Box, and the lid is already being pried open. It seems that Hitler isn’t quite done with the US, and the old man has a startling revelation that will thrust the young detective into the most dangerous and broad-reaching case of his life.

There’s something deadly hiding in the bowels of a sunken U-boat - something that if found by the wrong people could literally lay waste an entire nation. Now, an old man’s secret is out, and the hourglass is running down fast!

Jarvis must face personal danger and international intrigue - all while dealing with his personal loss. The past slams headlong into the present. Will the gritty investigator be able to defuse the situation before the pot boils over and a madman’s last evil deed scalds the world?

What listeners say about Sins of the Fatherland: A Florida Action Adventure Novel

This story held your attention and was a fun read. The characters were well developed and even though this is the latest in the series it was easy to follow all the characters if you haven't read the previous books. The ending was satisfying as well as the story arch.

This was the first Scott Jarvis book that I have ever listened to. Surprisingly, I did not feel as though I was missing too much.

This book was amazing! Action, intrigue and everything you can ask for in a good book. I loved the characters as well as the story. I was left guessing throughout the entire book.

Another great story by Scott Cook

Scott is an author who will always keep you guessing. This story feels like it could be real - and it's a pretty terrifying thought. Very interesting modern mystery flashing back to Nazi wartime. Enough twists and turns to keep you guessing until the very end. This might be my favorite of his stories.
Very good narration by Lee Strayer, fits the story well and brings out the flavor of Scott Cook's story. I know Scott Cook fans will devour this one!
I was provided this book in exchange for an honest review.

Spooky this could be true

Man, this one sent chills down my spine. If this were true?!?! Wow!
Great story, awesome characters, and sound chilling possibilities. I highly recommend this one!

Are you kidding me! I have been following this writer since book number one. I still can't forecast how things will end up. Always surprised, entertained and left missing the time I spent with the great characters Mr. Cook thinks up. Love the tid bits of history, cooking and sailing sprinkled in each roller coster ride. Can't wait to see what trouble he'll get into next. Jarvis for President!

I really enjoyed this book. It had the humor, action and intrigue we've come to expect from a Jarvis adventure with something extra thrown in. The historical submarine story could stand on its own and was gripping, exciting and tragic. The way the two weave together really makes this episode of Scott Jarvis stand out.

Once again, Lee Strayer does a fantastic job as narrator. He brings the characters and scenes to life and I wish he was narrating more books :)

I recommend this book highly to anyone who loves crime, action, adventure, thrillers all balanced with humor and a complex plot line.

"Trouble is my business."

Scott Jarvis is a PI, ex law enforcement and military, now turned best selling author, sharing his cases with the public. His long term girlfriend, Lisa, recently left him so no longer contributes to his books.
This time, Scott is asked to help find the location of two submarines which were sunk just after the ending of WWII, somewhere off the coast of Florida, and the story switches between Scott's present day story telling and the happenings in the submarines in 1945.

The chapters written in the first person, from Scott's perspective, give an immediacy to the action as well as a better insight into Scott's thinking. His style is flippant, sarcastic, opinionated (and usually right) and, at times, frankly annoying: He still 'scoffs' a lot and acts the Sherlock Holmes for fun.
The story is convoluted and crazy with action of both the violent and romantic type. Pretty good listening mostly down to the narration by Lee Strayer, who gives a good performance as the wise talking author P.I., voice replete with good humored banter and sarcasm, very pleasant on the ear, paced well and well intoned. His individual voicing of the separate characters is also well executed, keeping everyone distinct.

This is an enjoyable series for anyone enjoying slick talking protagonists and, although number six in the series, is perfectly good as a stand alone even if some earlier characters do appear in the book. The background story of the two boats was intriguing, the investigation was also enjoyable although the actual ending seemed a bit messy and quickly over. My thanks to the rights holder of Sins of the Fatherland who, at my request, freely gifted me with a complimentary copy via Audiobook Boom. I hope there will be another Scott Jarvis novel soon