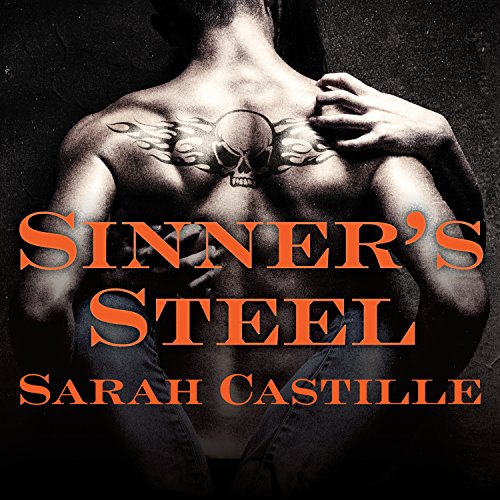 By: Sarah Castille
Narrated by: Chandra Skyye
Try for $0.00

Tall, dark, and dangerously handsome, Zane "Tracker" Colter is the strong, silent type of tattooed muscle biker who drives women wild. But as a master of strategy for the outlaw MC club, Sinner's Tribe, he doesn't have time to play around with groupies and biker chicks - especially when he can't stop thinking about Evie, the girl who got away....

Evie's been in love with Zane ever since they were children - until he broke her heart and disappeared. Now he's back in her life, bigger and badder than ever. Zane is stunned by how beautiful and confident Evie's become, using her artistic talent to customize motorcycles. He wants her so bad, he'd ride through fire to win her back. There's one problem: Evie is dating his deadliest rival - the leader of the Black Jacks - and if Evie and Zane hook up, there'll be hell to pay....

What listeners say about Sinner's Steel

Evie, Zane and Jagger (from bk 1) were inseparable childhood friends and, for one beautiful night, the respect and close bond grew into something much more between Evie and Zane but neither of them were prepared for the catastrophic events and heartache that would tear them apart for nine years. Now both of them have grown into very different people..... Zane is the handsome, tattooed, sexy but standoffish Vice Prez of the Sinner's Tribe MC and Evie is an independent divorced single Mom whose job and talents are spray painting custom designs on bikes. And when their worlds collide - biker style - it leads to pain-filled soul-bearing angst, MC gang drama, bloodshed, deaths and a whole host of collateral damage.... but it also leads to a reuniting, rekindling and reacquainting of two hearts that belonged together.

Evie is strong willed, she thinks she knows what's best for her and her son Ty and Zane initially doesn't know what he wants but he does know he doesn't want to let Evie, the woman that's always held his heart, the woman he's never forgotten, the woman he fantasizes about and the woman he's trying desperately to protect, walk out of his life..... or be taken out of it. Because she's been caught up in a vicious web by Viper, the President of the Jacks MC, and he's one cold-hearted, ruthless, sadistic, dangerous and vengeful enemy of both the Sinners and now Evie who becomes his unwilling pawn in the war between rival MCs.

What a great listen - from the very start I was sucked into all the unfolding drama and, as the action and on/off romance intensified, I was drawn into another mesmerizing MC listen where the bad ass leather wearing Alpha Heroes talk the talk, walk the walk and sizzle in the sheets. But when he loves he loves completely, would kill anyone that's stupid enough to threaten it, would die trying to protect it, worships your body and, when he marries you (biker style), he wraps around you a leather Cut saying you belong to him. Sigh-worthy, drool-worthy, romantic, touching, heartbreaking, adrenalin packed and there's plenty of sex scenes. The character growth and development was subtle and yet powerful too as the two ex lovers fight their way back, verbally, mentally and emotionally, into each other's hearts. Dual POV and the narrator did a great job with all the character's voices, their emotions and telling the story of the mine-field of unfolding events that will eventually (and happily) lead to second chances.

Worth a credit? Yes, yes, yes a million times yes a great mix a bikes, brotherhood, carnage, romance, sex and hot Alphas ..... but now which crazy Biker will be next to find his Old Lady?

Did I miss something?

Which character – as performed by Chandra Skyye – was your favorite?

I really liked the Zane but Evie was take her or leave her.

There was a couple of things that bothered me. 1. Where did the kid go? Who was taking care of him while mom was enjoying herself. The child just seems to come and go yet he was important to the story. Who baby sat him? 2. He left his kut with Jagger then he has it back at the grave site?

OMG THESE BOOKS ARE SO DAMN GREAT!!!!

I loved loved loved this book so much. I can not wait till the next book and" In Sarah we Trust" that she won't make us wait too long. I'm going to listen again. GET THIS WHOLE SERIES NOW!!!!! You will love it

I love the story line but the narrator was a little monotone in some places. but over all good.

I have enjoyed this series thus far! There isn't a HEA for all characters which makes it enjoyable. Also love the continuation of characters from previous books. often times series books forget about previous characters as though they never existed, this series, however, Incorporated the previous characters. Can't wait for T-Rex's story. What next? Perhaps Benson's story?

I so love this series and it has prompted me to start reading other works by the same author.

However, there is always a “but” right? I was not a huge fan of the narrator in book number one. Book number two it was even less likable because completely different characters sounded exactly the same. Now with this book, I just cant handle the narration style any more.

I loved this book all the way through, unfortunately there were also many times where the narrator performed a part that made me grit my teeth. Ive heard this narrator in other books and it was fine, but in a series I prefer different narrators when possible and ones that don’t make every strong heroine sound like a whiny teenager when reading anything but bedroom talk. On top of that issue, the talking style is so drawn out, so slow, I have to listen at the speed of 1.5 or I would never get through an entire book.

Im sorry to say that if I continue with the series I will likely read, not listen.

If they would have just communicated when they were younger everything would have been fine... But then this would not have been such a great story.

Bad-boy bikers and the strong women, they love. Hot and throbbing!

Love the story but again all of these books would be so much better with sexy male voice and the woman's voice. I like the change up in voices. it makes the story so much better Hot sexy and exciting.

With chaos surrounding them, Zane and Evie embark on a sinfully sensual and beautiful second chance romance. This was a story that kept me on my toes, made me frustrated at times, and left me smiling in the end. This is a page turner for sure. The Sinners Tribe MC have so much going on but their loyalty to one another is amazing. I enjoyed every single second of this story. Sarah Castille has yet to disappoint me. I am so glad that I was recommended her books
Narration was great!

I really like this author. this book was good. good enough I want to read the next.