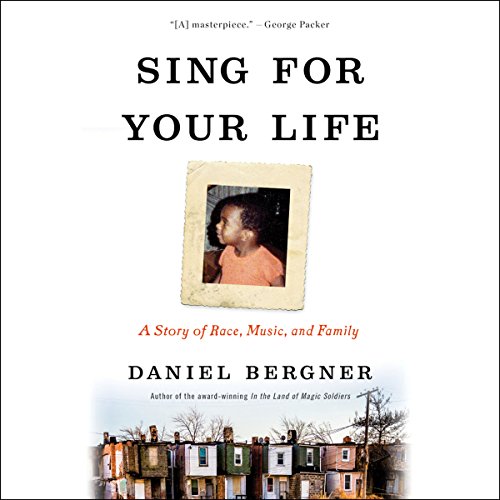 Sing for Your Life

By: Daniel Bergner
Narrated by: Ryan Vincent Anderson
Try for $0.00

The touching, triumphant story of a young Black man's journey from violence and despair to one of the world's most elite artistic institutions, as if The Blind Side were set in the world of opera.

Ryan Speedo Green had a tough upbringing in Southeastern Virginia: His family lived in a trailer park and later a bullet-riddled house across the street from drug dealers. His father was absent; his mother was volatile and abusive.

At the age of 12, Ryan was sent to Virginia's juvenile facility of last resort. He was placed in solitary confinement. He was uncontrollable, uncontainable, with little hope for the future.

In 2011, at the age of 24, Ryan won a nationwide competition hosted by New York's Metropolitan Opera, beating out 1,200 other talented singers. Today he is a rising star performing major roles at the Met and Europe's most prestigious opera houses.

Sing for Your Life chronicles Ryan's suspenseful, racially charged, and artistically intricate journey from solitary confinement to stardom. Daniel Bergner takes listeners on Ryan's path toward redemption, introducing us to a cast of memorable characters - including the two teachers from his childhood who redirected his rage into music and his long-lost father, who finally reappeared to hear Ryan sing. Bergner illuminates all that it takes - technically, creatively - to find and foster the beauty of the human voice. And Sing for Your Life sheds unique light on the enduring and complex realities of race in America.

"Sing for Your Life is absolutely riveting. Any rise to stardom in the daunting world of opera is bound to be dramatic, but Ryan Speedo Green's story is harrowing and rewarding in unexpected ways." (Renee Fleming)

"In Ryan Speedo Green we see a microcosm of American's own struggle to throw off the shackles of our troubled racial legacy.... His story, expertly told by Daniel Bergner, is proof of the possibility of all of our redemption." (Joy-Ann Reid, national correspondent for MSNBC and author of Fracture)

"Gripping and inspiring...Bergner chronicles the auditions and vocal contests as the struggles Green faces as a Black man entering a musical world that is mostly white, delivering a moving portrait of a young man who succeeds, along with the help of encouraging teachers." (Publishers Weekly)

What listeners say about Sing for Your Life

Made Me Want to See Him in an Opera

I heard about Sing for Your Life: A Story of Race, Music, and Family on a recent episode of The Daily Show with Trevor Noah. But before that, I went to my first opera in Vienna to see a majestic performance of Carmen. From that experience, I've become enraptured with wanting to see more opera, so when I heard about this book about Ryan Speedo Green a rising opera singer from New York I went on Audible and picked up the audiobook.

From the opening sentence I was enraptured in Ryan's plight. His upbringing is anything but conventional when it comes to opera singers. Daniel Bergner the biographer writing about Ryan's life does a great job of weaving his past and present to bring together a truly enriching story. Ryan started his life in a broken home, in and out of jail, and starting his life as far away from the opera as possible.

It wasn't until a couple, one his elementary teacher, and her husband a music teacher took Ryan under their wings, pushing Ryan to break free of the chains of his upbringing. The stories of his childhood set right next to the vast differential of his present is stark. Stories of a broken family, a brother who lives with his father, while he was brought up in a violent home with his mother. Probably the most profound stories are of Ryan in an institution in his early teens where he was sent after threatening to kill his mother.

I loved every moment of Sing for Your Life, but it felt like it might have been written ten or fifteen years to early. Beginning to hear about Ryan's breakthroughs in Vienna and New York were incredible but I think the story has more to tell. However, to this point Daniel Bergner put together an incredible story and one that made me jump on YouTube right after I finished the book to hear some of Ryan's brilliant singing

The biographer and Ryan Green are to be congratulated on a tour de force that covers an unlikely juxtaposition of contemporary issues and parts of society. It's not just that Greene is African American and becomes an opera singer, it's that he becomes one from the most unlikely and broken background and unobvious talent Through a series of good people who see something in him and go above and beyond to help him however they can, through his own redoubtable and resilient sense of purpose and intention , through unusual emotional strength, and above all through his perseverance and trust, he achieves his dreams.

The author does a thorough and sensitive job of telling his story, even diving into the inner world of opera and (sometimes arcane) vocal studies. And he tells it in a way that takes us into the auditions and hard work with nail-biting suspense. Having myself studied voice (with far more resources and far less success than Mr. Greene - singing well is not easy), Mr. Bergner brought it all back as intimately as if I were right there too. I found myself grinning or nodding in recognition many times.

I'm not an opera fan but really enjoyed the main character's interview on Fresh Air several weeks ago. So glad I decided to buy this book. Green's tough childhood, the mentors who had his back, the language and musical training he worked so hard to master - all are beautifully described and narrated. I'm rooting for Green's continued success and may well seek out his performances.

You can make a difference in someone's life.

What a wonderful story. One that is true and inspirational. it reminds us that each one of us can make a difference, not only in a child's life, but in an adult's life. Sometimes all they need is a chance and some encouragement. You may be surprised at what gift springs forth. Now I want to continue and follow Ryan's career. you can listen to him singing on YouTube.

And all the more so because it's a true story! It's moving and surprising and instructive-- about opera AND about race. I loved it (and It changed my perception of "Old Man River" forever.

I truly enjoyed this book, and the narrative done by Ryan Anderson kept me engrossed with the story. I can't wait to listen to more books by Mr Anderson.

After seeing Ryan Green on The Daily Show, I was expecting great things from this audiobook. I found it difficult to follow, with occasionally unclear jumping points between time periods. I lost interest and had to force myself to keep going until a more interesting section came up. A bit disappointing - did not live up to my expectations...

Sing for your life

This is an amazing story on multiple levels: the pursuit of a dream, the resilience to overcome significant adverse childhood experiences and the love of music make it a perfect story.

wow, this book really sucked! They put so many unnecessary words trying to describe every detail in every scene that you end up losing the story itself. Then there's some jumping around that makes no sense and I just couldn't get past chapter 4. If you're looking for great stories related to music, I recommend the Emperor of Sound by Timbaland. And to the writer: focus on telling the story not trying to impress your 9th grade English teacher.