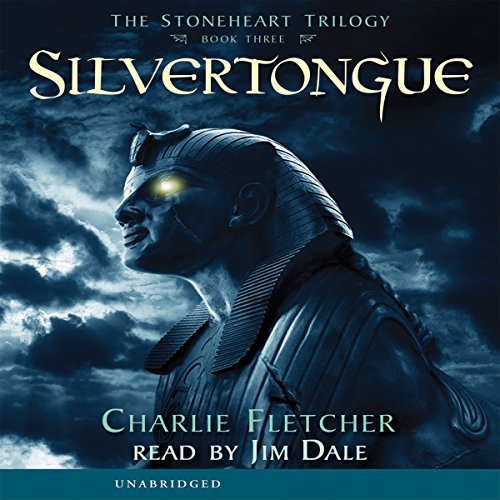 By: Charlie Fletcher
Narrated by: Jim Dale
Try for $0.00

Filled with intriguing suspense, invigorating action sequences, and well-developed characters, Silvertongue is a thrilling conclusion to the international blockbuster!

Rock on: listen to more in the Stoneheart trilogy.
©2009 Charlie Fletcher (P)2009 Scholastic

What listeners say about Silvertongue

Sad to see it end.

I am an adult in my 30's who is a kid at heart. I love Harry Potter, Percy Jackson, Artemis Fowl and the How to Train Your Dragon books among others. This trilogy is going to be added to those as a favorite of mine. Even though I had an idea of what the end would bring, I was still on pins and needles. Jim Dale is great as always and he adds tension and levity where called for. I would absolutely recommend this.

Fletcher mixes complexity and simplicity on so many levels, the result is absolutely captivating. Not only has he woven a fun story that can be enjoyed by any age, he brings many deeper issues to mind. Light and darkness, purpose and lack thereof, what makes us people instead of animals. This is truly an excellent book.

As always, Jim Dale performance leaves nothing to be desired. Supreme narration, good emotion, and, of course, the accent, make this a very pleasurable audiobook.

Fun series with great imagination. This would likely be particularly fun for those that know London well. As always, Jim Dale is fantastic.

Just as good as the first 2

If you could sum up Silvertongue in three words, what would they be?

A great series of books. My only comment was that when I thought this book had ended it actually had a few more chapters which didnt seem necessary. The last part of the book could have been truncated and the story would have seemed finished.

This one was good, bit not as.str9ng as the first two. that being said, I was still hoping for a part 4.

It was the best book ever made and I wish there was more books about it.

Great series! can't believe how fast it went by.

This is a fun world full of adventure! I recommend this to anyone who loves modern day fantasy's.

Alternate realities! what if?!

I really enjoyed listening to this book and the story. I'll probably not ever look at a statue or monument the same!

Such a great listen!

I thoroughly enjoyed this whole trilogy. And will listen again in the future.
Great story and Jim dale is my fave narrator.

this was a great series. I was so glad I picked these up. Charlie Fletcher is a great story teller for all ages. And of course Jim Dale was magnificent. Whether you are an adult or a teenager this book is a good read.