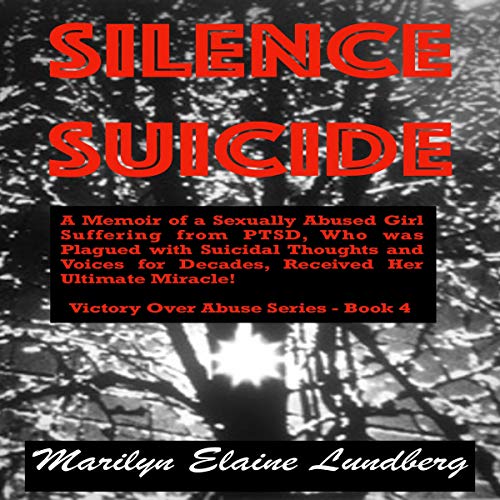 Silence Suicide: A Memoir of a Sexually Abused Girl Suffering from PTSD, Who Was Plagued with Suicidal Thoughts and Voices for Decades, Received Her Ultimate Miracle!

By: Marilyn Lundberg
Narrated by: Marilyn Elaine Lundberg
Try for $0.00

Here is Marilyn's most recent book in her Victory over Abuse series. She wants you to know that there absolutely can be healing following any great hardship. She lived and now wants to tell you the details of her excruciating pain followed by her triumphant victory!

True story of child abuse and the haunting voice of suicide and death. At the tender age of 13, a voice said to me, "Why don't you commit suicide?" I looked at the other kids nearby to see if anyone else heard the strange voice but saw no indication that they had. From that morning on, I heard suicide and death's harassing voice almost every day until my late 30s.

Before that morning in the hallway at school, the thought of me ending my life prematurely had never crossed my mind, even though I had a boatload of problems. Included in that long list of maladies was major depression, generalized anxiety, shyness, multiple personalities, anorexia, fear, and so much more.

As a child, teenager, and adult, the first 10 years of my life had been mostly erased. There were no memories of sexual abuse, but my body never forgot and replayed the disgusting events every night in the form of nightmares and night terrors.

Upon awakening every morning, tears stained my face and remembrances of the nighttime dreams played over and over again of people and animals chasing me, trapping me, and devouring me.

My smile was forced in order to fit in, but I knew from an early age that I was set apart and different from all the other kids, but I didn't know why.

My life was a living hell, and I was furious at God for not intervening. After all, I had attended church for the first 18 years of my life. I shouted at God in my head, "Where are you, and why aren't you helping me?"

I always knew that the suicide-and-death voice wanted me to die, but I told myself, "Not yet, I need to keep on fighting, so that I can figure out what's wrong with me!

Marilyn's message to you: Never give up; help is on the way to set you free from whatever is binding you! Listen to my short story today, and you, too, can be healed!

What listeners say about Silence Suicide: A Memoir of a Sexually Abused Girl Suffering from PTSD, Who Was Plagued with Suicidal Thoughts and Voices for Decades, Received Her Ultimate Miracle!