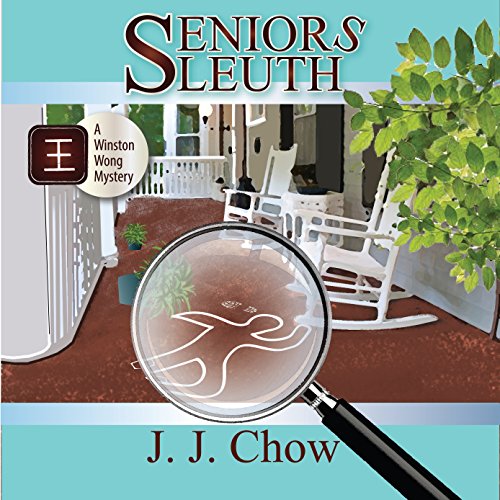 Winston Wong used to test video games but has left his downward-spiraling career to follow in the footsteps of Encyclopedia Brown, his favorite childhood detective. When the Pennysaver misprints his new job title, adding an extra S to his listing, Winston becomes a "seniors sleuth." He gets an easy first case, confirming the natural death of a 90-year-old man. However, under the surface of the bingo-loving senior home is a seedier world where a genuine homicide actually occurred. Winston finds himself surrounded by suspects on all sides: a slacker gamer administrator, a kind-hearted nurse, and a motley crew of eccentric residents. To validate his new career choice (and maybe win the girl), he must unravel the truth from a tangle of lies.

What listeners say about Seniors Sleuth

I found it entertaining

When I started I thought it was silly and I wasn't going to like it. However, as I continued listening, the eccentric Sleuth Winston Wong started to grow on me. I was concerned because he had solved the case with 4 hours left to go, but this book is filled with twists and turns and kept me entertained to the very end.

To enjoy this book, you can't overthink it. If you like stories that are completely plausible with fleshed out characters this probably isn't for you. However, if you like a cozy with a bumbling sleuth and quirky characters along with a storyline that isn't overly plausible but is entertaining I think you will like this book.

I REALLY LIKED IT, AND WANT MORE WINSTON WONG!!!

What made the experience of listening to Seniors Sleuth the most enjoyable?

It was a very well written and narrated story...I was absorbed from chapter 1!

When Winston first comes to the nursing home to visit...

This is a fun beginning to a cute series that I would like more of! Winston is a new Detective, he has been a video game tester and was trying to get into that business with no luck, and needs a new career...he accidentally botches his new business cards from Senior Sleuth to Seniors Sleuth..and lands a case investigating the death of an older gentlemen at a fancy senior living facility...well this case is more complex then he thought and although he meets some very interesting people this may be something he does not not want to know about...very good cozy mystery...and would love to continue this series...I recommend!!!

I ready book 2 and 3 first before I realized I missed book 1! So I went back to start from the beginning, and I’m glad I did! It did fill in a little extra background info, and added to the charm of these series. I really enjoy Winston as a character because he brings humor to the cozy mystery genre, and the narration is so well done. I really got immersed in all the different personalities and the ups & downs of the story.

I loved this book! It was one of my first cozy mysteries! I couldn't have picked a better one for it! I had several laugh-out-loud moments. It was so fun and Noah DeBiase did such a wonderful job with narration! Couldn't get enough!

Winston Wong used to test video games but has left his downward-spiraling career to follow in the footsteps of Encyclopedia Brown, his favorite childhood detective. When the Pennysaver misprints his new job title, adding an extra S to his listing, Winston becomes a "seniors sleuth." He gets an easy first case, confirming the natural death of a 90-year-old man. However, under the surface of the bingo-loving senior home is a seedier world where a genuine homicide actually occurred. Winston finds himself surrounded by suspects on all sides: a slacker gamer administrator, a kind-hearted nurse, and a motley crew of eccentric residents. To validate his new career choice (and maybe win the girl), he must unravel the truth from a tangle of lies.
This is a fairly light-hearted cozy, and a first in series. The author combines crime with an interesting Chinese-American family, especially the protagonist, who first horrified his family by a career in computer gaming instead of medicine or law, and *then* became an unofficial private investigator, sort of. We see a bit of his culture, but mostly, Winston is a rather charming, if a bit ditzy, man who bumbles his way to the truth, and finds out that investigating crime involving senior citizens can be far more complicated than he ever thought.

The book is well written, the characters 3 dimensional, involving, and, more to the point, do not stereotype senior citizens. The mystery is, as cozy mysteries should be, twisty and complicated enough to keep the reader guessing, and sorting through suspects along with Winston.

The narrator did a professional, competent job, and his very young sounding voice was appropriate for this book, I think. His reading rate, pronunciation, and character differentiation were very good, too, and he was able to imply age without going overboard, thus making his senior citizens sound like real people.

I look forward to seeing how the author is going to develop this series, and give both book and narrator 4 out of 5 stars.

I recieved this book as a gift with the promise I would leave an honest review. I really enjoyed this book. Both the story line and the narrator. It is a clean well written mystery.

If you could sum up Seniors Sleuth in three words, what would they be?

Charming, engaging, and technical.
The story, main character, and the narrator charm the socks right off of you, keeping you engaged in the story and invested in the characters. Dealing with nursing homes and medical supplies and conditions involves a lot of technical details that lost me a couple of times.

A murder mystery naturally keeps you guessing. There were plenty of suspects and motives introduced here, and on more than one occasion we think we figured it out!

What does Noah DeBiase bring to the story that you wouldn’t experience if you just read the book?

Noah had a tough job with the plethora of characters in this book. From the Asian main character to nursing home residents to whiny granddaughter, he sold it. At times I wished he brought more warmth to the story, but this wasn't the emotionally gripping story that I'm used to listening to.

Seniors Sleuth is a charming cozy mystery, clean and easy-to-listen to with a tiny smack of romance, a full range of characters, and a happy ending.
This audiobook was gifted to me in exchange for an honest review.

Average would be a stretch

I thought it would be an interesting listen for the two of us on a road trip. instead, it took multiple short trips to finish it; and I'm not sure it was worth all that effort.

Good intriguing plot, enjoy these quirky characters, and what they are into. Good flowing plots, and good narration. Given audio for my voluntary review and my honest opinion

Winston is not licensed as a PI, so he's decided to become a Senior Sleuth after his job as a video game tester evaporated. This is his first case and it is presented as a sham that would appease the client's elderly mother. But it becomes way more complicated than that as he does a respectable job of sleuthing and discovers the charms of a nurse at the Elderly Home where the action takes place. A really fun read!
Noah DeBiase is the expressive narrator!

This is the first book by this author I have read or listened to but it won't be the last because I really enjoyed and have already downloaded book two. I really liked the characters as they were well written and you could easily picture them as people. I found the main character to be likable and I liked the way he cleverly worked out who the killer was. The story had a number of twists that kept me changing my mind as to who the killer was and I think In the end I suspected everyone. The story had a little budding romance and family life to round the story up. All in all a great start to a series and one I will be keeping an eye out for the next release.
Winston Wong has just accepted his first case as private investigator. It should be easy, just visit a senior home and prove that the death of an elderly man was natural causes. His client is the grand daughter of one of the residents who has alzheimer and believes the dead man is her husband who died years ago. Winston soon finds out that things are not that simple firstly it wasn't natural causes and he finds his first investigation is actually a murder case. The suspect list should be small as he lived in a senior home but as Winston investigates he finds that it is not only the residents in the home that become suspects. The dead man had an ex-wife with a jealous husband, a computer geek for the homes manager and even the careers themselves look suspicious. Can Winston solve his first case?
I liked the narrator and thought he did a very good job with the characters, it was very easy to tell the characters apart because they all had there own voice.
I was given this free review copy audiobook at my request and have voluntarily left this review.