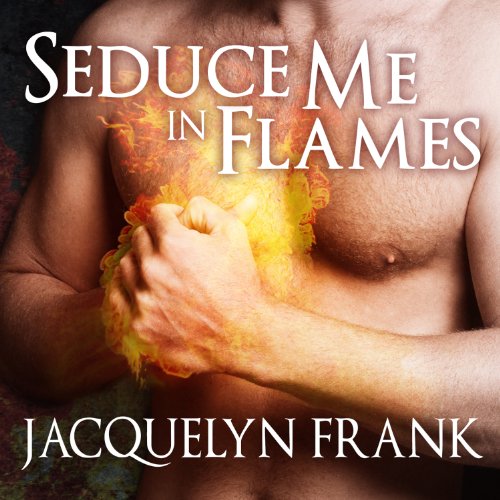 Seduce Me in Flames

Seduce Me in Flames

Icy reception. Smoldering deception. Blazing insurrection. Ambrea Vas Allay is the rightful heir to the throne of Allay. But when she is summoned home from exile, she discovers that her father, who had executed her mother, has died. Her young half-brother, controlled by their uncle, has taken power. Ambrea is torn by an impossible choice: renounce the crown or waste away in prison. The last thing she expects is to be liberated by a huge, tattooed Tarian - or to feel a searing passion for her mysterious rescuer.

Rush "Ender" Blakely loves being part of the elite force of the Interplanetary Militia and the mission to save the princess Allay. But the tough Tarian hides a fiery secret - a blazing power that makes him literally too hot to handle. He must be crazy to carry a torch for this strong, beautiful princess - when any intimacy between them is bound to be explosive. As Ambrea steels herself to take back the throne, does she dare entrust this scorching stranger with the fate of an empire - and, even more so, with her heart?

I absolutely love Jacquelyn Frank's books and this one is no exception. It has everything I've come to expect in her books - good plot, entertaining characters, romance and steamy sex. Although this one isn't as "hot" as some of her others, I still enjoyed it.
I'm looking forward to book 3 (if it ever comes out?).

I got this book on a sale and it was worth it! I even think that this book might be worth a credit. All the elements are here, romance, good hero's, magical powers, political intrigue and some mention of the characters from the first book. I read this book before reading the first one and it didn't get in the way at all.
It is not a 5 star because there were a bit too many emotions and their description had several redundant repetitions. The end was a bit weak although epic enough to get 4 stars. The heroine was neither dumb nor weak and had a good back bone which at times lacks in such books – that was a pleasant surprise. The side characters had nice story lines as well.
I am planning on buying the 1st book in the series.

I don't like this narrator. Her make voices are pretty annoying. Narrator aside, I didn't like the female main character.

Seduce me in other worlds

This author comes up with such wonderful concepts. I was already in love with several of her other narrators and this one just didn't measure up. The story, character, and setting are so mesmerizing however, that I still got dragged along just as willingly. I hope there are more of these.

Most of Frank’s books that I’ve picked up have ended up being DNF’ed. Something about her writing and her characters just strike me as totally contrived, poorly thought out and inane. This book is no exception. I like sci fi and sci fi romance. I like Lois McMaster Bujold, Linnea Sinclair and Michelle Diener. This story has way too much romance and not enough of a well developed plot. The female MC is worse than a cardboard Disney Princess (wussy, wimpy bleeding heart damsel in distress) and about as interesting. The male MC is your usual damaged alpha military hero. There’s too much inner monologuing and info dump. I am also not a fan of having so much face time with the evil and ambitious uncle and his even more evil and ambitious mistress.

I like the narrator although I didn’t care much for the evil uncle’s voice.

I love the paranormal works of Jacquelyn Frank. The story of the empires and the Interplanetary Militia keeps the listener's attention to the very end. The story is great and the narrator does an excellent job with the characters and the story.

What made the experience of listening to Seduce Me in Flames the most enjoyable?

The billed up to the romance parts was awesome and steamy

What was one of the most memorable moments of Seduce Me in Flames?

When she found out the truth about her Mother

What does Coleen Marlo bring to the story that you wouldn’t experience if you just read the book?

no which is great, I love long books.

This was great read, the narrator did an outstanding job and she delivered the Scottish accent to the (T). The billed up to the romance parts was awesome and steamy. I would suggest this book for people who love a Cinderella type novel. Wroth the money and I would order another book from his author!