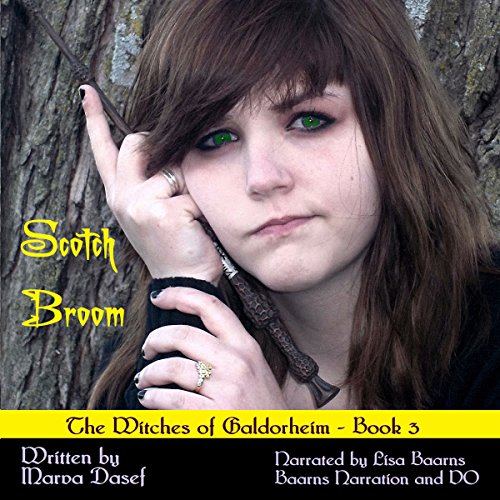 By: Marva Dasef
Narrated by: Lisa Baarns
Free with a 30-day trial

A magical trip to Stonehenge lands a witch in the Otherworld where an ancient goddess is up to no good.

Kat expects to have a great time on her graduation trip to Stonehenge. However, from the moment she leaves the witches' arctic island, Galdorheim, she gets in nothing but trouble. Her younger half-brother tries to horn in on her trip, she gets lost in the magical Otherworld realm, is led astray by a supposed friend, then she has to confront a Scottish goddess who's fallen on hard times. While dodging the goddess' minions and trying to find her way out of the Otherworld, Kat soon learns she shouldn't underestimate the old has-been for one second; the crone still has a few tricks that can drain a witch's magic in a flash. To make matters worse, Kat's brother secretly followed her into the Otherworld. Now he's in danger too. Kat has to go one on one with the goddess to save herself and her brother.

What listeners say about Scotch Broom

The latest, but hopefully not the last.

Where does Scotch Broom rank among all the audiobooks you’ve listened to so far?

Scotch Broom is among the best of the audiobooks I've listened to so far.

What was one of the most memorable moments of Scotch Broom?

My favorite sections of the book are Kat's meetings with her traveling companions in the otherworld: Sianach the stag, Cusith the green hound, Cait Sidhe the cat and Diamond the unicorn. Not the most dramatic sections of the book perhaps, but it is so refreshing to meet a group of fey creatures that haven't already been used over and over again in works of fantasy.

I have listened to several of Lisa Baarns' performances besides this one, they are all of uniformly high quality.

A young witch lost in the Otherworld, a scheming has-been goddess; what could possibly go wrong?

This is the third volume in the Witches of Galderheim series. I'm hoping for a fourth.

My Review is for the Narration

Where does Scotch Broom rank among all the audiobooks you’ve listened to so far?

As the author, I think this penultimate book in the Witches of Galdorheim series is the best one, so I'll rate it #1.

Lisa Baarns narration brings to life all the various characters. Given that a good portion of them are fairy animals, her ability to make it easy to distinguish between them is fantastic. The reader knows when there's a conversation between Sianach and Cusith, which one is speaking. At times, four characters in dialogue are all easily told one from another without unnecessary dialogue tags.

Glaistig, the gray lady vampire of Scotland, is wonderfully drawn with a sexy, but breathy voice. It's easy to hear Glaistig's ability to draw men to their death.

Nearly six hours is a very long time to listen straight through. I wouldn't think anybody would or could do that.

Lisa Baarns has narrated the entire Witches of Galdorheim series. She's done a fantastic job maintaining consistency of voice of the same characters throughout. In addition, she takes the personality of the new characters and makes them just as unique as the regular cast.

Exciting third installment to the Witches of Galdorheim series! This is a very entertaining series, and I loved this Book #3! Just when you think Kat & her brother can't get into any more trouble, anything and everything happens, including them winding up in the Otherworld realm! What exciting and interesting characters she meets - very fun listen, really enjoyed this series and hope there's more coming in the future. Loved the narration, as always, really enjoyable with all the amazing characters around! :) I was given this free review copy audiobook at my request and have voluntarily left this review. Please take a moment to click the "YES" ("Helpful") button below if you found this review helpful :) Thank you!