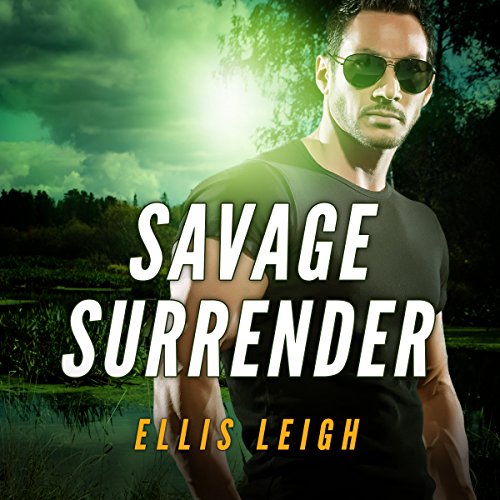 By: Ellis Leigh
Narrated by: Jarman Day-Bohn
Try for $0.00

There's no escaping a Dire Wolf on the hunt.

Feared by even his own kind, Bez of the Dire Wolf shifters knows exactly how to succeed in any battle. Even if that means racking up collateral damage along the way. A simple mission into the swamplands to save a teenage wolf shifter should have been an easy track and retrieval for a man with his training, but nothing comes easy when the fates get involved.

In one night, Omega Sariel went from a free, single shewolf to a captive with a teenage girl to watch over and a couple of guards intent on making her life, what little is left of it, miserable. Then a soldier with ice in his eyes walks in, and the mating call begins. He's too tough, too harsh, too murderous, but when your life hangs in the balance, a lethal fighter in your corner is better than battling alone. Especially one who isn't afraid to get a little dirty with her.

Two kidnapped women, one dangerous soldier unknowingly about to come face-to-face with fate, and a monster set on destroying everything in its path. In the world of the Dire Wolves, a retrieval is a simple mission for the unit of soldiers that make up their pack. But this time, a single glance blows simple right out of the swamp and forces Bez to make his stand alone.

One soldier, one fight, one chance at forever.

What listeners say about Savage Surrender

He found something he never thought on his mission

Great story,wonderful narration. Sent on a mission to retrieve a captured Omega..he found not one but 2...the one he was sent to find and...his mate. None of his Dire pack had found their mates yet. For the first time he,d ignore orders and take them both. Without backup he has to face the enemy pack.
loved it and will get the audios and books to complete the series.

I freaking loved this book when I read it, it was hot and just perfect for the first Dire Wolf finding his mate,
but damn if Jarman Day-Bohn didn't make it even hotter with how he voiced Bez' parts, I will never be able to hear about freckles again and not think about this book.

I listen to audio books a lot and have honestly never had a narrator do phone calls like Jarman did and I loved it.
I will be looking for more books done by him. I also look forward to more Dire Wolf books on audio

I have read this at some point. The character names and situations are very familiar.
It is rather repetitive, explaining the same thing multiple times. it goes on where it doesn't need to, and talking, and messin around while the bad guys are chasing.
I think this reads better, the drawn out descriptions and inner thoughts mess with the timing.
The narration is great, I like the difference in the sound of phone calls.

Truly captivating right from the beginning!

Love this story! It was truly captivating right from the beginning! I listened to the audiobook version of the story. The narrator was the perfect fit for Savage Surrender and absolutely holds ALL of your attention. This is a shorter book but it does not stop. There is no down time. It will consume you! The POVs go back and forth between Sariel, a kidnapped Omega wolf, and Bez, of the Dire Wolves. Bez is put on a mission to retrieve a kidnapped, teenage Omega wolf but when he finds her, there are two Omegas! He has to go against normal protocol to go back for the other Omega but there is a problem….they are mates! *wags eyebrows* So now there is this instant mating bond and both of them are having a hard time concentrating. Bez, going against every protocol and saves both Angelita, the teenage Omega, and Sariel, his mate and other Omega. There are so many things going on from the time they meet, escape, and get to the safe house. As they are able to assess the situation better, they find that the enemy has something else up their sleeve...and it is soooooo bad! As the enemy makes their way toward them, Bez and Sariel have to keep their heads about them and not give into the mating as it will make them extremely vulnerable. But once the fight happens, look out! If you listen to the book or read it, it will consume you and you will not be able to put it down. I can’t wait to continue this journey!

This series starter of the dire wolves has me hooked! Danger at every turn, desire that is off the chain, and nonstop action that kept me glued. Ellis Leigh made me fall in love with wolf shifters again. In a trope that had become repetitive and humdrum, Leigh gives it a spin that made me go gaga! Jarman Day-Bohn is...oh my!

A combination of romance and hand to hand combat made this book interesting and fun to read.

I will be looking for the next book in the series, the story was good , the main character should have allowed a little more intelligence.

I was lucky enough to win this first ebook audiobook I should say from the author in a contest at the end. I absolutely enjoyed the story the narrator the whole thing. I am looking forward to continuing this series. Dire Wolf mates werewolf packs and has it all.

A dire wolves mission hot
Oh yea I got to say this story is fantastic. So much depth to the story. I was hooked from page one and loved the way the author made the distinction between werewolf and wolf shifter wow! What a difference! Very cool.

Bez of the dire wolf shifters is a great hardened warrior. And I loved how Ellis wrote him so he didn't know how to deal with his mate. It made it seem so realistic. After all he has been a warrior for sooooo long.
Sariel is a kiddanaped omega and since their mates she can deal with him. Great insight. LOVE the action, drama, characters and wow this one just has it all. Don't miss it.
Great add to my library

Absolutely love this story and the whole Dire pack, strong men who find their fated mate.

Wonderful narration which makes listening a pleasure. Great inflection with the voices and a good pace. BOOK REVIEW 4.5 stars. This is a book from a new author I found in the Shifters in Spring box set and was free on Amazon. I just loved this book and the Dire Wolves, OMG. The biggest, baddest of all the wolf shifters out there. The story had loads of action and just kept me reading and I cannot wait to read about the rest of these really extraordinary pack of Dire Wolves. I loved the instant knowing that the one you are seeing is your mate but it was not in a silly way, it was sensible, grown up and enjoyable. I have read the short bonus follow up to this (Savage Surrender-Homecoming) which is free from the authors newsletter, so if you like this book make sure to get and read this too. I have just started book two in this series and had to force myself to put it down to write this review. I am going to have to read her other series Feral Breed MC even though I am not into biker books.