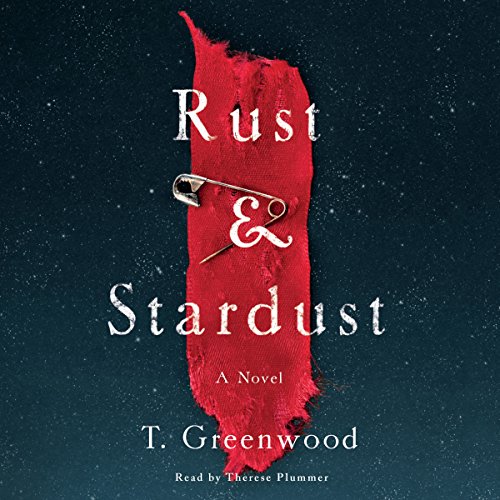 By: T. Greenwood
Narrated by: Thérèse Plummer
Try for $0.00

Based on the experiences of real-life kidnapping victim Sally Horner and her captor, whose story shocked the nation and inspired Vladimir Nabokov to write his controversial and iconic Lolita, Rust & Stardust is a heart-pounding audiobook by award-winning author T. Greenwood, who at last gives a voice to Sally herself.

Camden, NJ, 1948. When 11-year-old Sally Horner steals a notebook from the local Woolworth's, she has no way of knowing that 52 year-old Frank LaSalle, fresh out of prison, is watching her, preparing to make his move. Accosting her outside the store, Frank convinces Sally that he’s an FBI agent who can have her arrested in a minute - unless she does as he says.

This chilling audiobook traces the next two harrowing years as Frank mentally and physically assaults Sally while the two of them travel westward from Camden to San Jose, forever altering not only her life, but the lives of her family, friends, and those she meets along the way.

“Heartrending.... Readers who relish novels based on true events will be both riveted and disturbed by this retelling of one of America’s most famous abduction cases.” (Library Journal)

What listeners say about Rust & Stardust

Absolutely no words to describe how moved I am. I could not stop listening. Definitely worth the credit

I was already aware of the story on which this book is based. The narrative is raw and detailed and puts you into the mind of a very young victim. There is limited insight into the mind of the kidnapper, but this is probably for the best. It does an excellent job of bringing the thoughts and feelings of the kidnapping victim’s family members to life, too. I highly recommend this book, though it’s not for the faint of heart.

cried q lot when reading this, just don't understand how people can hurt other people like this. the writing is excellent and the narrator was great!!!!!

This grabs your attention from the very beginning - the narration is perfect and i couldn’t stop listening until the very end.

I didn’t even realize it was historical FICTION until the end. It was written in a way that alluded to sex. It would have been unbearable to read otherwise. I commend the author’s imagination filling in the gaps in the real case with believable moments and relationships. Character development was great, just very rich and full of details from that era. The main character has stayed with me. She really was fully formed. Bravo. PS the author did t develop one main character. I think it only accentuates the fact that he had no soul.

It's beautifully written, captivating story of a young girl abducted by older man. Performance was amazing and very accurate.

The story the girl, the times, I could not stop listening. Based on a true story this guy would have been tracked down a lot sooner than this if this happened now. Back in the 50's neighboring states law enforcement barely communicated.

One of the best books I've every read..

this was one of the best books I've ever read,,, and the first book that ever made me cry. It just kept going on and surprising me with every little event that occurred. Even in the end with the author's note was another surprise altogether. This was one of the books that I could never put down and just had to finish from beginning to end. great work T Greenwood.

What an intense, beautiful and distressing story.

Based on the kidnapping of 11 year old Sally Horner in 1948, this book caused such powerful emotional reactions in me that I was sometimes shouting at characters, sometimes begging them out loud to make different choices and sometimes just sobbing and sobbing. The writing is exquisite and the author has the ability to create characters that you dislike but still have empathy for. Thank goodness there are always people like Al and Ruth to offset the evilness of people like Frank. Most of us is somewhere on a continuum between these two extremes as shown by all the other characters in the book.

To take the bare bones of what little was know of this abduction and add so much thought, feeling and depth to it, takes true talent. I listened to the audio and the narration was perfect.

I know that part of the hype around this book is that Nabokov's Lolita character was somewhat based on Sally, but for me I think it's much more important that this little, lonely girl, who had so many things taken from her are remembered by us, if only for a while.

One of the best-written, most upsetting and deserving books I've read. One of my top 2018 reads. Right up there with the heart's invisible furies, everything here is beautiful, an american marriage and white chrysanthemum.

I loved this book. My heart broke for nearly every character involved with Sally. Sally is such a strong character. All the saints placed in her path were special and I appreciate the follow up on their lives after Sally.