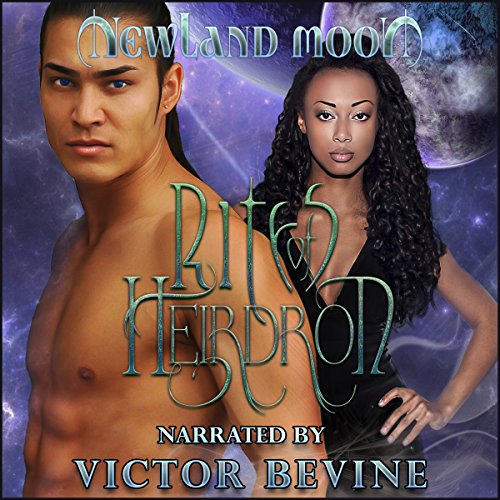 By: Newland Moon
Narrated by: Victor Bevine
Try for $0.00

They poisoned his planet, massacred his people, and violated his mother. Now, they're coming for him.

A bastard prince born to a dishonored queen, Zrahnz is the last hope of a dying world nearly decimated after a treacherous interplanetary betrayal. He struggles to reclaim his legitimacy as a ruler and for his planet's survival. But as he endeavors to unravel the manipulations of the past, a debilitating illness threatens his sanity and his life. If he cannot save himself, his planet will succumb to the corrupt intergalactic alliances aligned against them.

The irrepressible allure he feels for an Earth-born visitor, Itanya, threatens to overwhelm him, yet through her, Zrahnz discovers the secret that can ease the devastating agony of his illness. Could she be the key to his survival and the future of Triaxeyn?

With Q-1 Raydren at his side, and with the influence of the Oracles, he discovers corrupted truths and a forgotten prophecy. But he must make a crucial, life-saving decision, or else his people and everyone he loves could be destroyed.

What listeners say about Rites of Heirdron

I have became a true fan of this author. I appreciate the depth that she puts into her stories. This is the first of her books that I have listen to on here. The outcome was a joy for me. This is a must to put on your future lists of books to check out.

Would you listen to Rites of Heirdron again? Why?

Absolutely yes! The story is compelling and the narration and voicing by Mr. Bevine is excellent. This is my first buy of an audio novel (I've listened to several nonfiction titles before) and I've been very pleasantly surprised by how easy it is to follow along with the audible version, even though I can't listen for very long periods at one time. Turn it on again, and I pick right up where I left off! I don't know if that's all because of the author's talent, or the narrator. Either way, it's a great combination.

What was one of the most memorable moments of Rites of Heirdron?

It's very hard to point to just one moment, mainly because one of the main themes of the story -- the love story with Prince Zranz and Itanya, a woman from Earth -- moves so smoothly and is interwoven so skillfully with the subplots and other characters. I'm an engineer, and sadly not much of a romantic, but sharing the budding of their deep love and commitment in the midst of great trials was moving through and through. Bevine does a great job in bringing the emotions to life as they develop with the plot.

I think Bevine has helped my appreciation in two ways. First, like I mentioned before, he really projects the emotions that the characters are experiencing. It's almost like hearing it in real time. He makes it very believable! Second, I have a bad habit of starting to skim when I get in the middle of a page-turner like Rites of Heirdron. The narration forces me to keep a more consistent pace and allows me to better appreciate some of the nuances and details of the scenes and plot twists that are packed into the story.

Towards the end of the novel, the prince is attacked in a completely unforeseen move by one of the minor characters, and Itanya instinctively and heroically reacts. Don't want to say more about it, because I don't want to provide a spoiler, but the betrayal and Itanya's selfless reaction to it were very moving.

I've enjoyed this audible book so much I've started through it again; not because I'm afraid I might have missed something, but just because it was so enjoyable that I want to do it all again. My only fear at this point is that this sets the bar so high I hope I won't be disappointed by the sequel or by other Audible books. I'm definitely going to research for other titles that Bevine narrates, he has a great voice and talent.

What made the experience of listening to Rites of Heirdron the most enjoyable?

Listening to Victor Bevine bring the character and story to life.

You a can feel the emotions of the characters and drama of the scenes. It is like you are there.

The shadow whisperers and how they manipulate the characters. Victor really brings them to life. This is a fantastic story with a talented narrator.

When I first won this book, I didn’t know what to expect. Most science fiction romances are similar with not much to the plot. Not this one! Rites of Heirdron is reminiscent of an epic fantasy with futuristic elements. I loved it!

Zrahnz’s struggles are heart-wrenching and I couldn’t decide if I loved him or Q-1 Raydren more. In actuality, there’s more than one romance in this novel. That was an unexpected pleasure and added more to the depth of not only the plot, but also the characters.

Itanya was another great character. At first, I wasn’t sure what to think about her being a part of his “laranhge.” (That’s the equivalent of a harem). As the story progressed, I fell in love with her and realized she was one of the most intriguing and important characters in the story. I can’t wait to find out everything about her past and family.

There’s so many aspects to this story with mind manipulators, shadow whisperers, core beings, spirit wielders, oracles, and many more, Rites of Heirdron is filled with intrigue, twists, and action.

The influence of the shadow whisperers was dynamic! I am hoping for much more of them in the next book.

In conclusion, I’m thrilled to recommend this book 100%! It’s not your average science fantasy romance and will leave you wanting more! Victor Bevine brought an already fantastic story to life!

Everything was great! Storyline memorable, the narrator brought the characters to life. Can't wait for Book 2!!! Will def recommend to other readers

What did you love best about Rites of Heirdron?

What other book might you compare Rites of Heirdron to and why?

Rize of Nazil has similar elegance

It made both very angry and very elated.

Just read it !! ... or listen Must have booked two 😱😭 I really didn't expect this book to be so good. I felt like I was listening to a beautiful epic drama. The way it was written was awesome. I know the cover isn't so satisfying and appealing. But the old saying don't judge a book by its cover!! The author really does know how to tell a really good story.

Barely made it through 2 chapters. 😱 All kinds or weird mysticism mixed with biological warfare, harems & sex in a nonsensical method of presentation in the span of 2 chapters! 🙄

Rites of Heirdron took me on an exciting, emotional ride through galactic worlds brimming with love, war, betrayal and debauchery. I enjoyed the balance of intellectual and emotional titillation. Newland Moon told a wonderful tale here and it was hard to put down--all the way up to the very end.