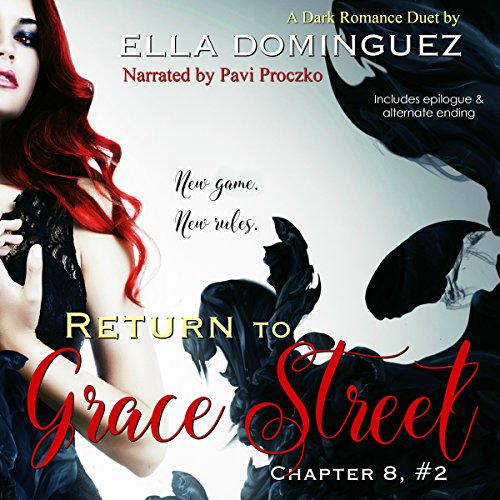 Victor tried to stay away - he couldn't. He tried to start a new chapter, only to waste time. He did his best to keep his demons at bay, but it proved to be an impossible task. Now, Mr. Black is back to take what's his and face-off with the one player who beat him at his own game. Only this time he aims to win, even if his methods mean risking everything - including his job, reputation and what little of his sanity remains.

Having moved past the emotional heartbreak and physical torture that Mr. Black put her through, Elsa's life is back on track. With a new love in her life and her future secure, she's horrified and angry when he reappears, threatening his wrath if she doesn't play his twisted game again. But despite being haunted by his dark, untold secrets, she's a different woman now - stronger than before and far more resilient. And more importantly, determined to make her own rules.

This time around, both players are on equal ground. They will play with such passion and ferocity that their very existence is threatened, because in their eyes, there can be only one winner and there is no conceding when your mental and physical freedom is at stake.

What listeners say about Return to Grace Street

I have thoroughly enjoyed this book. I'm so glad that I purchased the second audio at the same time as the first. I would have been miserable not hearing the second half of Victors
story. It had just what I love in an audio. An obsessive alpha with control issues and a sassy heroin that won't give up. Then narrator was good at times. Same as with the first audio at times I did feel like I was listening to a robot but the story kept me listening. I would definitely recommend this psychological mind bender to anyone who loves a good messed up story.

Book 2 blew me away!

Usually, I find the second book of a duet disappointing. Since book one had such an original plot, I thought I knew what to expect. Boy, was I wrong! Book two was hotter and more chilling at the same time! Pavi's voice is incredible. I had goosebumps when Mr. Black would make an appearance! It is rare that a man can mimic a woman's voice so convincingly. His Elsa was perfect.
Ella Dominguez keeps us guessing until the end, and thrills with an awesome twist. Victor's character development was marvelous to witness and Elsa's strength was stunning. I didn't know she had it in her!