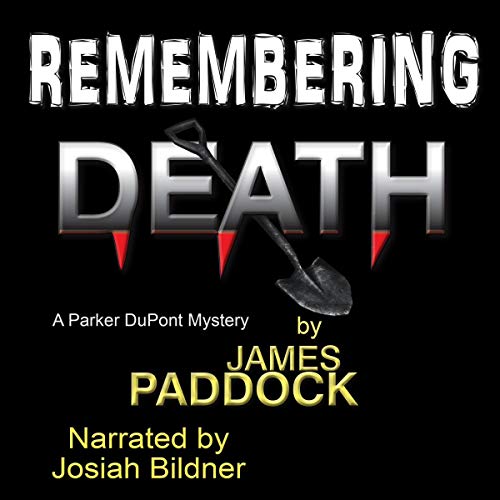 Lester Winters, in the early stages of Alzheimer’s, submits to an experimental procedure (a pacemaker for his brain) to restore his memory. He first recalls a dead woman who, it is assumed by his wife, is his mother from years past. As weeks go by and Lester’s "pacemaker" does its job, he recalls that it is Caroline who is dead, not his mother.

His wife decides that it’d be prudent to hire an attorney to help find the answers. The attorney hires Parker DuPont, who soon discovers there is a lot more to Lester’s memory than just a dead woman by the name of Caroline. He remembers where she is buried. He also remembers the face of the killer and is scared into silence that the killer remembers him.

What listeners say about Remembering Death

I enjoyed this book a lot.It got to be too long and a bit confusing by the end.Parker used to be a cop.Now he is a P.I. investigating a possible murder seen by a man with alzheimers.Well developed characters,but I missed book 1.Narration by Josiah John Bildner was very good.I was given this free review copy audiobook at my request and have voluntarily left this review.'

A good twist, if he had known how much the pacemaker would recall would he have done it. Good absorbing story to the end. Well done. Given audio for my voluntary review

I will look for other books that he narrated! Great job! Really made me feel like I was there.

I can’t tell if it’s the writing or the bad narrator, but this was a hard listen. The story was predictable.

I enjoyed this book a lot.It got to be too long and a bit confusing by the end.Parker used to be a cop.Now he is a P.I. investigating a possible murder seen by a man with alzheimers.Well developed characters,but I missed book 1.Narration by Josiah John Bildner was very good.I was given this free review copy audiobook at my request and have voluntarily left this review.'

I'm a really conflicted about this novel. I liked the premise, the writing, the characters. The flow until about 60% is perfect, the mystery kept you guessing, but after that the mystery is put aside when they found the culprit and start chasing them. There is a twist at the end, but not enough to make this a five star. If you like action packed full of tension and fast pacing mystery, this is for you.

I think the narrator was perfect for the job, I like all his different voices, pacing and overall narration.

Didn't want the story to end.

Another brilliant listen from James Paddock. The plot was pretty unique and the story was fast paced and gripping. I loved the interaction between Parker and his children in particula his 10 year old son Scott, some of it quite amusing.... Avoiding any spoilers... Dad says, Why are you wearing odd socks? Scott: They were the same colour when I put them on! had me chuckling out loud. All the characters are well developed and believable. Josiah John Bildner once again does a superb job of the narration as he did in book 1. I like the fact that time and attention has been spent on the narrative such as the difference in the acoustics when Parker is talking to someone on the phone, it actually sounds as if that is what is happening. All this adds to the realism and hence the enjoyment of the book in my opinion. I look forward to listening to more of both this author and narrator in the future.
This audiobook was kindly given to me for free by the author and I provided this voluntary review.